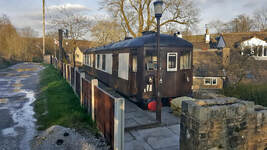 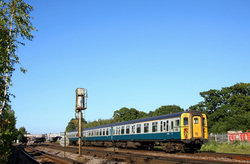 The 16:59 off Brockenhurst using 1497 gets away bang on time going to Lymington Pier.Two 3-CIG's were held back to operate this service,this blue/cream unit and the other(1498) in Southern-Green.I preferred this one as much more photogenic (In my opinion only of coarse!). 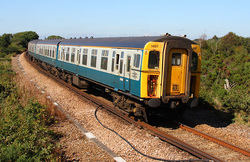 Speeding? through the open countryside in the New-Forest shortly after  veering away from the mainline at Brockenhurst 3-CIG 1497 heads for Lymington on the 14:29 service . 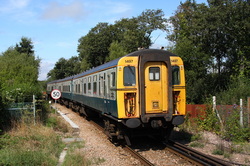 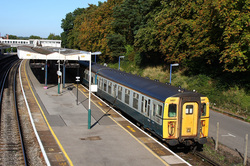 3-CIG 1497 prepares to depart with the 16:29 to Lymington Pier.By the late afternoon the sun has moved round hence was able to get a shot in the platform here at the mainline station at Brockenhurst. 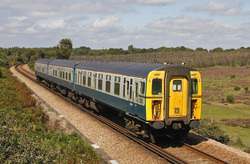 Class-421 '3CIG' 1497 survived to eek out its final years working the
Lymington branch out of Brockenhurst in Hampshire.Here is that Blue and
Grey Unit crossing the heath-land in the New Forest with an Brockenhurst to
Lymington Harbour working.They lasted a further eight months finally being
replaced by SWT Class-158's as from 22 may 2010. This unit  has been
passed on into the world of preservation albeit just as hauled stock. 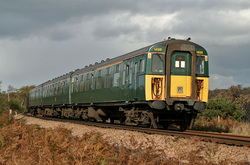 Class 421/7 4CIG 1498 worked out its final 5 years of active service exclusively on the Brockenhurst to Lymington Harbour Branch with the occasional trips to Eastleigh for turning purposes.Here it is seen with an early afternoon service to Lymington passing Milky Pound Bottom,a nice area of New Forest heathland with good open spaces alongside the line.This EMU was finally taken out of service in 2010 thus bringing to an end the use of 'slam-door' Units on the Southern 3rd rail network.Today it resides basically as loco-hauled stock on the preserved Epping & Onger Railway although currently it is being offered for sale? 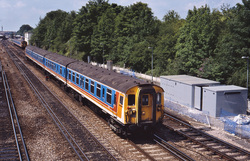 Third-Rail EMU Class 411 4-CEP 1539 heads away from Basingstoke working towards Waterloo with an Up Table-84 service. 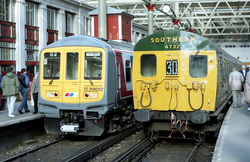 A comparison of the 'Old' and at that time the very newest EMU's.Brand new Dual-voltage 319002 sits alongside Class 405 4-SUB 4732 (Part of the National Collection) in Waterloo on 'Network Day'.These cheap yearly travel days were extreemly popular while they lasted.I went on most of them.