Very few GT's ever ran in the UK.This particular one 18000 is the only one still in existence. 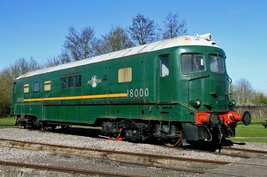 After several visits here to the Didcot Railway Centre I have finally managed a shot in the sun of the original 1949-WR Gas-Turbine 18000 unobstructed with nothing else around it.This engine only survived into preservation due to being exported back to Switzerland to its builders Brown Boveri CIE in 1964 for experimental use.After that it was plinthed in Vienna until it returned to the UK in the mid 1990's.It is now owned by the Pete Waterman Trust.It would be nice to see it in the original Black and Silver that was the scheme used by prototype diesels-etc in the early 1950's.