A member of the 'Pacer' family of units based on busbodies.Introduced in 1985.25 2-car sets originally built. 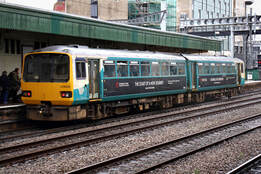 'Bouncy-Bus' 143609 pauses to collect passengers in platform-2 of Cardiff-Central whilst working '2G62' the 14:15 from Maesteg going all the way to Cheltenham Spa. 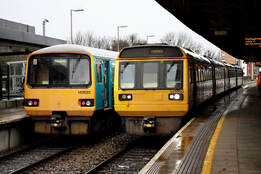 Love then or hate them the 'Pacers' have been part of the railway scene now for 35 years or so and only now in 2020 are they finally to be phased out nationally,well the Northern Franchise ones are anyway.No end date yet  for the S-Wales versions but before the end of 2020 is a possibility.
So here are the front ends of 2 different styles od pacer.The older version being shown as 142006 whilst 143622 with its neater styling was the next version. Both seen working away quite happily in Cardiff-Central.These 4-wheeled railbusses currently forming the backbone of most of the local services.
..19 february 2020.. 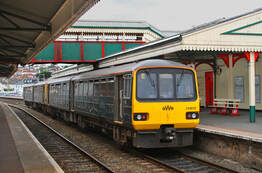 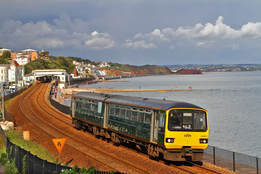 143612 gets away from Dawlish on a 'flat calm' sunny day here in South Devon.This time of year here is quite pleasurable if the weather is kind.Most tourists are long gone and the traffic situation is quite good.The working is '2T20' the 14:23 from Exmouth to Paignton. 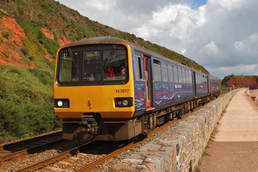 Apparantly this is now the only Class-143 with GWR still wearing the FGW-Blue Dymanic lines colours.Here it works in tandem with an unknown Dogbox Class-153 on '2T15' the 11:23 from Exmouth working to Paignton. 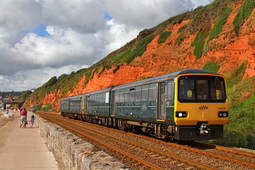 A double helping of Bouncy-Buses 143618/14361 motor along the seawall at Dawlish with '2F21' the 10:35 from Paignton heading for Exmouth.Originally these Units were supposed to be taken off lease and were never supposed to get of coat of the new GWR-Green.However because of the extreme delays to the cascade process due to the Electrification fiasco the 143's were retained (for now) and got a coat of the durgy-green! Desperate or what? 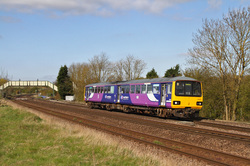 In 'Northern' colours one of the much-maligned 'Pacers' 144011 bounces past New Barnetby on '2H03' the 0803 from Sheffield heading for Cleethorpes. 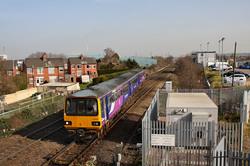 'Northern' Nodding-Donkey 144020 is seen completing its run-round after it had arrived and terminated at Knottingley.This view is from the English Lane Footbridge East of there.After arrival back at the station it will form '2F20' the 14:16 service to Leeds. 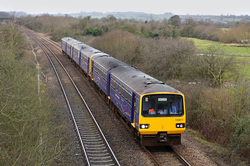 Today a rather unique ECS took place operating from Exeter-Fueling Point going to Bristol-SFM.Running as '5Z74' it comprised three 'Donkeys'.They were 143611/143618 and 143620.They were routed this way via Fairwood at Westbury as the more direct route from Taunton up to Bristol is still currently closed due to extreme flooding.Probably going to SFM in Bristol for servicing as their normal service-depot Laira-Plymouth is unavailable because of the Dawlish Sea Wall collapse. 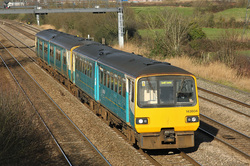 A combination of 143604 and 150278 from Arrive-Trains-Wales runs down the fastline at Duffryn going to Cardiff-Central.I presume this is an extra shuttle type service aimed at all the passengers wanting to depart from Cardiff after the Rugby International against Ireland that was due to finish about now.No timetabled working matching this path! 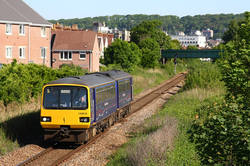 Bus-Bodied 143618 seen departing from Weston-Super-Mare with the 08:12 from Bristol-Parkway going to Taunton.Location is the single line that serves the Station at Weston-S-Mare.Picture shot from the Sunnyside Road Footbridge. 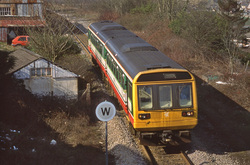 The usual photo opportunity off this bridge was in the early morning (07:00 to 07:30) however just for a change a late afternoon shot was tried here at Tir-Phil on the Rhymney-Valley Line.To confuse people even further it is a shot of  a 'Bouncy-Bus' 143069 sporting the local Welsh-Valley Lines livery.This working from Rhymney was slowing for the station.This was the second stop after Pontlottyn from the top of the line.This particular working appears to be going to Penarth although it fact it is probably only going as far as Cardiff.