Occasional pictures of non-English Railways will appear here.Mainly taken whilst on holiday with the family usually when ashore during Cruises.
​All shots taken in this gallery are mainly with a 12m-pixel Fiji Finepix Compact AV130. 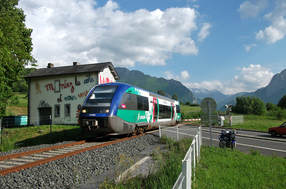 ​Here is a Class-X73500 single-car DMU working away from Bedous with the 18:39 from Bedous going to Pau.This line from Oleron-Sainte-Marie to Bedous has been recently re-opened with the eventual aim  of  bringing the entire line through the Pyrenees from Pau down to Canfranc in Spain and beyond back into use as a major international freight/passenger route.It was closed in 1970 when a rail accident destroyed a large bridge and at that time was deemed uneconomical to replace. Note my faithful Suzuki 600 Bandit parked adjacent to the crossing that I used to get here from the UK for my 10-day tour of this region. 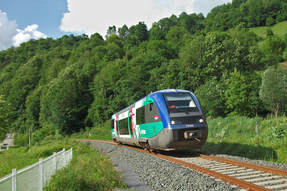 From the 15th to the 24th of this month I was off on a motorcycle tour of the Pyrenees in Spain and France.This shot was taken at Bedous near where we rented a cottage for the week.No bulky EOS--SLR's for me that week.This shot was taken on a small Fiji-Finepix pocket 12m pixel AV-135 c/w definite shutter-lag so shots of moving trains was a very hit or miss affair!.   Here is a Class-X73500 Althom-DDF single-car DMU working the 17:11 from Pau to Bedous.This unit being 73753 in SNCF-Aquitaine colours.The line was recently reopened again after being closed since 1970.Indeed the entire closed line right through to Spain is being rebuilt in the next 5 years to become a major international freight route once again. 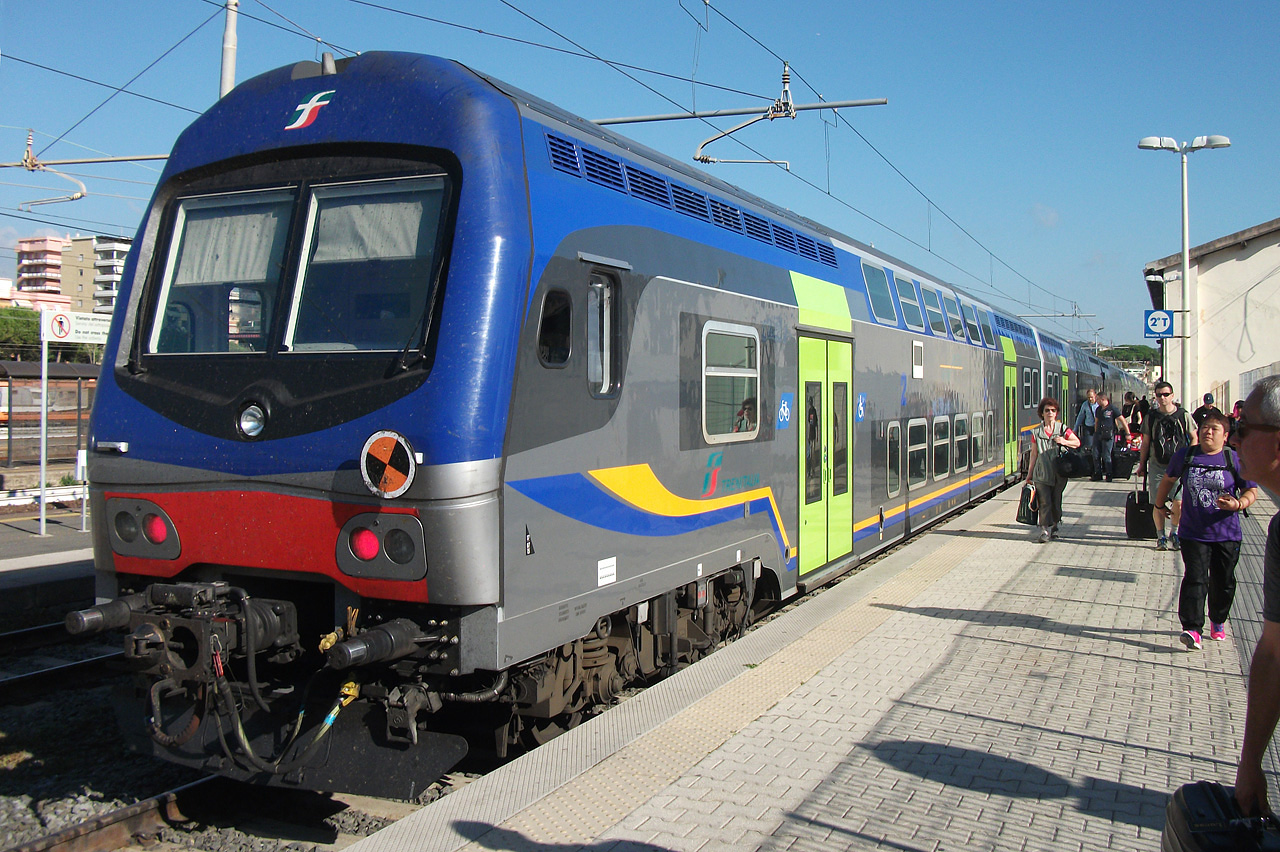 This is the DVT-end of the 14:46 from Roma-Termini to Civitiavecchia
shortly after it had reach its and my destination.The other end has a single-
cab B0-B0 Class-454 electric loco.The entire train was double decked
making for plenty of seating capacity. 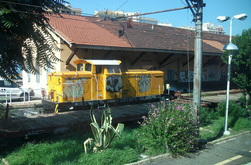 Parked up in an engineering siding at Roma-Tuscolaria this small Centre-Cab
graffitti covered Shunter was seen as I was sitting on the upper floor of a
push/pull double-decker working from Roma-Termini taking me back to
Civitiavecchia.A near 40 mile journey for which I paid 12 euro's return fare.
Oh yes and there were plenty of seats and the A/C was working perfectly.
FGW are you reading this! 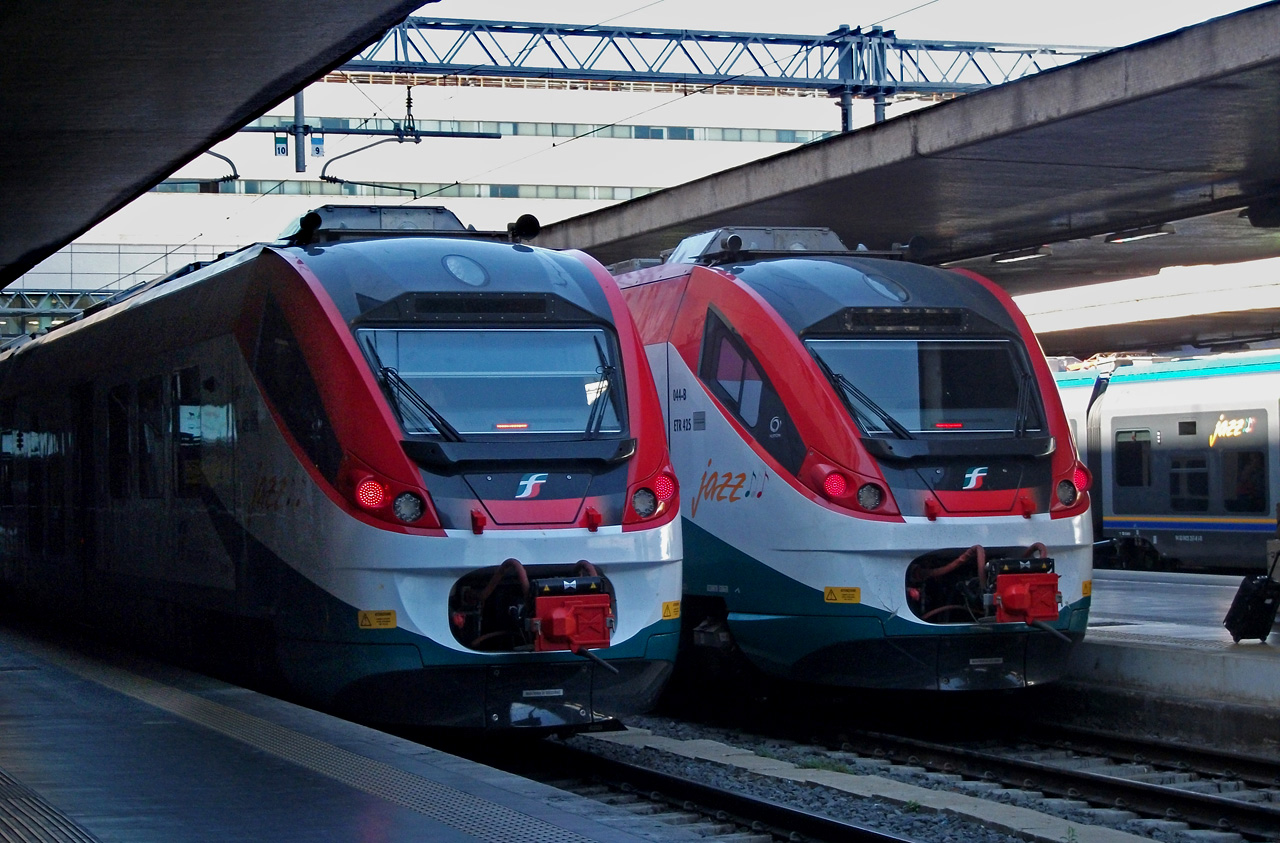 Having been shouted at almost immediately as I pointed my small compact
camera at a train further down the platform here at Rome-Termini this
shot was grabbed from behind a piller out of that officials overkeen sight!
They are a pair of ETR-425's or 'Jazz' as they are known.They operate out
to Leonardo de Vinci Airport from here in Rome-Italy and are known as
'Leonardo Expresses'.A similar operation to 'Gatwick Express' in the UK. 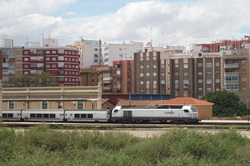 I have just returned from a relaxing week in the sun in Southern-Spain.The only railway orientated picture all week was this grab shot at Cartagena Station of a RENFE-Class 334 Bo-Bo.Built just after the UK Class-67's by the same manufacturer-Vossloh. It bears a strong resemblance to these and with only 28 built just as unique.Pictured from a patch of waste ground which was the only convenient place to stop after having glimpsed it.All rather scary as a spanish-tramp was dossing nearby amongst a pile of wood and old canvas and started shouting at me as I passed him!!!! 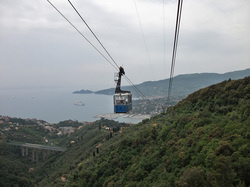 This is a very high cable-car system climbing high above the Italian City of Rapallo.In the Mediterranean Bay below can be seen our Cruise Ship-'Thompson Dream'.
Only two cars on this cableway so frequency was quite slow,about 3 times an hour each way! 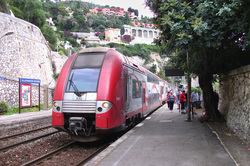 This is an SNCF 'Regional' double-deck EMU No 440.Seen at Villefranche Sur Mer going to Grasse having just brought me back from a day trip to Monaco along the Cote A'azure (French Riviera).It was rather strange watching the roofs of the passing trains from my seating up on the top deck. I think Bullied had the right idea on the Southern with this type of train.Pity about the UK loading-gauge! 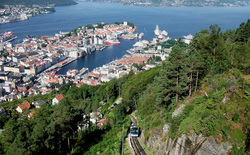 The final port of call during my Cruise to Norway was the countrys second largest City--Bergan..A view of some of that City is available if you travel to the top of the surrounding mountains using the 'Floibanen' Funicular Railway.This very steep line uses stepped single unit passenger-cars with glass roofs so you can appreciate the view whilst travelling on it up or down..Here the 'Blue' unit can be seen creeping slowly towards the summit whilst the City is spread out below.
A big bonus here today? The sun was shining.Apparantly Bergan suffered a recent damp spell with 83 days of consecutive rainfall! 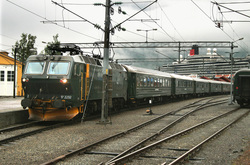 A fully loaded Flamsbana 6-coach train top-n tailed by a pair of EI-17 Electric Locomotives prepares to leave Flam in Norway for the railway-junction up at Myrad.I was unable to obtain tickets for a trip on this line due to all bookings being swamped by the hoards of passengers (Up to 2000) that disgorged from the massive Cruise Liner 'Queen Victoria' that docked just before our ship.The QV weighs in at 90000 tons whilst our 'little' ship was a mere 32000...It can be seen towering over the Station in the background. 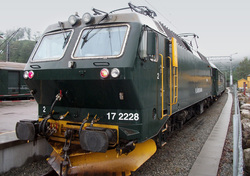 You will not see one of these going through Bath-Spa,even after the line is electrified in a few years time! This is a B0-B0 Class EI-17 number 17 2228 built in 1998 for use on the Flamsbana-Flam to Myrad Railway.All passenger trains comprise of 6 coaches top-n-tailed by a pair of these locomotives.
Here this loco is seen standing at Flam Station which is situated right next to the end of the Aurlandfjord.The Country is of coarse Norway. 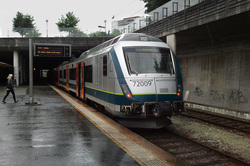 And now for something completely different! Here is an AnsoldoBreda Class-72 EMU 72009 running on the Norwegian State Railway (NSB) about to depart Stavanger with the 10:31 service to Naerbo.These Units, (76 in Class) work off of 15kV OHLE and  operate as 4-car's or muliple thereoff.A sort of Norwegian Voyager! A very typical scene from Norway complete with the usual rain! 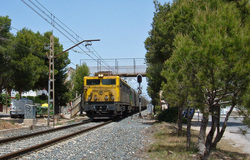 Having rode over a 1000 miles from Frome in Somerset to get here near Tarragonna in Spain I decided to picture a couple of RENFE trains on the line going west from Barcelona whilst my bikers-buddies were sunbathing a couple of hundred yards away on the mediterranean beaches.The loco is a RENFE-Electric Bo-Bo 269-077-4 (3000 volts) built in Japan by Mitsubishi hauling what appears to be a steel train. 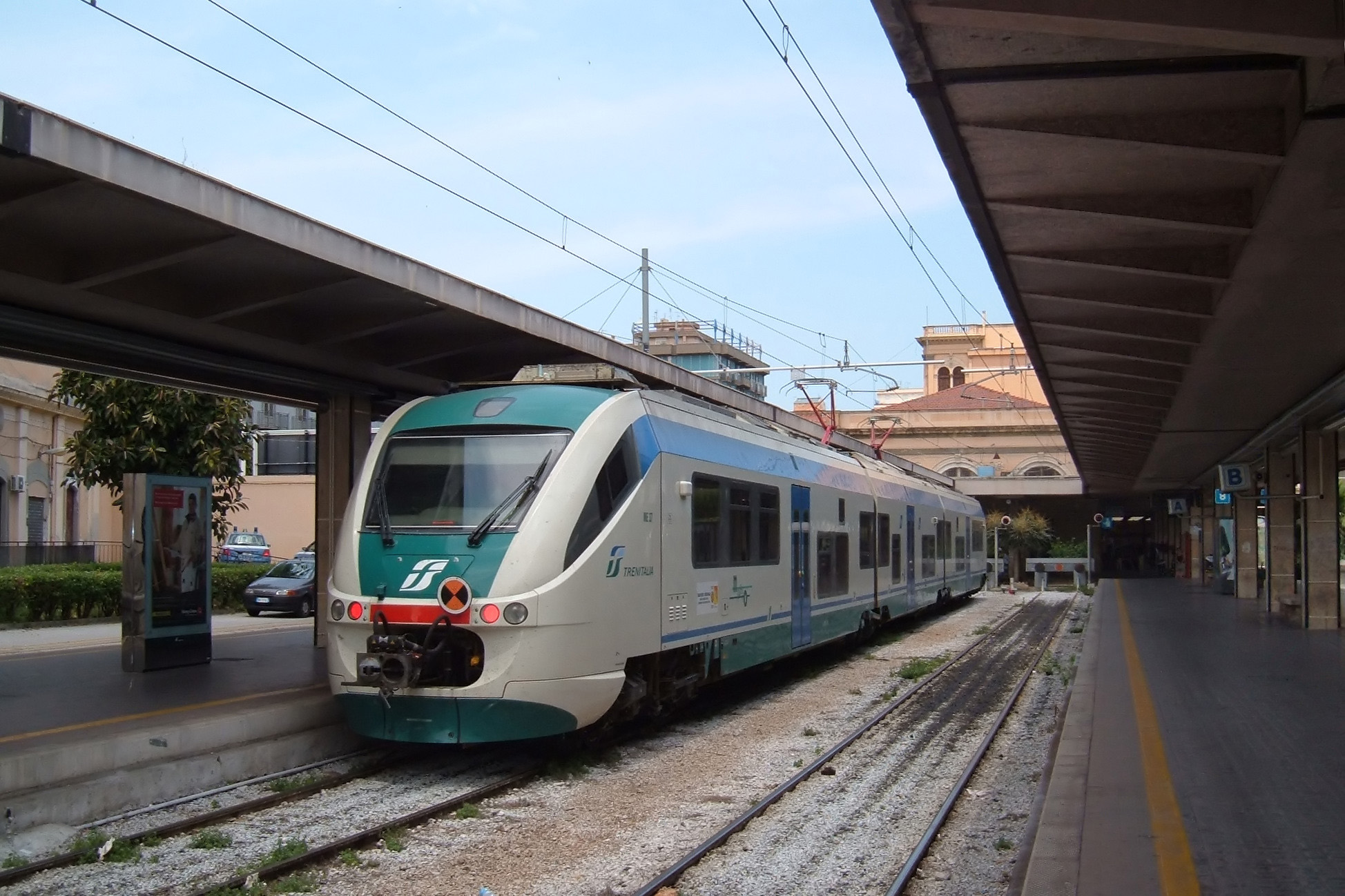 A 3-car EMU stands in Palermo on the Italian island of Sicily having just
just arrived on an incoming service. 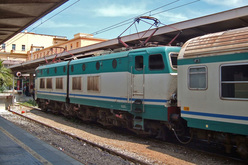 I wandered into Palermo Railway Station whilst on a Med-Cruise and saw
this odd looking locomotive.It is a Bo'Bo'Bo articulated 3000V DC machine
that had just arrived on a passenger service. Number was 656-060 (1st
series) and are apparantly quite a common traction-unit here is Sicily and
on the mainland of Italy as well.