A Class of 69 examples originally built in 1961...Lasting until 1987 on the mainline.Eight survive in preservation. 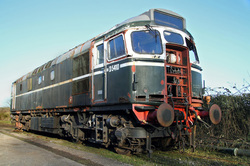 After watching this loco D5410/27059 being unloaded yesterday in the Bitumen Sidings at Cranmore on the East Somerset Rly I was informed it would not be moved into the Carriage Shed there for commencement of
bodywork repair and repaint for a couple of days.So after checking 'The Photographers Ephemeris' (Click ​HERE ) I was able to determine that very late in the afternoon the sun would be on the 'yard' side for a reasonable portrait.Hence a short revisit for this late afternoon shot. 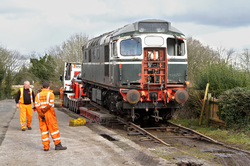 This shot was taken as 27059/D5410 was actually rolling slowly off the lorry-trailer that had brought it all the way from Barrow Hill to here at Cranmore.
The 'Moveright International' crew of three had this operation down to a fine art with no conversation whatsoever.They just got on and did it,having probably done this type of job many many times before! 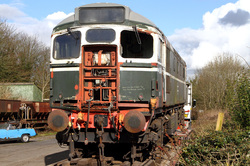 D5410/27059 sits, still on the trailer that brought it here from Barrow Hill to Cranmore in the old Bitumen Sidings there.Preparations were going on to unload it.The lorry tractor-unit having gone round to the back-end of the trailer so that it could slowly roll it off onto the tracks under the control of a power-winch and cable.A brief splash of sun allowed this colourful shot.
Note the 1969 MG-Midget alongside.That was in almost as bad a condition as the Class-27.Looking pretty much abandoned with grass growing in the footwells and seats! A pity. 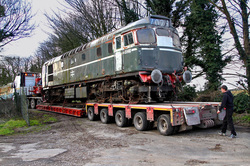 Whilst returning home from S-Wales I caught this locomotive D5410/27059 up on the A36 at Beckington being transported from Barrow Hill to Cranmore where the bodywork is to be repaired and repainted.Here it is entering the old Bitumen Sidings Yard where it will be unloaded by the very efficient crew of 3 workers that travelled down with it.Note the walker at the rear operating a remote control for the rear-wheel steering on this large trailer.Without that it would never had got round the corner and into the yard!. 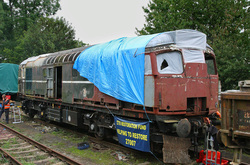 27007 stands in the sidings at Medstead and Four Marks looking rather worst for wear.The person making a mobile phone call was probably asking for help! 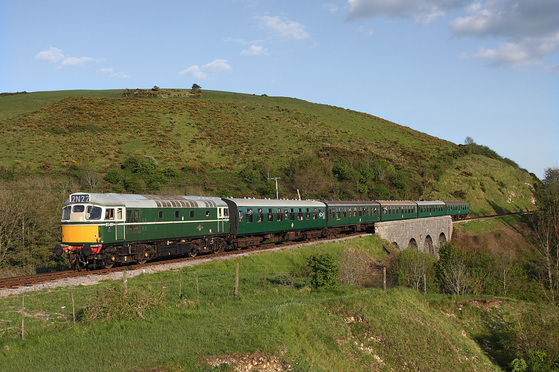 Having pictured all of the Gals's working fleet of engines from the high vantage point of Corfe-castle itself it was time to move down to the Foot-Crossing area on Norden-Common for the last couple of workings.Here is Sulzer D5401 crossing the short viaduct at Corfe heading for Norden.The green of this loco showing up superbly in the low evening light. 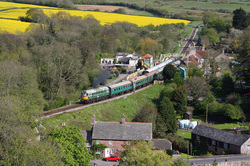 Sulzer D5401 growls away from Corfe-Castle.33111 was also departing towards Swanage. 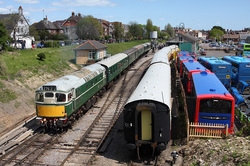 D5401 eases away from Swanage heading for Norden.Note the Carpark being used as a makeshift Bus-Depot.The evening dining-train stands ready for Food&Beer trains after the main timetable ends around teatime. 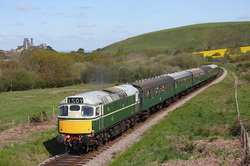 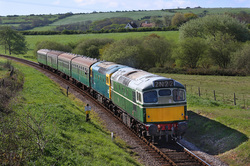 First train of the day and also a rare double-header given the circumstances that this Gala found it had to operate under after the infamous 'Convoy' failure earlier in the week.D5401 and 33111 amble across Corfe-Common heading for Norden kicking off todays  (Saturday) proceedings. 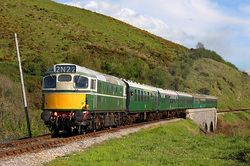 D5401 passes the small viaduct over the B3351 road shortly after departing Corfe-Castle heading for the current end of the passenger-line at Norden. 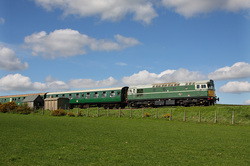 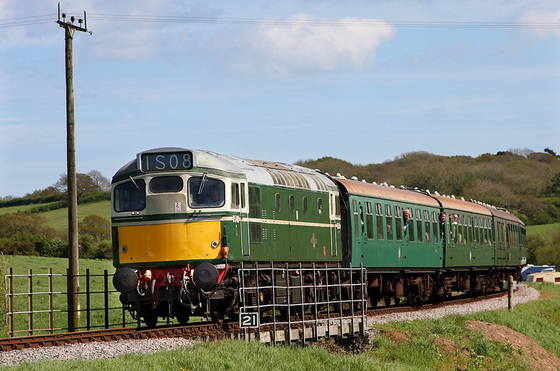