Amazing the quality considering.Ok in an Emergency for that 'must have shot' as long as it is not moving,in which case Forget it!
All these pictures were E-mailed from the Phone to a Laptop so no Card-Readers or Cables involved! 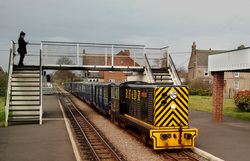 With passenger numbers being very low on a cold mid April day the RH&DRly understandably uses the B0-B0 Diesel No-12 'John Southland' for the final train of the day from Hythe back to New-Romney.Here is the 16:00 off that end of the line slowing for the Dymchurch stop.A quick count of the passenger numbers as it departed revealed a grand total of just ONE.Shades of BR Branch Lines in the early 60's me-thinks!
(Brought to you by Samsung Mobile Camera and Email) 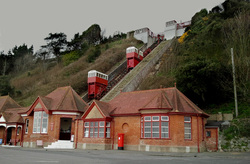 Today I visited Folkestone.Whilst there I had a look at the sad remains of the now derelict Harbour Station that was closed in 2008.
Click HERE to see that.
Whilst in the area an opportunity was taken to picture the 'Leas Lift' Cliff Railway.Opened in 1890 this water powered Funicular is the only survivor of four such railways in Folkstone.I understand one of the others is being restored as well. 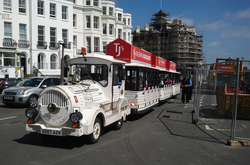 This piece of Italian exotica 'Dotto Castel-Franco Veneto' is Eastbourne's answer to public transport needs in the shape of a Road-Train.Two were actually in use and seemed very well filled with punters.Another Mickey-Mouse Samsung Galaxy Smartphone effort! 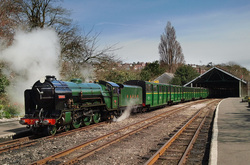 The dreaded mobile phone camera strikes again! I just can't be bothered carrying a heavy EOS and Lens around when out with the family.
Here is 'Typhoon' a superb 4-6-2 miniature replica of a Gresley Pacific with A1 type deflectors added.It was constructed in 1927 a mere 86 years ago.It has to be said it looked positively immaculate in its current dark green livery.Here it is seen at Hyde station about to depart with the 14:30 to Dungeness. 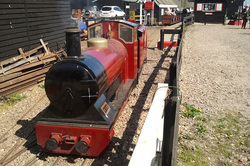 This curious little 0-4-0 diesel-mechanical steam outline locomotive  is seen running round its set of toastrack passenger carriages at the eastern terminus of the Hastings Miniature Railway.This 10 1/4'' gauge line was opened in 1948 and runs along the seafront at this coastal town.
Another shot that tells you why 'Jessops' went into administration and 'Samsung' is now a world leading mobile phone company! 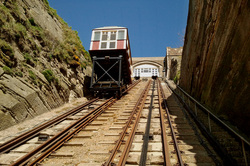 This is the East Cliff Funicular Railway in Hastings.Reopened again after an accident in 2007.A major refurbishment took place and it was back in service in 2010.Today in 2013 it is the steepest funicular railway still in operation in the whole of the United-Kingdom.Yet another shot taken with my very tempremental/slow Samsung Galaxy S 'not so' easy to use  mobile phone camera! 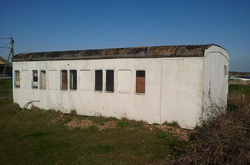 Another Samsung Galaxy S mobile phone picture.....This old wooden coach body was probably originally a 6-wheeler from perhaps the SE&C Rly.It was being or is being used as a holiday home at Rye Harbour.Not sure what the future holds for this possibly 100 year old relic but structurally it was in fairly good condition! 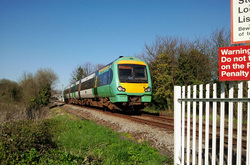 Southern Railways 171723 gets away from Rye in East-Sussex with '1G50' from Ashford going to Brighton.The lighting for this shot was just about perfect and a good job too.I actually used a Samsung Galaxy S mobile phone for this picture and e-mailed it to my laptop...Amazing what you can do these days with modern technology!!!!