Long gone from the National Network.Some in use in Preservation. 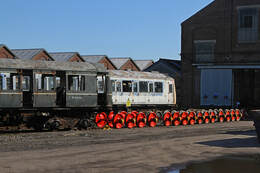 Here is a glimpse of part of the yard in Eastleigh Works through the palisade fencing there.A couple of long withdrawn and nominally preserved Class-117 DMU's that are now effectively scrap having been used for parts donation for the Class-117 3-car being rebuilt here for use on the Swanage Railway into the mainline station at Wareham.One is an ex-NSE unit whilst the other is W51346 which originally was going to be rebuilt until fellow unit W51356 was found to be a better rebuild proposition.Their future is use as spare-parts then scrapping. 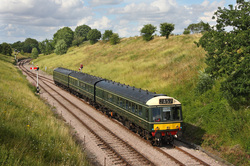 Class-117 W51363/W59515 and W51405 drives away from Toddington with '2L71' heading for Laverton departing at 16:30 from there.This was actually a going-away shot but as the clouds were building up was taken as security just in case the return working was lost to the clouds.Of course it they did! so this version was used instead! 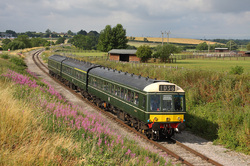 This rather nice Class 117 3-car DMU which comprises of W51405/W59515 (really W59510) and W51363 passes Southam shortly after departure from Cheltenham Race Course with '2L52' the 09:30 going to Laverton.This unit has certainly proved its worth on this railway particularly during the difficult period when the line was split in half by the landslip near Winchcombe handling the services to Laverton on a regular basis. 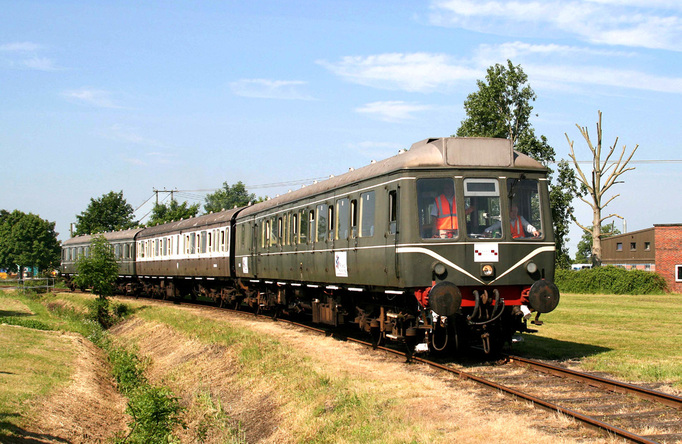 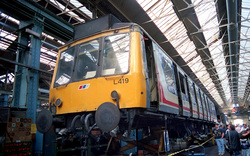 51356 from Set-L419 sits up of jacks bogie-less with all its doors removed receiving a quite thorough overhaul here at Eastleigh Works.By now it was wearing NSE-colours.How long it remained in service afterwards is unclear.However all Class-117's were OOS by 2000 just eight years later so this was almost certainly its final 'works' visit.