Several concerns on the National-Network use these Trailers as a means of having all the advantages of DMU/HST type operation whilst still retaining the flexibility of a seperate locomotive.Also Barrier Carriages used for stock movement 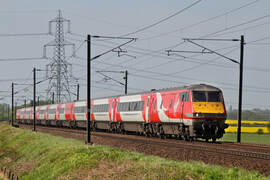 I find it quite hard to believe that these modern Mk-4 Sets c/w the Class-91's and custom built DVT's are set for replacement by IEP train-sets similar to those currently now being deployed on the GWR.
After the luxury of a quiet and comfortable UK built Mk-4 carriage the poor old customers are going to get quite a shock when the Jap-Rollerskates start turning up instead!  So here is a view of the soon to be 'the past' DVT 82226 leads '1S26' the 12:00 from Edinburgh to London Kings Cross with 91128 supplying the traction at the rear.
Pictured speeding southwards at Claypole nr Newark North Gate. 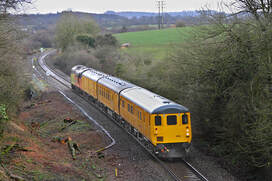 DVT-9703 leads this short Test-Train '3Q14' the 10:28 from Westbury Up-TC to Westbury Up-TC via Weymouth and Thingley-Junction up the single line from Blatchbridge -Junction to Frome Station.Colas operated 37099 was providing the power pushing for all its worth.Note how clear this little seen location is now after the local 'Ground Control' team had done its work! 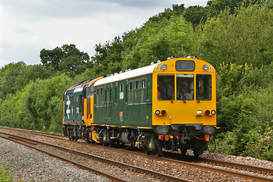 Today an Inspection-Saloon 'Jolly' ran from Willesden-Brent Sdg's (06:45 off) to Exeter-St-Davids then the Dawlish Sea-Wall section and back as '2Z02'..The return leg being via the B&H.Here we see the well known 'Caroline' which started life originally as part of Hastings gauge Class 203 No-1036..Now numbered 975025 it was once S60755.Amazingly it has already been claimed for the National Collection when its working days are at an end.The loco doing the powering is 37403 which is a miracle restoration from a complete wreck at the Bo'ness & Kinneill in Scotland over a period of about 10 years or so from a complete heap dragged out of Margam Yard.Viewed passing Fairwood. 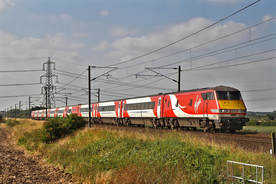 DVT 82202 speeds southwards with '1E17' the 13:30 from Edinburgh to Kings Cross.Power being provided at the rear by 91101 'Flying Scotsman'.Seen at Claypole south of Newark.Annoyingly that particular '91' was one of the targets for the day but I failed to even get a GAW type shot. Oh-Well ????? 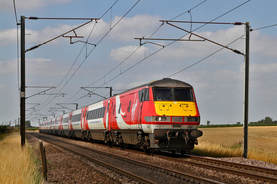 DVT 82212 leads '1E14' the 12:00 from Edinburgh to Kings Cross with 91130 doing the work on the rear.It was a long wait but by now (15:27) the skies had finally cleared to produce a superbly clear afternoon and evening.This working is seen passing Frinkley Lane north of Grantham. 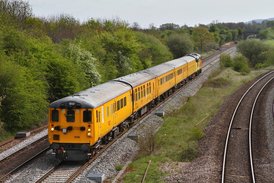 Today a Test-Train operated from Westbury to Westbury via Weymouth and Thingley-Junction.Running as '3Q14' it departed Westbury pretty much on time.Sadly for this first leg to Weymouth  DBSO-9708 was leading instead of the hoped for Colas-37099 which was happily pushing for all its worth on the back.Pictured here approaching Fairwood-Junction going westwards. 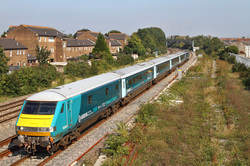 With every available Class-175 in use Arriva-TW even pressed the Loco-hauled set into service with '1V74' the 08:00 from Holyhead to Cardiff-Central.Perhaps we need a big Rugby match on at the MIllenium Statuim every weekend! Here is DVT 82307 leading with 67001 somewhere on the rear producing the motive power.Long Dyke Junction is the location again.Note the overgrown almost invisible track that was the reason for the title 'Junction' until a couple of years ago when it was disconnected. 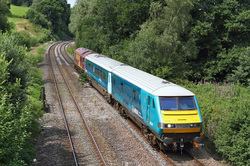 This is a Cardiff to Cardiff via Abergavenny (reverse) crew training run working as '5C52' with a 12:15 departure. EWS-67016 was providing the power whilst ATW-DVT 82306 was leading. Viewed passing Ponthir on the return leg of its short training run. 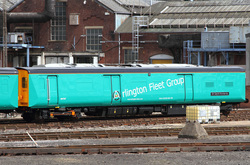 This is a Barrier-Vehicle held at Eastleigh Works and currently owned by
'Arlington Fleet Group'.Originally it formed part of EMU 508207 but now operates under its coaching number 64707.Note the cast nameplate 'Sir David Rowlands'. 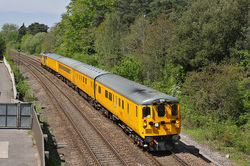 Network-Rail Test Train '3Z01' from Exeter returning to Derby passes Coalpit Heath in the nice spring light.31285 was proving the pushing power whilst the driver etc were sitting in silence in DBSO-9708 up front.
Plenty of camera's/lights and other pieces of recording equipment were fitted to 9708 to break up the rather bland look of this unit. 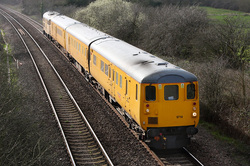 '1Q14' having gone to Weymouth then reversed and headed for Didcot with 31105 now pushing for all its worth.The driver was sitting in silence up front in DVT-9714.The train is seen again at Fairwood 5 hours after it was viewed with 31105 leading going the other way this morning. 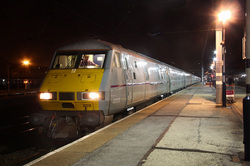 '1E21' from Edinburgh (15:30 off) sits in Doncaster ready to continue on its way to Kings-Cross having now lost its drag-locomotive 67005 that brought the train from York via Milford-Junction and Knottingley.
82203 was the leading DVT, The '91' pusher was not noted as it was now nearly 20:00 in the evening and I had been on my feet stood around for nearly 12 hours with a 200 mile+ journey ahead of me to get home.Quite frankly by now I couldn't give a toss! 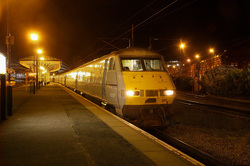 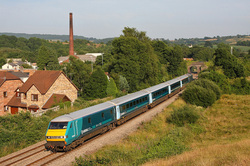 The 18:21 from Cardiff-Central to Holyhead '1W94' runs almost silently up past Ponthir north of Newport with DVT-82306 leading and 67002 pushing for all its worth. 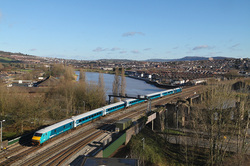 The main reason for visiting Newport was to picture this .The '1V41' LCHS substitute for the regular Class-175 DMU from Holyhead to Cardiff-Central. Extra seating capacity being required due to a 'Six Nations' rugby game between Wales and Ireland in Cardiff. DVT 82306 was leading a nicely turned out Mk-3 coaching set with 67002 pushing at the rear.
Oh yes, the home team were well beaten.Ireland won 30-22! 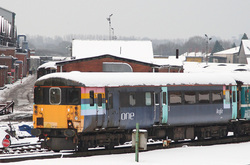 Seen in the snowy yard of Eastleigh Works is DBSO 9710 still wearing the livery of its last operator 'One' before it went off lease.The workings out of Liverpool Street to Norwich now being exclusively DVT's.In all probability it will become part of the yellow 'Network-Rail' allocation if and when it is refurbished. 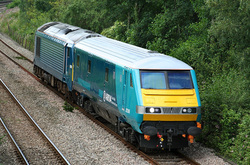 Typically when this appeared a nice big black cloud was busy mugging the sun!.No-matter. Here is the Crew-trainer '5Z54' from Holyhead all the way to Cardiff (Canton) preparing the ATW crews for the upcoming DVT equipped service between Cardiff and Holyhead.Fully liveried and refurbished DVT 82308 is seen being pushed by dedicated and similarly liveried 67001 down through Ponthir just north of Newport.It is believed that these Driving-Vans will be brought into service sometime in September-2012. 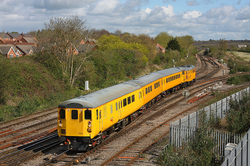 DBSO-9701 leads '1Q14' into Westbury after running down from Derby from where it had departed at 05:57,five and a half hours earlier.Its destination (eventually) is Eastleigh after a journey via Basingstoke,Southampton and Weymouth.Veteran Type-2 31465 can be seen back-scuttling the formation on the approach to the Westbury-Station. 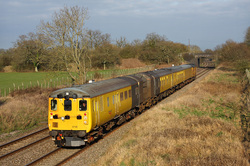 The 'Structure Gauging Train' made a rare appearance today in daylight! Here is '1Q06' from Hither-Green going to Landore in West-Wales.Unfortunately the formation was led today by DBSO-9708 and the power behind it all 31285 was at the rear pushing for all its worth doing a passable impression of a Coach! Location was Acton-Turville nr Badminton. 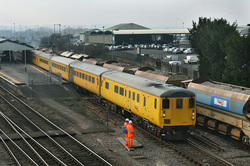 DBSO 9701 is seen being pushed away from Westbury on the Westbury to Bath-down goods loop section of todays '1Q13' test scedule for this radio survey test train.37604 was the power for this duty today. 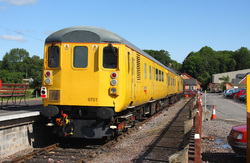 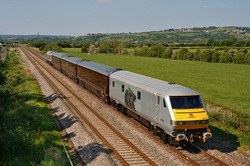 This is my only picture of the EWS-Executive-Train.It has now (in 2013) been rebranded as DBS.Here it is with DVT 82146 leading its three Mk-3 coaches including a sleeper-car with 67029 pushing at the rear.It was running as '5Z05' from Toton going as far as Exeter-Riverside for an overnight stop.The location is Lympsham south of Weston-super-Mare. 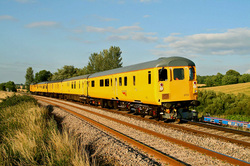 Serco Test-Train '4Z08' from Didcot to Taunton passes Crofton on the B&H with 31233 pushing and DBSO 9703 leading.The recently introduced refurbished 9703 DBSO allowing the use of just one locomotive on these trains that by their very nature can and do reverse several times during a days tour.Thus making a considerable cost saving.Network-Rail being the latest user of these Driving Trailers that have seen service in Scotland on the Edinburgh-Glasgow push-pull circuit(diesel) and from Norwich to London-Liverpool-St in East Anglia(electric).