These Units were constructed in 1995/6 for the Post-Office to work with RES for parcel delivery.However in 2003 a petty squabble between the PO and EWS resulted in the loss of all mail by rail for some time.These units after a few years in storage restarted work albeit on a more limited scale than before.16 4-car units were built at ABB-Derby.one damaged one now broken up for spares. 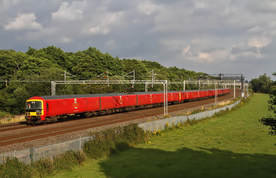 Here is a train of 3 sets of 4-car '325' postal-units forming the regular '1S96' Royal Mail Train from Willesden-PrDc up to Shieldmuir Mail Terminal.The lead unit being 325016,the other two being sadly unidentified.Currently these trains are operated by DB-Cargo.I suppose those units can be seen as the remnants of the once countrywide  RES operation that ceased operations in 2003. Location for this view is Mill Meece on the WCML north of Norton Bridge. 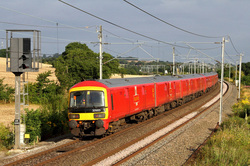 Here is one of the sole surviving mail services that still uses the rail network. Royal Mail owned 325003 is seen bringing up the rear of '1F00' the 06:40 service from Willesden-PRDC going to Warrington-RM.Viewed speeding northwards through Blisworth. 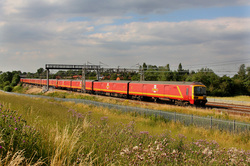 Despite RES and the Post-Office suffering a painful divorce over the 'Mail by Rail' contracts some mail still travels up the WCML each evening.Here are three dedicated Post-Office owned Units with 325014 on the rear heading north on '1S96' through Stoke Hammond going north from Willesdon to Shieldmuir.All the people involved in the loss of rail borne mail and parcels after all the then recent investment deserve a good and thorough kicking!