These EMU's are  a member of the Electrostar-Family built by Bombardier at Derby Litchurch Lane Works.
In service with Gatwick Express/GWR/c2c & Great Northern. 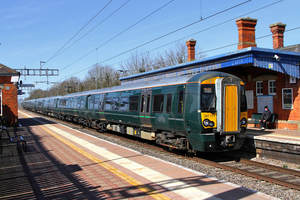 These Class-387 'Electrostars' are now firmly in charge of the services between Didcot-Parkway and Paddington.Altogether 45 of these Units are, or will be in service with GWR.Due to the electrfication between Didcot and Oxford being currently suspended the fleet probably exceeds the current requirement!  Here is 387171 gliding silently into Cholsey with an 8-car local service '2P55' the 14:33 from Didcot-Parkway going up to Paddington.Apparantly passenger experience so far with these units is quite favourable compared with the older 165/166 diesel Turbo's they have replaced! 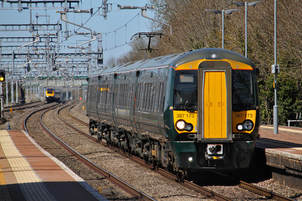 This is the new order these days for local stopping services in the Thames Valley.GWR 387173 is viewed drawing to a stop at Cholsey with '2P50' the 13:32 from Didcot-Parkway going to Paddington.All very quiet and shiny just like the new OHLE.However I wonder what it will look like in 10 years time! Probably somewhat scruffier and wearing yet another misguided livery no doubt? 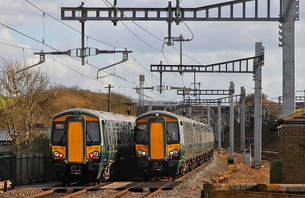 387155 with '2P52' gets away from Cholsey as 387139 '2N36' arrives with the 12:57 from Paddington to Didcot-Parkway.
Note the overhead catenary wire is supported by what looks like coat-hangers capable of supporting perhaps 30 kilograms max whilst the masts that support those coat hangers look massive enough to lift out a power-unit from an HST-Power Car.The hangers look quite elegant but the masts most certainly do not! 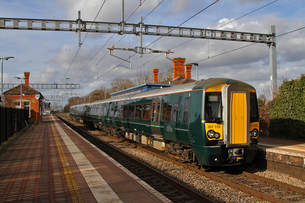 387155 stands in Cholsey with '2P52' the 14:03 from Didcot-Parkway to Paddington.There are (or will be) 45 of these 4-car EMU's in service eventually mainly replacing Class165/166 Thames Turbo's which are now being cascaded westwards to work out of Bristol etc. 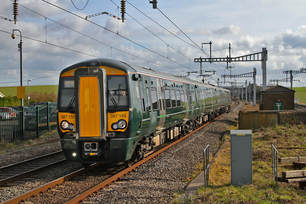 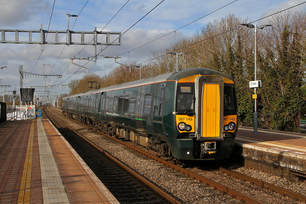 Brand new to this stretch of line,introduced just a month or so ago are these Class-387 EMU's that now work from Paddington to Didcot on a regular 30m shuttle basis.The significance is that this is my first sighting ever of something actually operating on the new GWR-Electrification scheme. So here is 387143 running into Cholsey '2P50' with the 13:32 from Didcot-Parkway going 'ALL' the way to Paddington under electrical power.Well I suppose it had to happen eventually!