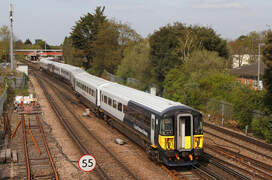 Here is yet another Class-442 test working.With 442408 leading and 442411 on the back '5Q31' ladders over at St Deny's in Southampton going from Bournemouth T&R.S.M.D (14:09 off) to Fratton C.S.D.10 Mk-3 coaches in all,certainly more appealing than the Class 444's which are currently extreemly filthy.Have SWR given up cleaning their stock or are all the carriage cleaning facilities defective?????   I wonder. 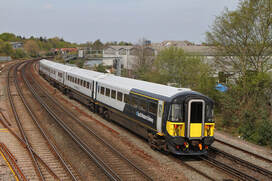 Ex-Wessex Electric 442404 with '5Q93' returns to Bournemouth T&R.S.M.D from Eastleigh Works (ZG) 14:20 off having delivered 442423 there for some maintenence.Here seen passing Mount Pleasant in Southampton. 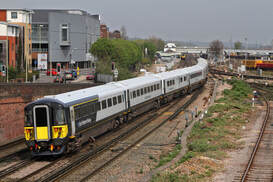 The Class-442 testing/training continues apace along the south coast .Here are 442404 with 442423 laddering over in readiness to enter Eastleigh Works-Arlington(ZG) with the 11:12 from Bournemouth T&R.S.S.M.D as '5Q92'.I am not too impressed with this very 'budget' livery.Whatever was wrong with the old I/C or NSE schemes ????? Still at least these Mk-3 based EMU's are now about to re-enter service after a long long layoff! 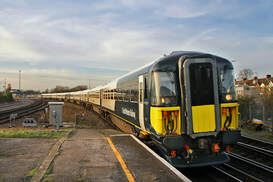 Here is a refurbished pair of Class-442's out on crew training passing through Millbrook nr Southampton heading east. This train comprises 442413/442410 and is working '5Q31' from Bournemouth T&R.S.M.D to Fratton CSD.It is wearing the 'budget' painted version of the newish South Western Railway's Franchise identity.Vinyl's were obviously too expensive for this cash strapped TOC. 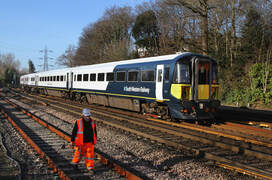 Class 442's are now out and about doing crew training runs along the South Coast.This pair,freshly overhauled and reliveried 442413/442410 are seen heading west at Southampton with '5Q30' the 10:25 from Fratton-CSD going down to Bournemouth T&R.S.M.D.The greatly simplified (cheapened) new 'South Western Railway' livery being well in evidence in the low morning sunlight here at Southampton-Central.