The Seaton Tramway is a 2 ft 9 in (838 mm) narrow gauge electric tramway which operates over part of the route of a former London & South Western Railway to Seaton, Devon. The line was converted between 1969 and 1971 by Claude Lane, who had bought the line from British Rail and had successfully operated trams in Eastbourne as a visitor attraction.
The 3-mile (4.8 km) route runs through East Devon's Axe Valley,between the coastal resort of Seaton (Seaton Tram Station) and the small village of Colyford and the ancient town of Colyton.Thirteen tram cars are part of the visitor attraction which sees about 80,000 visitors per year. The tram cars are half-scale (1:2) replicas of classic British tram cars from various cities; some were rebuilt from full-size cars which originally ran on other networks. Number 19 is the only tram from the Exeter tram system which is still in service. 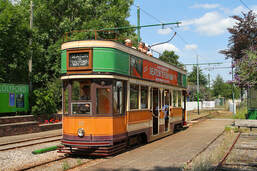 Seaton Tramways No-10 gets away from Colyford with the 12:50 from Colyton going to Seaton.A superb little station with no H&S signage and barriers anywhere unlike the brand new Terminus only opened last month in Seaton which in some ways resembles a bus station! 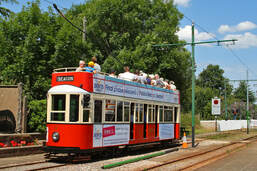 Seaton Tramways Tram No-12 slows for the level-crossing here at Colyford with the 12:40 from Seaton to Colyton.The driver manually operates the warning signals and bells and after crossing stops again to cancel them.All very simple and effective! 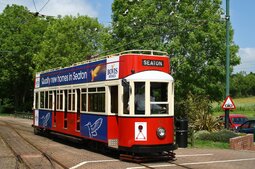 Tram No-12 rolls into Colyton Station in readiness to form the 13:!0 service to Seaton.This particular tram was built in Eastbourne in 1966. 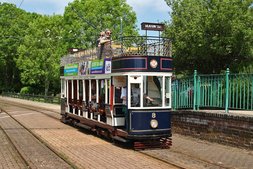 Wearing the colours of the old Bristol Tramways-blue & cream Number-8 moves off from Colyton going to Seaton as the 12:50 departure. 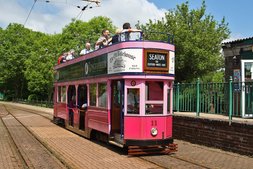 Tram No-11 in its 'pink' Cancer-Care livery that was applied in 2011 to this 2007 tram gets away from the northern terminus of the tramway here at Colyton with another well loaded service departing at 12:30. 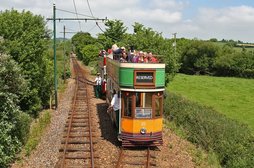 Here is a busy passing-loop on the Seaton Tramway.A very full Tram No-10
along with another service right behind wait to allow our working to pass. No-10 was built in 2002-2007 at Bolton and finished off at Seaton.This hybrid being based on elements of the old Plymouth and Blackburn trams. 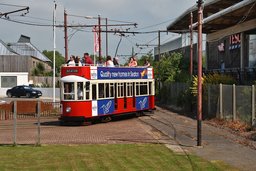 Tram No-12 rolls into the terminus at Seaton-Harbour Road with the 11:10 from Colyton on the 2'-9''gauge Seaton Tramway.This vehicle was built in Eastbourne in 1966 as a single decker but was rebuilt as a double-decker in 1980 to resemble a London-FelthamTram c/w its livery.