Aside from a life-long interest in all things railway my other Hobbies include Motorcycle Touring across Europe for the last 17 years and restoring old bikes.Below will include Bikes restored over the last four decades (Some now sadly sold) and places I have visited on the Continent and in the UK whilst riding them. 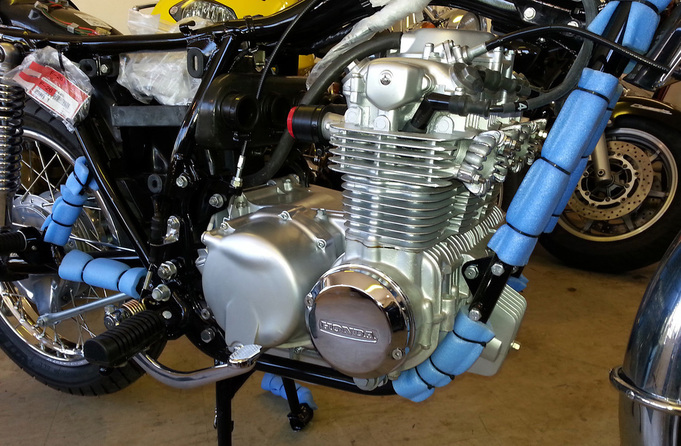 Early days yet but this will eventually become a fully restored Concours Condition 1977 Honda CB550-K3.Engine is now fully overhauled and reconditioned as is the majority of the cycle parts.All remaining major components such as exhaust system,tank seat and side panels are awaiting fitment. This machine has the potential to be the best one yet in the collection------watch this space! 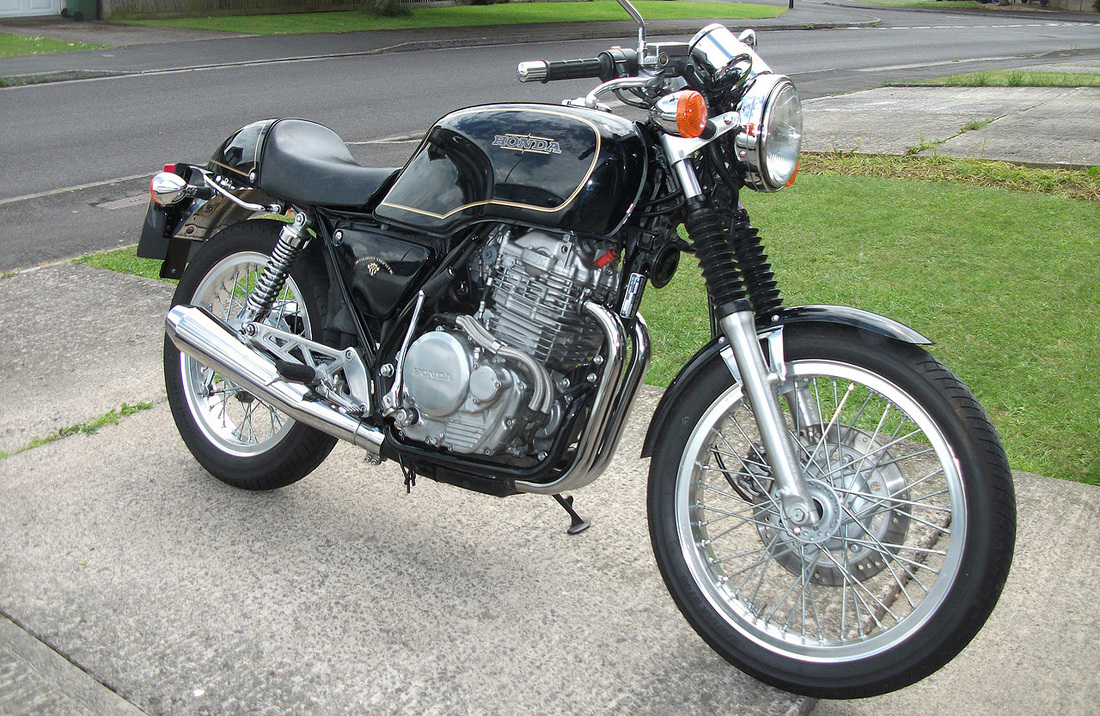 Here is my 25 year old original condition Honda GB500TT-Single shortly after it has been thoroughly cleaned up after covering 800 miles last week across France in somewhat moist/muddy conditions.It certainly makes a change from hanging around on bridges!--------18 june 2016------ 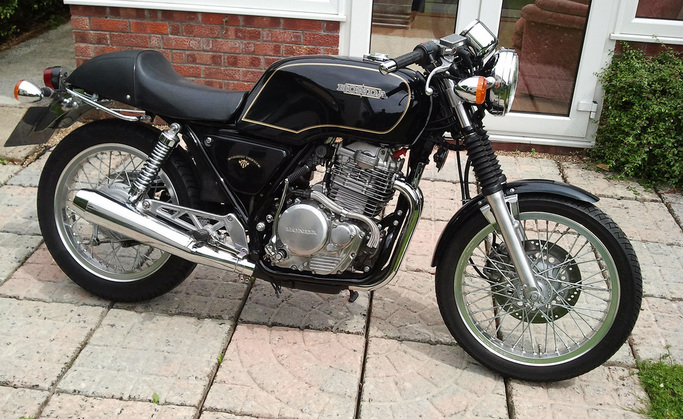 Here is one of my latest acquisitions.It is a Classic that Honda produced for just 2 years from 1989 to 1990 and sold mainly in the USA/Australia and Japan.Less than 5000 were built for the entire World. It was never officially imported into the UK.This particular bike originally went to the USA but remained unsold so was re-exported from there to Germany.A lifetime friend bought it on E-bay 10 years ago and flew to Munich in Southern-Germany to collect it and rode it 800 miles home to the UK.So apart from those miles coming to England it has only done about another 400 miles since then (2003). Now fully MOT'd and insured it is about to undertake a week long trip to the Isle of Man early in July.I expect to do about 1000 miles in that week.Preliminary short trips around the roads locally indicate it is in fine shape mechanically and should prove a really interesting ride!   Happily to trip to the IoM went without a hitch.8 days of superb hot dry sunny weather made it a week to remember.......It is now back in the garage covered up looking polished and pristine once again!
In June 2016 it was revived again,this time for a 800 mile tour of Northern-France.Braving the Fuel Strikes and the Le-Harve Port blockades.All went well although our ferry-port home was changed to Caen from Le-havre due to French Industrial action!
Click HERE for another angle 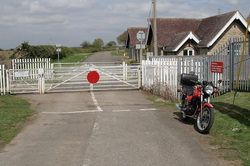 Here is my Honda 250RSA parked up at Mill Lane Crossing at Islip north of Oxford.Plan'A' was to ride the Suzuki 600 but the thing had a sulk and refused to start so this Plan'B' was pressed into service instead.A round trip of 180 miles for a shot of 56303 here on the flyash (Click HERE to see it).I have to say my backside was a little stiff by the time I got back home! 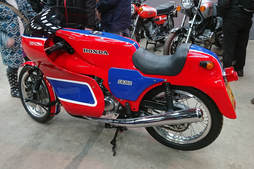 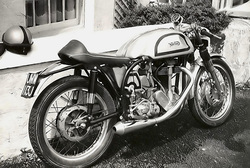 Here is one of my earlier specials I built way back in 1971.Bits such as used on this bike are now ridiculously expensive and some almost unobtainable now.It was a 1954 'bolt-up' wideline featherbed Norton from an early Dominator-88 (A J122 prefix) using a post-war 350 International engine with the top-end off a 'bronze-skull' Manx 30M.Genuine Manx-tanks,Commando wheels and brakes.I cut the duralium engine plates out by hand from cardboard templates and built it over about 5 months.I registered it in Trowbridge-Wilts over the counter (No DVLA in those days)....Bike pictured at Ballaugh Bridge in the IOM whilst I was there for the 1972 TT.No luxuries in those days such as lights,centre-stands and kickstarts!
Not much money either! 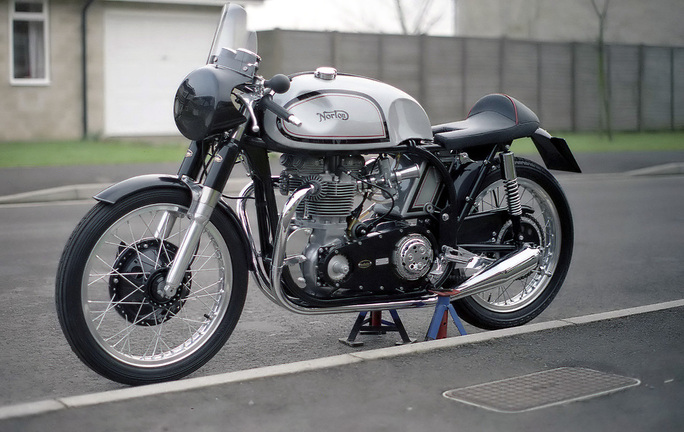 Ahhhhhhhhhhh  My Triton I built back in the 1980's.A masterpiece in steel and alloy.Frame was a rare 1956 'manx' radius loop version with the 'manx' type swingarm.Engine was converted to an 'all alloy' 750cc and was brim full of the top racing bits & pieces.Superblend bearings,polished conrods and balanced lightened one piece crankshaft,the best cams and followers,lightened 3 keyway timing wheels and a fully worked on valve-train plus a gas-flowed head with race spec concentric carbs.Everything was top drawer,modified or brand new. I won the 'Festival of a 1000 Bikes' Best Special Award and Top post-war Classic Special at the Bristol Bike Show twice as well! It also warranted an 8-page feature plus the Front Cover of a National Classic Bike Magazine. Where is it now? Recently it has re-surfaced on the DVLA data-base but is currently on SORN and not in use on the roads.
..1988.. 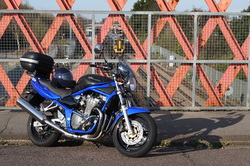 Ahhhhhhhhh !   This is what retirement is all about! Riding around in the warm sunshine stopping off now and then to do a few fresh pictures of passing railway workings.Had this bike (Suzuki gsf600f-k4) now for 7 years and careful looking after leaves it still looking and riding as good as new.Went to Prague-CZ on it last year.Off the France again next month for a weeks touring giving this railway lark a short break! 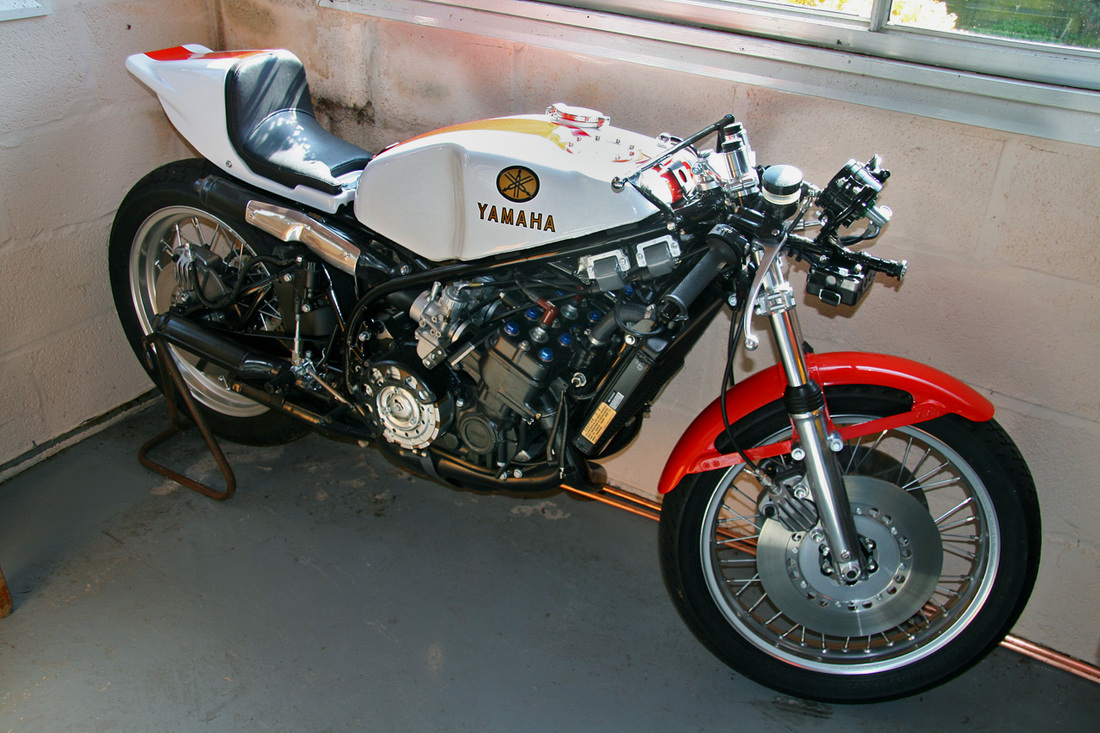 Was there ever a meatier racing motorcycle than Yamaha's legendary TZ750F? Only about 460 or so were ever built from 1974 to 79 of this 'Racing only' machine and this one came from the 1979 batch comprising just 97 examples.I bought this bike as a rough rather butchered example that had been recently imported from California-USA. Everything except the frame,fuel tank,instruments,front fender and forks were remade,restored or replaced.It was nearly 20 years ago when the restoration was completed.Nowadays these Big-TZ's are very highly prized and very few now appear up for sale.This one never will be!----------A Racing Icon----------------------------------------------1989 to date in my ownership (25 years)------------- 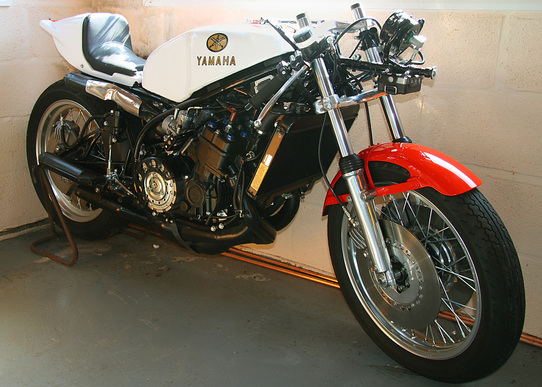 Classic racing Yamaha TZ750-e manufactured in 1979 and restored by myself between 1989 and 1996.Never been run since rebuilt,not even brake fluid in the system.A total Classic now.Only 97 were made that year out of a total production run of less than 500....(Only about 200 with monoshock suspension....models d-e and f. like this one). 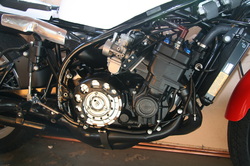 Here is a close up of the power plant of my Yamaha TZ750.A purely functional piece of kit designed just for racing with no pretensions towards road use whatsoever. Water-cooled 4-cylinder 2-stroke with reed-induction and 4 carbs with no filtration.An air cooled clutch and 4 unsilenced expansion boxes pretty much say it all. In racing terms these days a complete dinosaur,2-strokes are now firmly consigned to the history books. Never the less a highly regarded racing classic that is now approaching 35 years old! 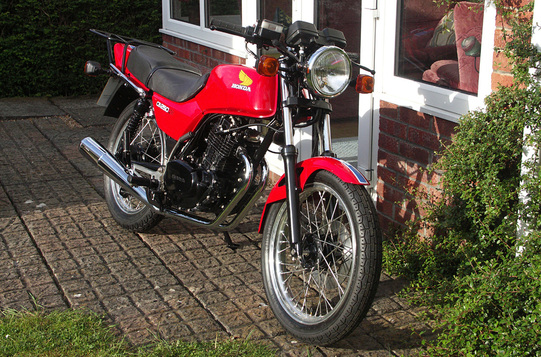 Single-Cylinder Honda CB250RSa (1980) Owned this bike since 1984 and used it regularly up to 2005.By that time it was pretty well worn out.A decision had to be made,do I scrap it? or restore it?....Well after all that time I couldn't part with it so restored it.Did all the work personally including engine rebuild.Spraying the Paintwork.Electoplating all nuts and bolts and even rebuilding the wheels myself! Not  original but just to a good useably standard! Completed it in 2006 after a 2 year leisurely rebuild  but still not used it since! (No rush!) That will change this year (2012) with the ridiculous price of fuel.As it does 80mpg a perfect tool for travelling to do railway pictures! .........

Late news flash! A new sealed gel battery,indicator relay and a tank of fresh fuel have been applied.MOT time looms (Aug 2012).---This it passed with flying colours but the carburetter was well blocked up due to 8 years out of use so it required an ultrasonic clean...All now ready to go --Road Tax next! (Sept 2012) ----Now running as good as new.....So far just 200 miles with no problems,all carburation problems now overcome.Is running as good as ever.......

As of October 2013 I have now rode it a total of 1000 miles with no issues whatsoever.A fresh MOT and Tax-Disc means it will be in regular use (weather permitting) for at least another year.

Now in 2018 it is stored under the SORN regulations and no 1980 bikes of this type are currently on UK roads! 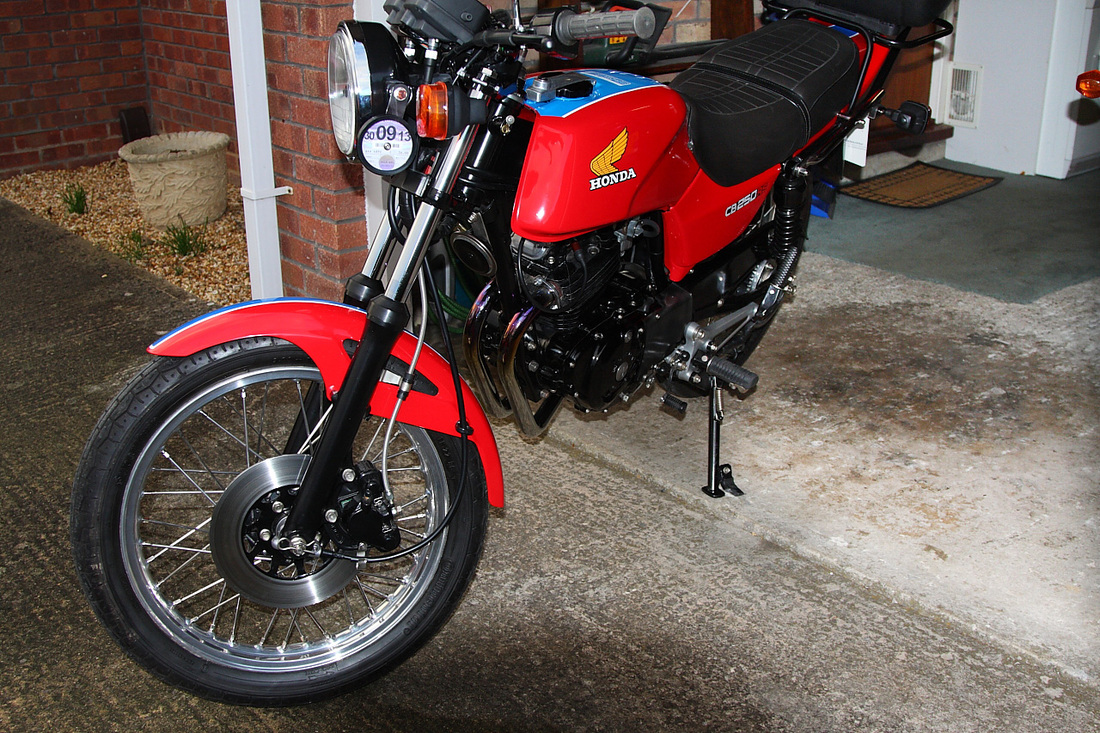 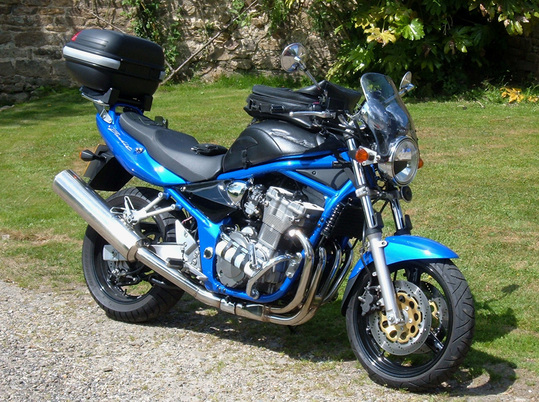 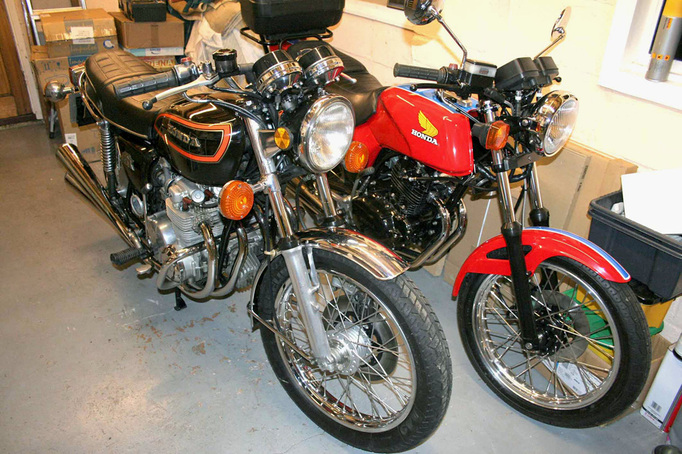 Here is my Honda CB550K3 (1980).Acquired in 2006,although it looks Ok it is a long way from the sort of condition it deserves to be in! It will be fully restored to a similar standard to the CB250RSa behind it.It has now been 7 years since I bought it in Middlesborough. It will get fully restored eventually......Honest!.....

Update---2018. Sadly this bike will not now be restored by me.Acquisition of another CB550 took priority and several major components from this machine---Tank/Seat + a few minor parts ended up on that restoration.It is now up for sale when I can get round to listing it on Ebay.So after 12 years of ownership it's Bye-Bye! The bike it donated some parts below can be seen below. 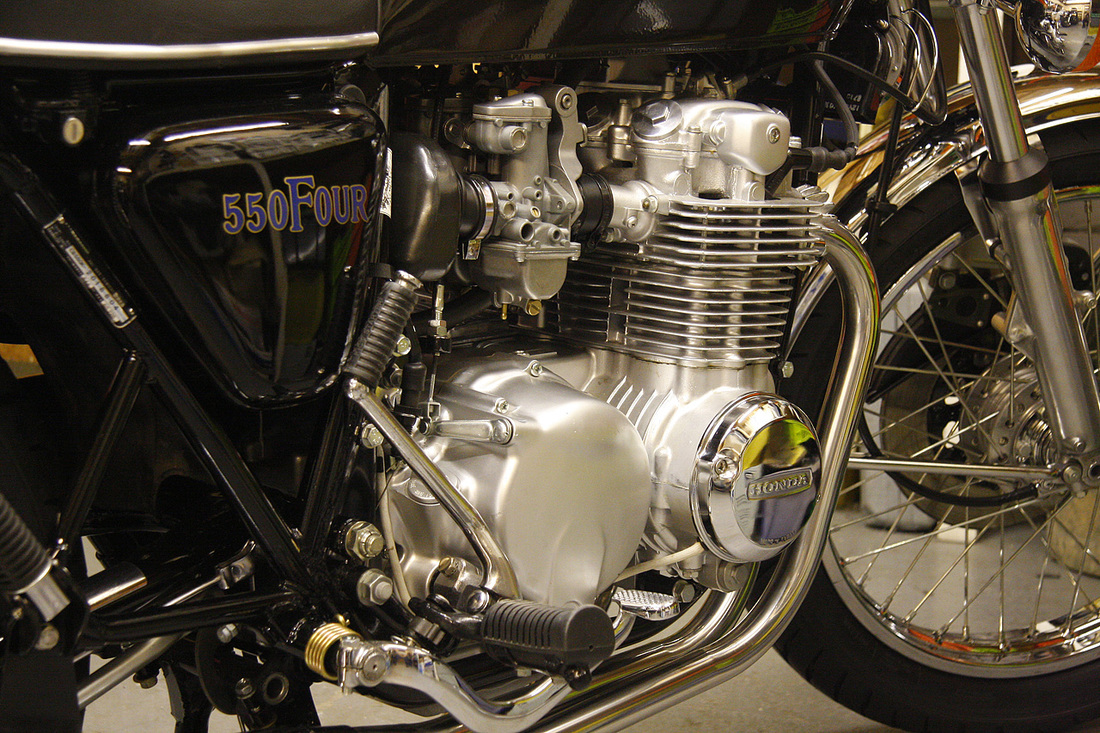 Finally after three years of on/off work this Honda CB550 (1977) is now complete.The costs of motorcycle restoration these days (If you want to do it properly) far outweighs the value if it was ever to be sold!,they do tend to become a labour of love!This then will be my final restoration and at least I can say I went out with a good'n!-----17 september 2016-----