An early I-CO CO-I design that was finally withdrawn from the National network in 1989. This design totalled 127 examples (Class-45) and 56 examples of (Class-46)  of which 11 still exist in preservation. 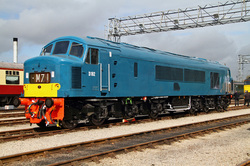 'Peak' D182 a Class 46 that was 46045 stands in the yard at St Philips Marsh on exhibition wearing a striking shade of Chromatic-Blue. These 1 Co-Co 1 engines were a common sight in Bristol in the early 1960's having been the class that ousted steam off the Birmingham to Bristol line. 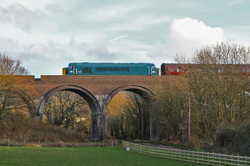 45149 hangs on the rear of '2C38' as it crosses Stanway Viaduct going to Cheltenham from Laverton.With the sun about to drop over the horizon this spot being almost head on was the best on offer her today.No doubt in the summer months a angle will be far better.I will return then to try again! 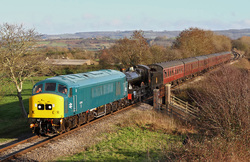 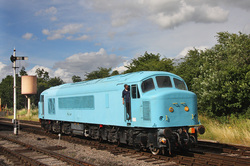 After several failed attempts during the day to obtain a shot of this recently revived 'Peak' 45149 all of which ended in sunless failure I finally managed to nail a shot of it in the sun at Toddington as it was rolling back to the shed complex at the end of its working duties for the day.Here the light blue undercoated  anonymous 1-Co-Co-I catches the sun in the station area.Almost certainly after this seemingly trouble free introduction back into traffic after many years of painstaking restoration a coat of BR-Blue will now be quickly applied and this ghostlike appearance will be a footnote in history!. 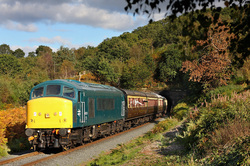 The Autumnal colours here at Foley Park Tunnel are accentuated by the sunlight starting to yellow as the late afternoon wears on.No complaints though as the resulting picture of 45133 exiting the tunnel on the 15:56 from Kidderminster to Bridgnorth is superb.Note the stock change,it is now hauling a set of GWR coaches in the traditional Choc&Cream of that company.Such a pity a bunch of arm waving quasi-nazi's were in the front coach! 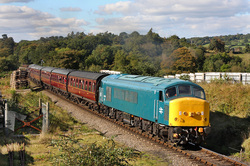 The big blue Sulzer 45133 rolls past Bewdley-South hauling a superb set of ex-LMS type steel bodied coaches.Although of LMS design some of this set were constructed well into the nationalisation era up to the mid 50's.The working was the 13:33 off Bridgenorth. Amazingly even at this time with mid afternoon approaching all trains were running pretty much in their correct timetabled slots.No loco failures or bodies on the line today! 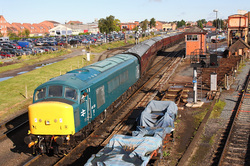 Visiting 'Peak' 45133 from the Midland-Railway at Butterley performs another positioning move  in and around Kidderminster Station in readiness for the 11:20 departure.Here viewed reversing slowly backwards.Note how the buffers on the bogie look very off-centre to the main body.This was a characteristic of the early type-4's where all the running gear was mounted on the 'I-C0' bogies and not the main chassis. 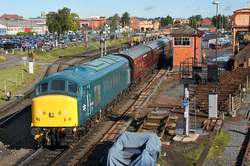 45133, the former D40 has always been an un-named engine.Its nice to see it remains that way! It is now 25 years since it was taken out of mainline service but today looks a good as new! Here seen drawing empty stock forward at Kidderminster on the SVR ready to back-back in to form the 11:20 departure to Bridgnorth on todays Diesel-Gala day. 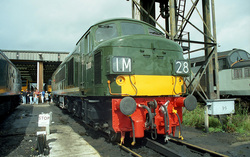 D100 'Sherwood Forester' stands in the yard at Bescot depot during the Open-Day there in 1992.Twenty years later it now wears BR-Blue and runs under its TOPS number 45060 and is based at Barrow Hill. 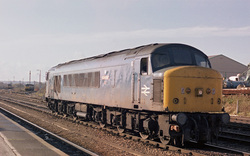 Peak 45128 complete with its Tinsley unofficial name 'Centaur' stands in Westbury about to return towards Bristol.Apparantly it had just brought in a short freight that morning from Gloucester-Yard coming only as far as Westbury. It was to survive for a few more months in general use before being removed from service in Feb-88 then re-instated as a railtour engine.Finally going in May 89. One cab survives in preservation,formally at the G&W-Rly but now in South-Wales somewhere being restored.
..14 november 1987.. 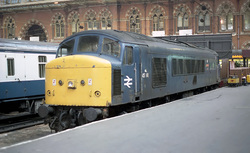 45141 the former D82 complete with its unofficial 'Tinsley' painted on name 'Zephyr' sits against the buffer-stops in the old St-Pancras station years before it became the rebuilt terminus it is now.This loco had less than a year to live,being taken out of service in August 1988.Final cutting up was in March 1992 at MC Metals of Glasgow. 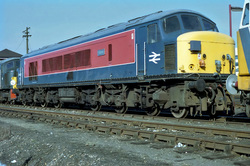 Departmental Loco 97403 'Ixion' wearing its unique livery stands in line at the
Basingstoke Rail Day along with many other exhibits.This engine went on to
become the property of Pete Waterman and eventually made it back on to the
mainline as D172.As it is a Class-46,this type is comparatively rare in
preservation compared to the Class-45 type. 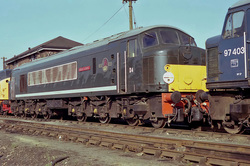 This is D4,one of the initial batch of just 10 original 'Peaks' built in 1959 and    1960.Regretfully the prototype D1 'Scafell Pike' didn't make it into      preservation so this has the honour of being the oldest survivor on them all.
This one carries the name of the Peak 'Great-Gable' and normally lives at the
Midland Railway Centre at Butterley. Even now 28 years after its appearance
here at the Basingstoke Rail Day it is still there.