During 1999 and 2000 EWS sent 40 or so 37's to the South of Franch on contract to operate the ballast and construction duties during the building of the TGV route from Paris to Marsailles.based south on Montelimar at Eurre. These are some of the shots taken during a week long expedition to do just that. 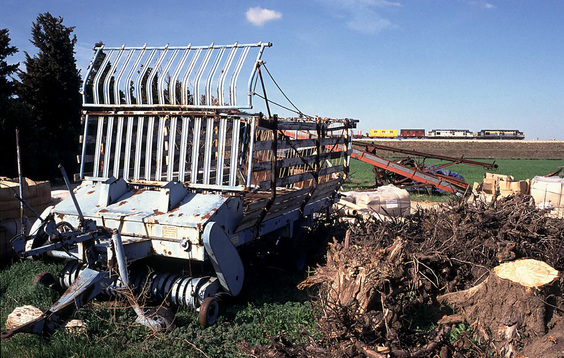 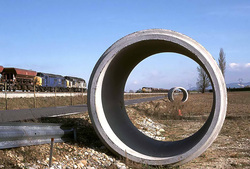 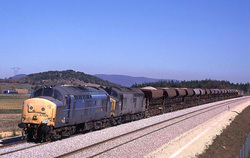 Mainline-Blue 37074 is coupled with 37162 on a loaded ballast waiting to move into section to deposit the load.37146 and 37137 were on the rear.There was a red flag placed in the track just in front of 37074 but as the train was deserted we removed it,took our shots then replaced it! Location was next to the A7 Motorway at a location known as Espeluche.Although the skies were cloudless the temperature rarely exceeded 10 degree C.Spring is quite chilly around here so close to the Alps.
All the engines in this pictures except 37146 were disposed of by 2006.37146 is now preserved at Kirkby-Stephen by the Stainmore Rly-Co. 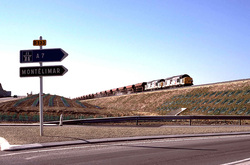 A pair of Transrail Big-T's 37683/37693 plods steadily along at Chateanea dropping yet another layer of ballast on the new TGV line.Location easy to work out from the foreground road furniture! 37693 is no longer in existance having met its end in April 2011 after over 10 years of storage after coming home for France in October 2000. 37683 has been more fortunate having been bought by DRS and now sports their 'Compass Livery.Currently at the Crewe Heritage Centre stored on public display but looking quite immaculate! 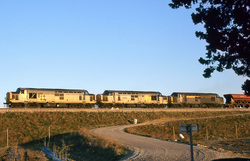 The 1st line track laying train was usually triple headed as seen here at Donzare.It had finished its work for the day and was waiting in the queue to head back to the main depot at Eurre.37796 was leading with 37261 and 37196 behind.The train once it got rolling had to immediately attack an incline far steeper than the Lickey Incline back in the UK.The sound it made was pretty impressive. Only 37261 now survives,stored with DRS at Barrow Hill.The other two both got broken up in 2009 at Booths in Rotherham. 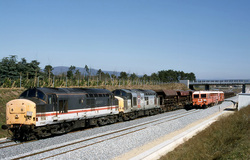 Still with its InterCity Swallow livery reasonable intact 37685 paired with 37672 sit on ballast train at St Andeol north of Allen awaiting its turn to drop ballast. Note the Colas Track Machine.At that time a name that was pretty unfamilier to UK rail enthusiasts. Not any more!.  37685 still works in 2014 but unfortunately wearing West Coast Sludge Brown whilst 37672 died at T J Thompsons scrapyard as recently as December 2010. 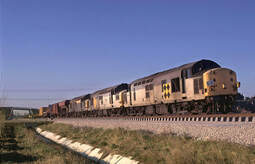 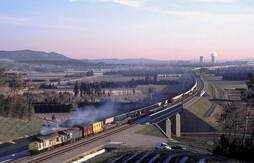 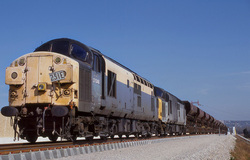 Dutch liveried Split-Box 37046 paired with 37238 stand in the sunshine on the embankment at Pierrelatte waiting for the Turkish ballast team to arrive so it can discharge its load on the still bare sleepered track here.Note the 2nd line had up to then not been installed. 37238 was scrapped after returning to the UK,ending its days in Booths of Rotherham in March 2009 whilst 37046 fared little better.It lasted a further 6 months before being cut in the same scrapyard. 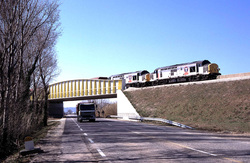 A pair of Transrail liveried loco's sit on a brand new bridge over the D59 at Feverolles.South of Montelimar.At this time only one track had been laid with no ballast or overhead masts to spoil the view!. 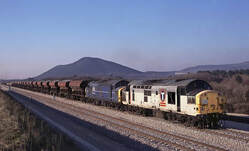 Transrail 37100 minus its watertank along with 37077 head a train of loaded french ballast wagons ready for another days work on the new TGV line.Here it is parked ready to go at Allen south of  the Eurre Depot along with several other trainsets.All had double 37's on each end.If you saw the inclines on this line you would understand why.The track is dead straight but gradients make the Lickey-Incline look like a slight rise in the track!   37077 died in Jan 2010 at Booths after 10 years of disuse upon returning from this job but 37100 has fared much better.After a full overhaul it now runs around as Network-Rail 97301 and is currently very active. 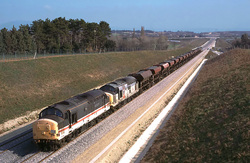 Double 37's each end was the norm on the ballast workings out of Eurre on the southern section towards Orange.Here a typical working with 37685/37672 leading with a distant pairing on 37696 and37708.This place was known as Couvent-de-Beauvoir.Note the steep gradients.No need for TGV's to worry about these with many thousands of HP available.
Of these four 37's shown here only 37685 still survives in active service with West-Coast Rly-Co.37696 lies derelict at Long-Marston whilst 37672 and 37708 both were cut up a few years ago.
..07 march 2000.. 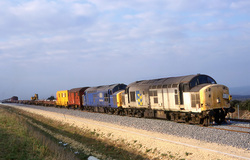 37515 and 37803 stand at Allen with the '2nd line' track laying train ready to depart for the worksite at Donzare.These trains were sent out in the early morning from the main Base at Eurre after being reloaded with fresh supplies of sleepers etc overnight.The line being constructed was the new TGV line from Paris to the southern city of Marsailles.The nearest large town to the worksites was Montelimar in the Department of Drome. 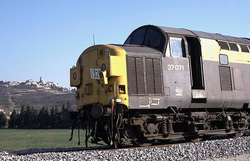 Originally numbered as D6771 this dutch 'split-box' sits in the sunshine at Pierreletta waiting to return to base at Eurre after dropping its load of ballast for the then single-line southbound track of this new TGV Line.It was repatriated in October 2000 after the contract finished but never worked again.Eventually going to its grave in October 2005 at CF Booth's at Rotherham.
..06 march 2000.. 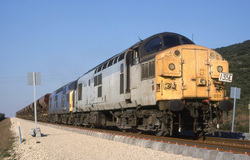 37037/37074 stand ready to do the ballast drop on this section of line that up to now has no ballast whatsoever.Several passes being required to bring the ballast up to the required depth.This location is Allen situated East of Montelimar.Mainline Blue 37074 ended up being scrapped at Booths of Rotherham in 2005 whilst 37037 now leads a pampered life preserved and fully restored as green D6737 on the South Devon Railway.