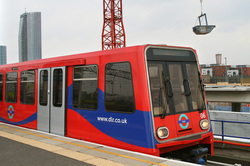 Another aspect of the development happening in this area of London apart from the activity still going on in the Olympic Park Area is the commencement of construction of the massive 'CrossRail' project taking railways other than 'tubes' from East to West across the Capital. Behind DLR No-6 at Pudding Mill Lane in Stratford can just be seen part of a new Rail Flyover under construction for that massive undertaking.This whole area is just one big building site!  (Note the Class-67 in the background!) 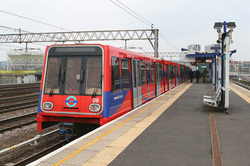 Docklands Light Railway number 06 pauses at Pudding Mill Lane with a working going to Stratford.These units are driverless but all trains have staff on them anyway so it all seems a litle bit pointless! The structure in the background is the 2012 London Olympic Stadium.