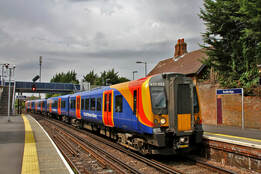 There are altogether 127 sets of these 3rd-rail Siemens 'Desiro' EMU's in service with South Western Railway.This one.450022 is seen passing through Redbridge with a 12:50 from Poole to Waterloo service '2B48'. 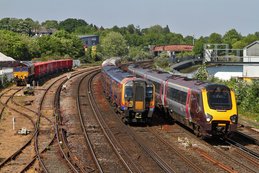 This is a fleetingly busy moment here at Mount Pleasant Road in Southampton.EWS-GM 66013 stands in the 'Up' sidings about to depart for Wembley with some empty MMA's whilst a Voyager bound for Bournemouth passes a pair of SWT-EMU's going north. 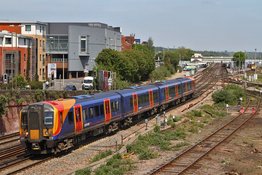 SWT 450116 runs from Eastleigh down to Northam C.S.D as an ECS '5B29' passing Campbell Road in Eastleigh. After over 20 years of running the services on the Southern,SWT has been booted out of the franchise in favour of a bunch of chinese investors in league with 'yes you guessed it' First Group! Just like personal banking,car insurance and cable-tv if you do a good job and are a loyal customer to the government or what-ever you end up getting shafted because apparantly the bottom line is the most important feature in any deal.All part of the Cesspit
of privatisation! 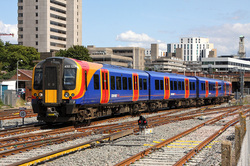 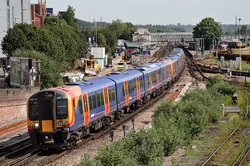 Here is an ECS from Waterloo going to Northam-CSD.Running as '5B91'.It comprised of 450108 (leading) along with 450546 and 450119.Although it was running non-stop the actual speed through Eastleigh station area was quite slow due to a severe speed retriction in place there. 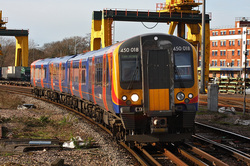 An 'In your face' type shot of Siemens-Desiro 450018 as it rushes towards me speeding non-stop through Millbrook in Southampton at about 60mph.This was '2B48' a stopping service (Not here though) from Poole going to Waterloo.
This uncropped shot was taken with a 70-200 L zoom set at 105mm (about 170mm in old 35 SLR film terms)  Nice to use this lens occasionally! 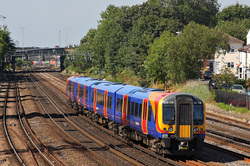 '2B31' the 11:39 from Waterloo going to Poole in Dorset passes Saxon Road Footbridge in Southampton. 3rd rail EMU 450119 in colourful Red/Blue and Orange was doing the duty. 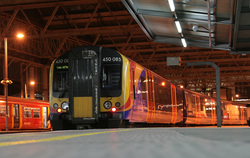 450085 sits quietly under the canopy at Waterloo waiting time. This station in the evening on a Saturday is a vastly different place to the madhouse that it is during the working week around teatime! 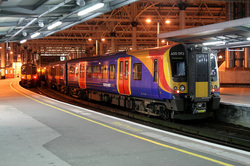 450093 sits in Waterloo against the blocks awaiting its next working. 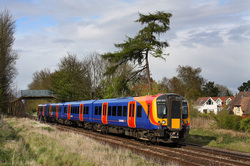 450003 passes St-Cross shortly after departing Winchester going to Portsmouth via Eastleigh '1T45'.It departed from Waterloo at 15:09. 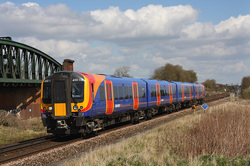 The 12:09 from Waterloo going to Portsmouth via Eastleigh diverges at Worting heading for the south coast.450118.one of the SWT units in the more colourful Blue/Red/Orange colour scheme working the duty. 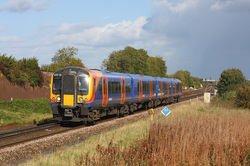 The 13:39 from London-Waterloo bound for Poole in Dorset diverges at Worting on the seemingly single line at the flyover complex.450 124 in the colourful South-West Trains livery doing the job. 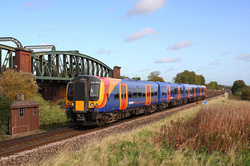 The 11:39 from Waterloo going only as far as Southampton-Central passes the Flyover as it takes the seemingly single line down main towards Southampton.450 095 being the Unit in question. 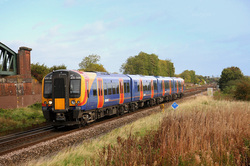 Not a service trian but a stock move from Clapham-Junction down to the main depot at Northam-CSD of servicing.Running as '5B97' this unit 450 569-HC is normally used on the high density commuter routes around Waterloo.The 'HC' in the number denotes 'high capacity' meaning either less seating(more standing room) or more seating tightly packed together.Viewed passing the now dead Willow-Herb Bed there at Worting.