Originally built in 1965.Total class strength was100 units.Still in use today 47 years later with Freightliner and Network-Rail in the UK.Some have been exported to Hungary. 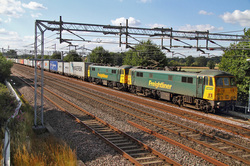 Another pair of 86s,this time heading southwards pass Easenhall in somewhat backlit lighting conditions.86614 and 86612 draw their fully loaded '4L18' from Ditton southwards going to Felixstowe.The electric locomotives are actually removed at Ipswich and replaced by diesel traction as the final few miles down the Felixstowe line are not currently electrified. 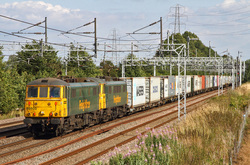 Twenty years ago these Class-86 type  engines powered most of the Class-1 trains along this line from Euston to all points North.Nowadays a handful remain in service with Freightliner working in pairs usually on container-trains from Felixstowe to the Midlands.Here are 86605 and 86628 heading north past Easenhall on '4M87' the 11:13 from Felixstowe heading for Trafford Park-FLT. 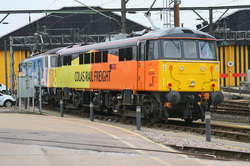 Another slightly different view of 86701 and 86401 at Willesden-TMD.The lead engine was expensively re-liveried into 'Colas' colours for a short trial of palletised goods for Tesco into London.Nothing appears to have come of that and so these valuable rail assets as far as the UK scene is concerned are deemed valueless! I expect this loco to gain 'Floyd' colours and be exported in the fullness of time. 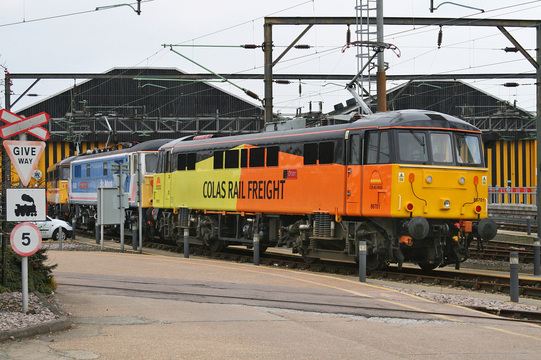 A stop was made at Willesden-Junction on the North-London Line whilst returning to Kensington-Olympia from Stratford to picture the three 86's owned by Europheonix-Rail and the AC-Locomotive Group parked up at here at Willesden-TMD. Here are 86701/86401 and 86213 thoughtfully parked up at the front of the Depot.Photography being possible through the locked 8ft high palisade fencing.No doubt one or more of these engines will find further work but not in this country,probably Bulgaria or elsewhere in Eastern Europe.A sad indictment of our railways that such valuable assets are no longer required even as his country is embarking on a massive electrification of many important passenger and freight routes.
..23 february 2013.. 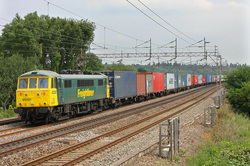 '4M81' the Felixstowe to Crewe service passes Chelmscote with a good load behind the 'Pet' 86501 looking quite smart with freshly repainted cab-ends.Shame the sun was hiding behind some thin cloud when this working chose to pass! 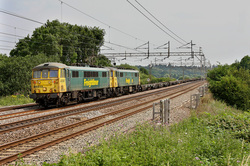 Veteran pairing 86613 and 86627 head northwards past Chelmscote with its usual load of naff-all on '4M54' from Tilbury heading for Crewe-basford Hall. 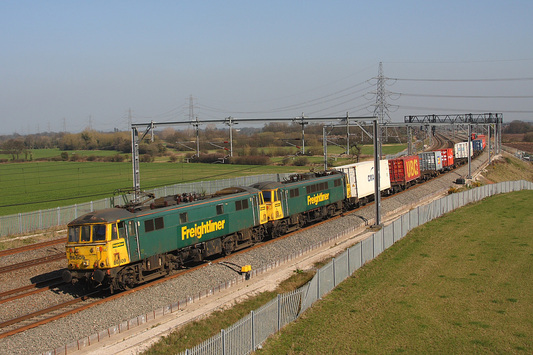 Electric-Pair 86609 and 86627 power north past Litchfield on '4M54' from Tilbury up to Crewe-Basford Hall.Apparantly FL crews are being trained on Class-70's at Tilbury---Could this be the end game for these veteran sparkies and this route? 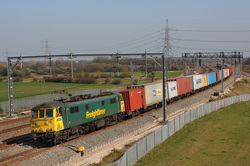 Now this engine seems like it is something of a Freightliner-Pet.Electronically modified to produce Class-90 performance it leads a charmed life.It has suffered several fairly major failures including fires but always seems to fight another day.This is the only 86 to regularly work on its own.Here it is,86501 heading north past Litchfield with '4M81' from Felixstowe (loco on at Ipswich) going to Ditton. 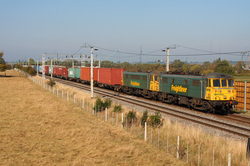 Veterans 86609 and 86604 head a freightliner '4L75' from Crewe going to Felixstowe.Seen passing Barby-Nortoft near the massive DIRFT at Daventry.
29 september 2011.. 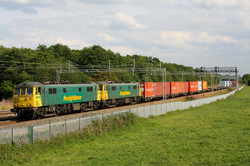 Another pair of the now veteran '86' class,86610 & 86632 sweep northwards on '4M54' from Tilbury-Docks to Crewe-Basford Hall.Millmeece is a superb spot for afternoon workings going north but literally nothing else.Such are the difficulties of getting decent shots on this stretch of the WCML.
..22 august 2011.. 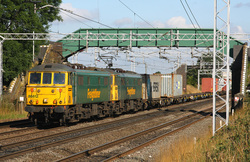 One of the more celebrated workings on the current WCML freight timetable is this,'4L75' the 09:58 off Basford Hall going to Felixstowe.Invariably a pair of the now venerable Class 86's.These loco's are now over 45 years old so must surely be coming to the end of their careers soon. Here are 86612 and 86627 humming past Chorlton shortly after commencing the journey south from Crewe.
..22 august 2011.. 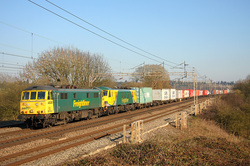 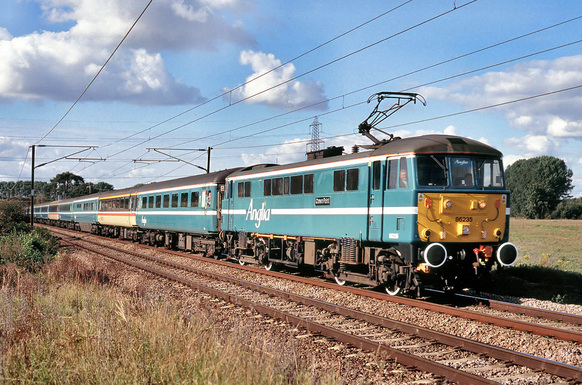 This was the final southbound Norwich to London-Liverpool St working booked for Class-86 haulage passing Needham Market bringing down the curtain for regular express passenger use for this long lived class.Their use extending from 1965 to this day in 2005,in total 40 years.Indeed the class is still in use in 2012 on freight services for Freightliner so still going strong after 47 years.This particular locomotive 86235 started life as E3194 and carried the names of 'Novelty' and Harold Macmillan' and finally 'Crown Point' before being withdrawn.This happened almost immediately after it hauled this actual train shown here.Today in December 2012 it still remains intact and stored at Long Marston awaiting its fate,either export to Bulgaria or scrapping for parts recovery.
Update--As of November 2016 having been exported to Bulgaria it has received a complete overhaul and full repaint
into 'Bulmarket-Red' livery and has had its 'Novelty' nameplates re-applied.--Glad somebody appreciates
these valuable railway assets because the numpties in this country certainly do not!
..17 september 2005.. 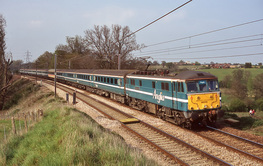 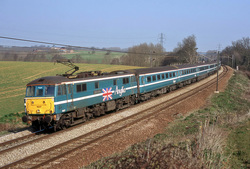 Anglia's 86227 'Golden Jubilee' is seen at Brantham pushing '1P16' the
09:30 from Liverpool Street to Norwich.This particular loco being adorned
with a Union-Jack Flag making it a little different from the rest of then
​  then current Class-86 fleet.The Class-90's were now quite common and by     September-2005 all the 86's were out of use.This loco wasn't even in             existence by then having been scrapped in Rotherham by July of that year.
No fairytale rescue and redeployment overseas for this one! 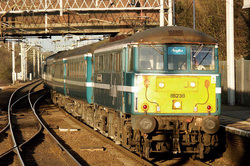 A late afternoon Norwich to London-Liverpool Street Express speeds through Marks-Tay.86238 'European Community' in 'Anglia' colours photographed around the time when Class-90's were just beginning to make an appearance,later to become a full replacement program.This particular locomotive was to survive just another 6 months or so being withdrawn in November 2004, then being scrapped in Essex at Boreham by June 2005. 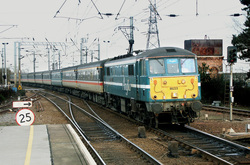 86223 'Norwich Union' slows for Manningtree with the 15:30 Norwich to Liverpool Street service.This loco,built in May 1966 as E3158 was 40 years old when this shot was taken.Two weeks later it was removed from active service and in May 2005 finally cut up. 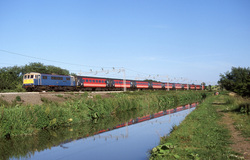 Electric Blue 86233 'Alstom Heritage' speeds northwards past the Canal at Ansty on the WCML going to Birmingham on a really hot summers day.This was the final summer for this loco.It was withdrawn a few weeks later in September and went to Long Marston for storage.At the end of 2012 it was exported to Bulgaria but only as a spares source for other 86's sent there earlier. 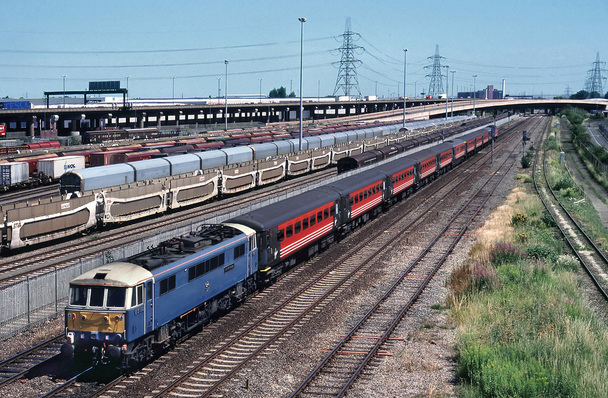 86233 running as Electric-Blue E3172 for its final months in service is seen being dragged through Washwood Heath in the centre of Birmingham on one of the famous Nuneaton-Drags.These trains were from Euston to Wolverhampton and return.Being hauled by Diesels 'off the wires' north of Nuneaton.This particular drag was being done by 47810.The '86' was taken out of service in November,just 16 weeks later and is still around, being stored at Long-Marston since 2007.Eventually in November 2012 this loco was finally exported to Bulgaria for further use with 'Floyd' regretfully only as a spares-doner for other 86's out there working. 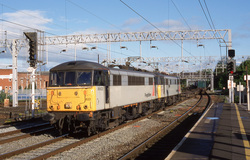 Freightliner pair 86622/86633 are viewed passing south through Stafford Station with '4L97' from Garston going to Tilbury.Whilst the lead engine remains in service 10 years later in 2013, 86633 'Wulfruna' was withdrawn less than a year later.It still resides stored at Crewe-LNWR in Jan-2013. 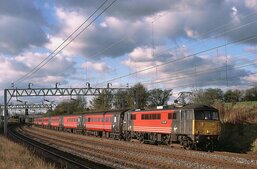 86256 Pebble Mill' sweeps round the curve at Heimes Farm just north of Norton-Bridge on the WCML heading south.Less than 3 months later this loco was consigned to the dustbin of history,although it wasn't until March-2006 that is was finally cut up by Ron Hull in Rotherham. 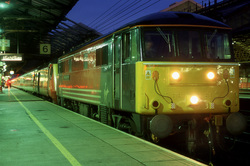 86251 'The Birmingham Post' seen here at Crewe with a failed HST,the 09:10 from Aberdeen going to Plymouth 43089/43196. Obviously the '86'
was replaced at some stage,probably at Birmingham-NS.Either just the locomotive with a '47' to continue the drag or maybe a complete trainset.As for this AC-Electric, it was withdrawn in late 2002 and today in November-2013 still clings to life stored at Long Marston. 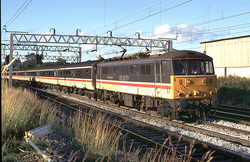 86231 'Starlight Express',probably named after a then current 'West-End' Show in London runs slowly past Shallowford on the slow lines having just come off the Stoke line at Norton-bridge about 3/4 of a mile further north.Loco had a further five years in service and was withdrawn wearing the then current 'Virgin-Red' of Mr Bransons Company.Amazingly in 2011 loco is still extant stored ay Long-Marston in the West-Midlands pending possible re-use.
.. 04 september 1997.. 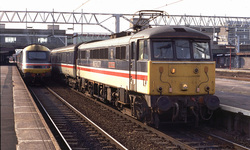 Inter-City 86204 'City of Carlisle' pauses at Stafford on a southbound I/C Express.Another year or so later it was withdrawn and ended up at Immingham-RFT of all places well off the OHLE.After storage for a further 5 years it was reduced to scrap by August 2003.The livery as seen in this shot was to be its last. 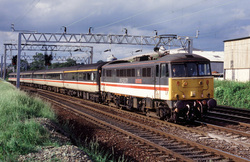 86204 'City of Carlisle' rumbles south on the slow lines at Shallowford just south of Norton-Bridge on the WCML having just come over the junction from the Stoke line.By this time all the long distance Inter-City workings had DVT's in their make-up but these short distance trains like this one from Manchester-Piccadilly going only as far as Birmingham -NS were still a conventional Loco & Coaches. This was its final livery as it was withdrawn in August 1998,just over a year later.The end came at Immingham-RFT of all places in July 2003. 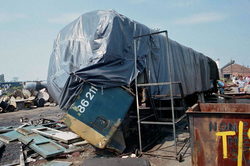 The sheeted remains of 86211 'City of Milton Keynes' sits bogie-less in the scrapping area at Crewe Works.This loco and 86249 'The Times' were involved in a serious accident at Colwick-Junction on '19 sept 1986' that regretfully resulted a heavy loss of life including the driver of this engine.These two were the first 86's to be withdrawn,in fact 86211 was the only member of the class never to recieve a repaint into I/C colours.