A class intriduced exclusively for the WR in 1961.101 examples built.Although quite reliable and well liked were all withdrawn by 1975 due to being seen as non-standard (Hydraulic transmission instead of Electric). 4 survive in Preservation. 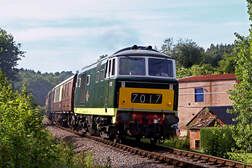 The West Somerset Railway's other resident 'Hymek'D7017 finally put in its only appearance of the day on the 15:49 from Minehead to Bishops Lydeard. Here seen at the very wooded Roebuck Gate road crossing going south.With just two further trains from Minehead to come over the next 2 hours and as it was now 17:40 I decided to call it a day and sped off home on my 600-Suzuki. 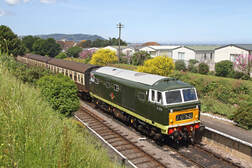 D7019 sits in\Blue Anchor with the 12:01 from Minehead going to Bishops Lydeard.Moments after the shot was taken some 'official' on the far platform bellowed at me not to stand on top of this bank here....Amazing! You get bollicked if you stand too close and also when you are the furthest one away..Health and Safety shite rules apparantly! 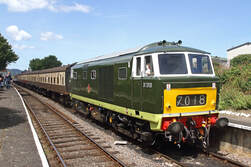 Beyer-Peacock Hymek D7018 looks immaculate standing in Blue Anchor having just returned to service after a very detailed major overhaul here on the West Somerset Railway at Williton.It is working the 12:01 service from Minehead to Bishops Lydeard.  I well remember this loco way back in the early 1960's as it often took me from Warminster to Salisbury during the 2-years I was at the Tech College there prior to starting work along with many of its classmates. 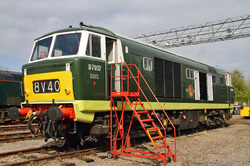 Hymek Type-3 Diesel-Hydraulic D7017 arrived here at St Philips Marsh-HSTD on a Road-Transporter,the only visitor to do so.Ironically it usually lives at the West Somerset-Rly barely 50 miles away making it the closest located guest locomotive! 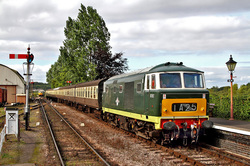 Type-3 Hymek D7017 in pretty much 'As Built' condition rolls slowly into Williton on the West Somerset Railway with the advertised 'diesel' trip the 15:25 from Minehead going to Bishop Lydeard.As a 12 year old I well remember this class taking over the Bristol to Salisbury workings (The first dieselization on that route) from GWR Halls and Granges and later in 1964/65 these engines carried me to Salisbury and back everyday for nigh-on 2 years to attend the College there. 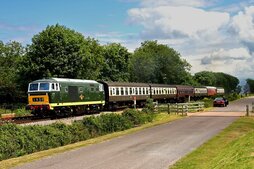 Hymek D7017 looking very early 1960's gets away from Dunster working the 13:00 from Bishops-Lydeard to Minehead service.I used to travel everyday from Warminster to Salisbury and back in 1964/1965 practically every weekday for the Technical College there before starting work behind various D7000's.The coaches then were mainly GWR Hawksworth stock unlike this motley rake of BR-Mk-1's. 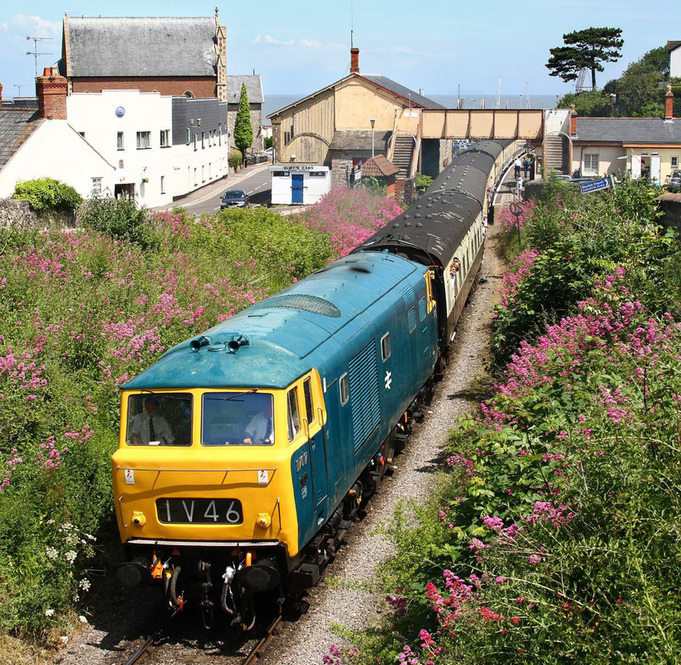 Looking superb in Blue D7017 gets away from Watchet with the 12:05 from Bishops-Lydeard going to Minehead on the west Somerset railway during  a Mixed Traffic weekend held in superb weather (For a change)!