Formally ARC Engines but now owned by Hanson in turn owned now by Heidelberg Cement.based at, or around the Mendip-Quarries. 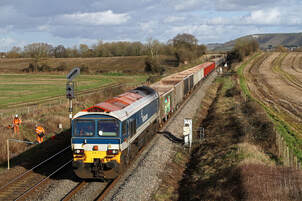 After about at least a week of continuous rain this afternoon was amazingly quite settled.So here is 'Hanson in the Sun' 59104 creeping slowly out of Westbury at Fairwood with the 12:41 from Acton-TC going down to Merehead as '7C77'.Note the shiny new JNA boxes in the train in a brownish/red livery.They are leased from a company called 'Thouax'.That's a new one on me???? 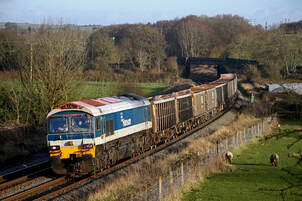 59102 rounds the bend at Great Cheverell on the B&H with '7C77' the 12:41 from Acton-TC going down to Merehead.Nominally a train of empties the first three boxes still have their load for some reason, 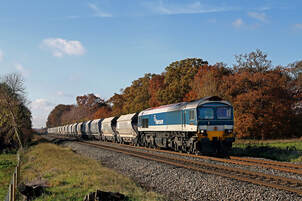 Last friday GBRf's 59003 on hire to Freightliner unexpectedly worked this train '7B12' the 11:23 from Merehead to Wootton Bassett.Hopes were high that it might do it again today but no! it was 'Good-Ol-Boy' 59102 that hove into view in perfect autumn light.    Its only been 22 years since I saw that 59003 going off to Germany seemingly never to be seen again on the Merehead Stone Trains.I guess I will have to wait a little bit longer.. 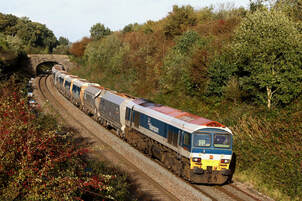 With just a couple of weeks to go before the clocks change(back one hour) this shot will be gone again until next spring.So here is 'Good Ol Boy' 59104 with '6V18' the 11:25 from Allington-ARC going down to Whatley Quarry.Not long now before the trees go brown and the loco's turn orange! 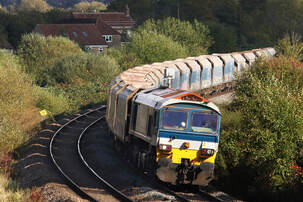 'Hanson in the Sun' 59101 rolls around the Westbury Avoiding Line with '7C77' the 12:41 from Acton-TC to Merehead.A somewhat unothodox angle due to the trains unexpected diversion avoiding the route through the station area.Pictured from Fairwood Junction farm bridge. 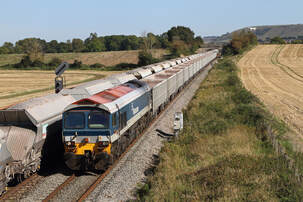 Busy-Busy-Busy! With '6L21' to Dagenham Dock as a backdrop 59104
comes away from Westbury at Fairwood with '6C68' the 12:25 from Avonmouth returning empties to Whatley. The aggregate taken to Avonmouth is then shipped to Bridgewater then lorried out to the new Nuclear PS-C Site under construction there at Hinkley Point. 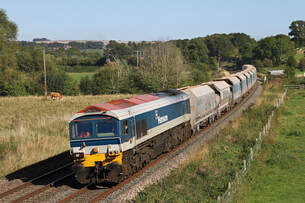 Given how nice the weather has been this month this is surprisingly only the 2nd 'on the nose' shot of a 'Hanson in the Sun' I have managed this month so far. Anyway here is 59102 with '7C77' the 12:41 from Acton-TC to Merehead.Quite a nice gathering here at Great Cheverell of various photographers from all over.About 5 or 6 altogether. The misery guts that lives in the house just here didn't do his usual shouting and moaning today.No doubt because he was well outnumbered which proves he is just a rank chicken! 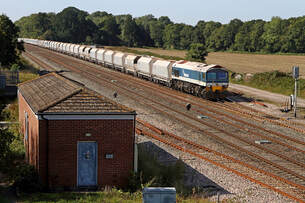 59102 pauses briefly in the Up-Loop at Woodborough on the B&H to allow a GWR Green-Worm to pass going to Paddington. 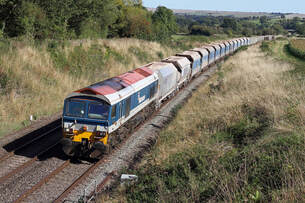 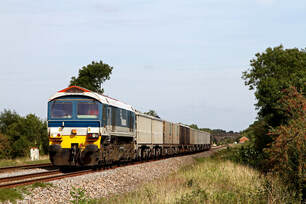 '7C77' the rather shortened boxes only 12:41 from Acton-TC to Merehead speeds away from Fairwood Junction having used the avoiding line thus missing out the Westbury station stop.Hanson 59103 being today traction. 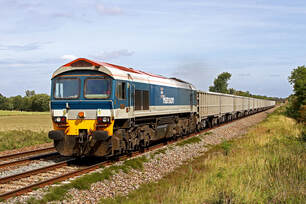 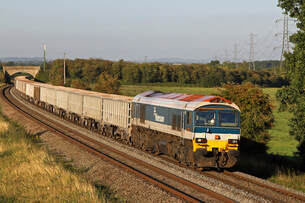 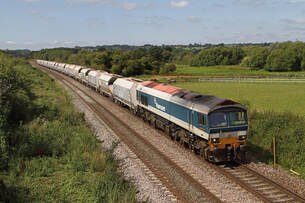 Good-Ol-Boy Hanson 59101 brings '7B12' into Westbury with yet more aggregate from Merehead (11:23 off) going to Wootton Bassett.Note the horses in the paddock behind the train.What you cannot see is the several BeeHives in the corner.The bees are quite an aggressive strain and I have had the pleasure of being stung here by them on this bridge on quite a few occasions! 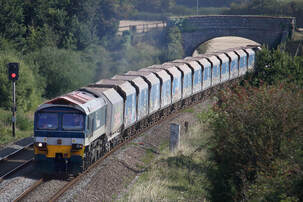 Hanson 59101 brings the 60 minute late '7C29' 06:27 from Acton-TC to Merehead through Clink.Of the twenty hoppers on the front of this train just one has escaped the attention of the graffiti scumbags that infest the freight-yards in and around the Capital. Just what are the Transport Police doing to stop this continual vandalisation??????  Not a lot by the look of things! 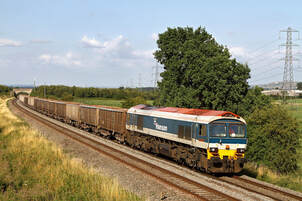 Here is the regulation 'Hanson in the Sun'.Todays effort being 59102 working '7C28' the 13:44 from Exeter-Riverside going to whatley Quarry passing through Berkley Marsh nr Frome.