Same Company( First) just didn't know what to call itself for a few years!.Is the largest operator of HST's in the country. 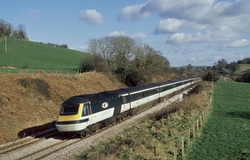 When FGW originally took over the franchise for the West of England Mainline to Cornwall from London-Paddington its first attempt at a new corporate livery was this 'Merlin' version.Here is 43003 (One half of the original Production-Pairing numbered 253001) heading west descending Bruton Bank.It is seen from the trackbed of the long closed S&D just where it crossed the GWR mainline.Naturally this view 16 years later in 2015 is quite impossible with bushes now totally obscuring the tracks! 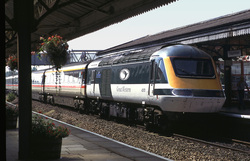 First incarnation of a privatised livery in the West was this version branded as 'Merlin-Great Western'.Seen on the rear of a Bristol bound service during its booked stop at Chippenham.43170 was named 'Edward Paxman' to commemorate the experimantal fitting in this Power-car plus seven others with Paxman VP185 diesel engines in an effort to improve reliability etc.Obviously not quite so successful as hoped for as now 14 years on in 2011 entire nationwide fleet now have German MTU units fitted! 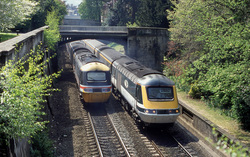 A pair of HSTs pass in Sydney-Gardens in the City of Bath.Both liveries are now long gone.The 'Merlin' styling for Great Western was their first attempt at a new look.15 years later we appear to have settled on the rather bland FGW-Blue we see today.Just about the worst HST livery in the country!
Note the trees growing out of the brickwork here in the Gardens.Its a pity NR or Failtrack don't concentrate on doing proper mtce on the infrastructure rather than squander money on pathetic percieved H&S crap such as the fence that has AND will ruin this iconic location for garden visitors since 2012 and for all time!