From Autumn-2017 some Units are now operating on Paddington to Bristol and Paddington to Swansea services.
The numbers are set to increase as more get commissioned.
​Several sets are currently out on mileage accumulation testing most days on The GWR. 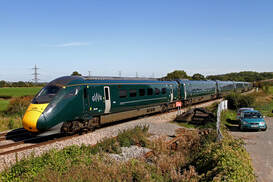 9-car Bi-Mode 800320 passes Bunns Lane nr Witham Friary with '1C77' the 10:33 from Paddington heading for Paignton.Yes that is Dave Brush's
Focus dumped in the lay-by. Hardly Ivo Peter's Bentley that's for sure! 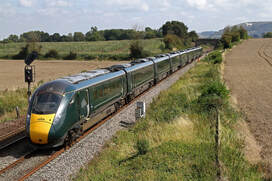 Like them or louth them the Class-800's are now of the everyday scene in and around the Westbury area.So an occasional shot just to remind people of their existence will be featured......
Here is a 9-car variant 800311 coming away from Westbury with '1C77' the 10:33 from Paddington heading for Paignton.The Westbury White Horse has seen many designs of passenger trains pass by over the decades and will certainly outlast these 'efforts'. 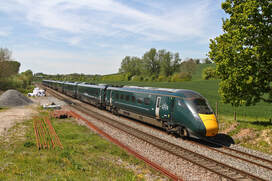 Hitachi -IEP 800313 swings through Grafton East-Junction (Well the site of it anyway before it was removed) with '1A83' the 11:32 from Paignton going up to the Capital.Lots of Network-Rail crap lying around here.Par for the course these days regretfully! 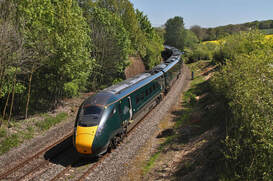 ​ Another shot that has reappeared recently is this one looking east off the road bridge nr Crofton Pumping Station.IEP-800311 rolls round the sharp curve here working '1C77' the 10:33 from Paddington going down to the seaside at Paignton. 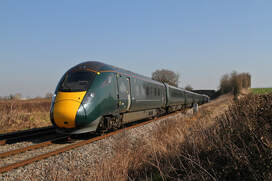 '1C47' the 10:33 from Paddington to Taunton accelerates away from its Westbury passenger stop and is pictured approaching Fairwood Junction.
Set-800318,one of the 9-car version was doing to duty.This set looked quite dirty,a light coating of grime makes this GWR-Green livery look even worse than normal (If that is possible of course!). 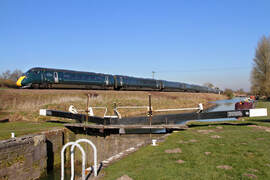 Another variation on the Hitachi 'worm' is this 9-car type 800316 here seen sweeping through Crofton with '1C51' the 12:33 from Paddington to Taunton.Services along here are currently quite plentiful due to the Taunton to Exeter line being closed.Pity its is mostly these ghastly things! 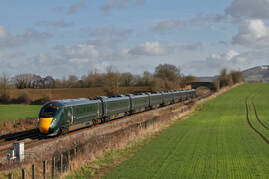 '1C47' the 10:33 from Paddington to Taunton moves away from Westbury under the watchful eye of the famous local 'Horse' landmark.IET 800312 a 9-car version was doing the job. 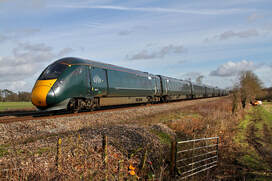 Hitachi 9-car 800316 cruises past Fairwood nr Westbury with '1C46' the 10:03 from Paddington going only as far as Taunton.The line beyond to Exeter being closed at Whiteball Tunnel for work repairing that structure. 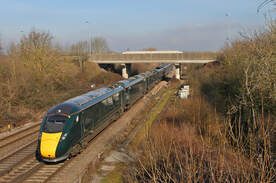 GWR's 9-car Hitatchi 800311 glides down through Didcot North Junction taking the avoiding line .It was '1P25' the 09:54 from Great Malvern to Paddington. 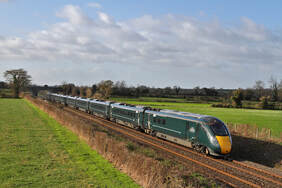 IET's are now becoming increasingly common on the B&H as the HST replacement programme continues.Here is a 9-car example 800319 with '1A80' the 11:12 from Exeter-St-Davids to Paddington.Seen at Cowleaze Farm Lane -Bratton. 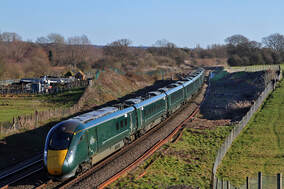 These Paddington to Paignton services are now solid Class-800's.Here is a 9-car version of the GWR-worms 800319 crossing Hungerford Common having departed the Capital as '1C77' at 10:33. 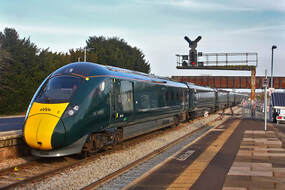 Looking almost brand-new 800301 rolls into Westbury over the newly relaid track layout on the north end of the station with '1C77' the 10:33 from Paddington to Paignton in a weak patch of sun.Of some minor interest this particular IET has the GWR monogram displayed on the nose cone.Yesterday this working was an HST although mostly it is now this Hitachi 9-car plastic! 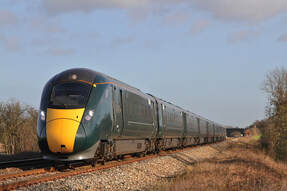 IET 800308,one of the 9-car variants runs down away from Westbury at Fairwood with '1C77' the 10:33 from Paddington to Paignton.No doubt to ran as far as Newbury under electric power since that section was finally brought into use just after Christmas(Only a few years late!!) 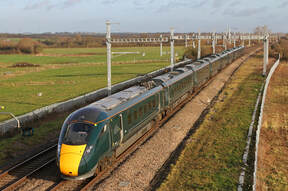 9-car version IET 800319 passes South Marston nr Swindon actually drawing its power from the OHLE.Something of a novelty,most of the Hitachi's that were passing were on diesel power would you believe.This working '1G29' the 12:15 from Paddington to Cheltenham Spa will revert to diesel power anyway onwards from Swindon as the route from there to Cheltenham is wire-less.Its a funny way to run a railway! 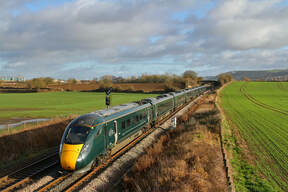 Hitachi 9-car 800304 passes Fairwood with '1C77' the 10:33 from Paddington going to Paignton.These trains to that Devon resort are now mostly IET's. 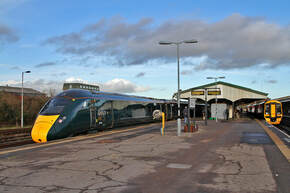 Newbie 800309,one of the 9-car versions on the sadly now all too common IEP's is seen at Westbury during its station stop whilst working '1A83' the 11:32 from Paignton to Paddington.Of interest is these platforms are now fitted with new electronic train departure displays.Very useful for informing passengers just how late their train is going to be! 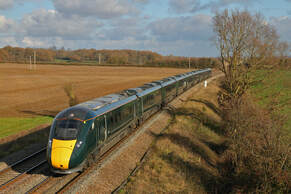 The IEP take-over of most of the GWR services will be almost complete by an unofficial target date of 10 December 18.After that time only the services from Paddington to Plymouth and Penzance will remain largely HST's,at least for another few months anyway.Here is one of the Cornwall destined Hitachi's working the 10:33 from Paddington to Paignton '1A77'.These diagrams to Torbay are already mainly these plastic HST replacements.This one being 800310 and is seen passing Berkley Marsh nr Frome in full sunshine.Naturally my target of 43002 and 59205 on a Theale empties both passed in much duller conditions! 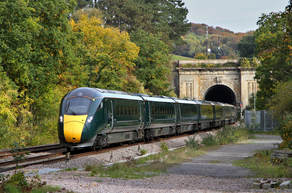 9-car Hitachi 800315 bursts out of Middle Hill Tunnel in Box into a patch of weak autumnal sunshine working '1C15' the 13:03 from Paddington to Plymouth via Bristol-TM. 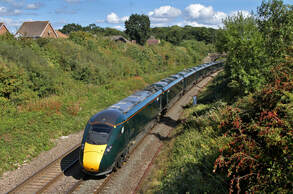 9-car IET 800305 glides silently through Frome at Clink with '1C77' the 10:33 from Paddington going to Paignton.Sadly all of these Devon bound services are now booked for these plastic-worms. 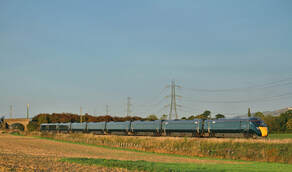 The nearly-new GWR-Green liveried 800313 9-car Japo-Plastic Pig slows for Clink Road Junction with '1J91' the 17:07 from Paddington to Frome.The duty has been IEP now for quite some time.Only the Plymouth and Penzance services via the B&H remain currently exclusive to HST's.Viewed over the recently harvested cornfields at Berkley marsh nr Frome. 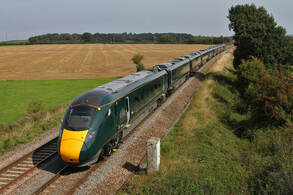 Brand new in totally unblemished condition GWR 9-car IET 800316 makes almost certainly its first appearance of probably many thousands here at Berkley Marsh nr Frome (Even the bogies and wheels were positively gleaming).These 'things' are now standard fare on the Paddington to Paignton roster.This working being '1C77' the 10:33 from Paddington to Paignton. 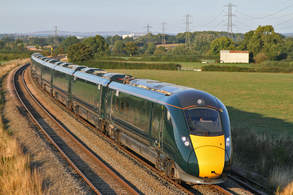 Sadly the week commencing the 20th August (yesterday) saw the start of 'IET' scheduled workings over the B&H to Devon and Cornwall during the week.Those trains are to mainly comprise 800/3's which are the 9-car version with more engines and extra power to cope with the Devon banks (apparantly).Here is 800307 seen at Berkley Marsh with '1J91' the 17:07 from Paddington going only as far as Frome.This very new 800/3 set will no doubt be speeding west regularly as the diagrams slowly replace the HST's with Green-Plastic. 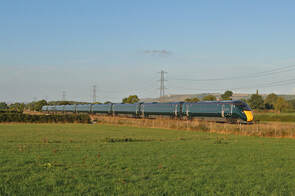 800306 passes the green fields at Berkley Marsh with '5J91' the 19:13 ECS from Frome off of '1J91'.For some reason this evening this train returned to Paddington instead of going to Stoke-Gifford as usual? 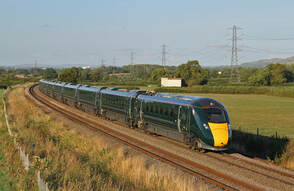 Not a shot I am particularly excited about although it is the first one I have recorded of an IET 9-car 800/3 in service.This is the type that is set to fully replace HST's on the B&H sometime in the coming months. So this is 800306 with the now regularly diagrammed for IET '1J91' the 17:07 from Paddington to Frome.Seen at Berkley Marsh as the set is slowing for Clink Road-Junction. 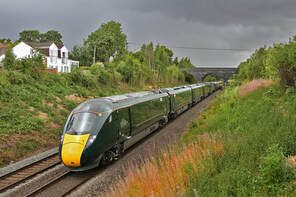 Sadly not in decent light but worth recording anyway due to its significance. Here is the first scheduled revenue earning service of an IET from Paddington (08:18 ff) going to Devon,Paignton actually.It ran as '1C75' and really signifies the true beginning of the end of HST's to the South-West. 800309,one of the dedicated 9-car Units for the Penzance services was doing the job.Seen at a moody Styles Hill in Frome.