This up and coming Company purchased 10 redundant locomotives of this Class from D B Schenker and ironically had them fully overhauled by that concern at Toton for use pretty much all over the country.Re-introduced in late July-2014
Another 10 are possibly to follow? 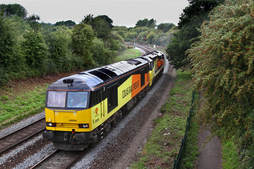 Colas operated 'Tug' 60056 the former 'William Beveridge' passes Ladydown in Trowbridge making a rare visit to Westbury dragging 70816 on the '0F75' the 10:00 from Cardiff Canton to Westbury Down-TC presumably to be added to the Westbury Base allocation.Within an hour or so it had returned towards Cardiff Canton taking with another GE-70801 back with it. 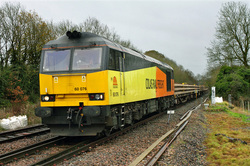 Yet another 1600asa shot to break up the incredibly dull and damp sunday!  Here is an Engineer's-'7C21' with Colas 60076 returning to Westbury from Largin in Cornwall (Booked 09:00 off but actually departed about 60 minutes late). It is seen at Blatchbridge-Junction nr Frome with its train of recovered scrap track-panels. 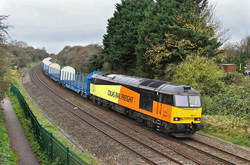 This morning this 'STP' working '6Z60' popped up on the system and word quickly spread it was a Colas wagon move using a Class-60.It was due to depart Eastleigh-Arlington for Cardiff-Canton at 07:31.It eventually got on the move at about 10:30. So here is 60047,one of Colas's latest 60's with eight bogie log wagons in tow passing Ladydown nr Trowbridge.The wagons looked to be fairly new and I presume they had been in warm-store at Eastleigh Works prior to the call to S-Wales. 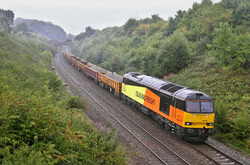 Yes I know it is a fairly desperate shot requiring the use of 800-asa but a solo-60 on any kind of freight these days through Frome is a pretty rare event so it had to be attempted at least!.Here is Colas's 60096 with '6C25' the 10:28 away from Westbury going to an engineering occupation at Par in Cornwall.It is seen (just) through the pouring rain and low light passing Clink nr Frome. 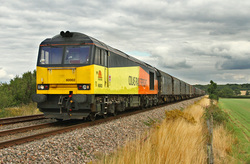 Colas-60002 thuds through Hullavington with '6V62' the 11:20 from Tilbury-Riverside to Llanwern-Sidings. 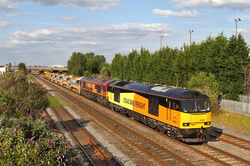 Recently re-introduced Colas-60096 having gone back to Toton for a spot of warranty-repair is seen on '6X45' the 17:20 from Toton-TMD to Bescot.This would appear to be a test run to check that the repair work was satisfactory.GM-66221 going along for the ride as insurance.The load was made up of HQA's and a set of Points-n-Switch Carriers,hence the 'X' classification.Here it is seen coming out of the loop at Burton-on-Trent heading south. 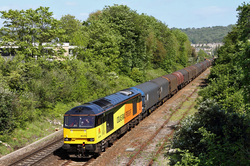 After the mild excitement in the middle of last week when a pair of 56's did the job today it was back to normal in the form of a Colas-60 for '6V62' the 11:20 from Tilbury-Riverside heading for Llanwern Exchange Sidings.This is another train that has had to come via the B&H and the Limpley Stoke Valley due to engineering work on the normal route via Didcot.  So here is a pretty smart looking Colas-60076 c/w a friendly driver with yet more empty steel carriers chugging past Oldfield Park in Bath.3 panels lit instead of the fabled 2 on the front end but hey! the sun was shining so musn't grumble! 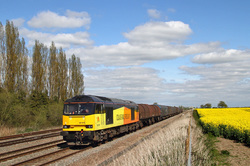 This working '6V62' the 10:44 from Tilbury-Riverside to Llanwern is another one that allows you to go for a 2nd bite at the cherry if required after passing Circourt Bridge.Naturally I went for it and after a swift drive down the lanes and then a stumble up the Oil Seed Rape Field managed this extra effort.So here is Colas-Tug 60076 sitting waiting time in Challow Loop.I allowed the driver to finish his pee against the bogie before doing to shot as it was obviously not going to be moving off for a few minutes! 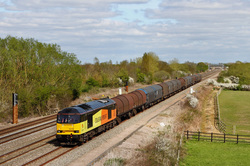 The now regular Steel empties the 10:44 from Tilbury-Riverside to Llanwern Exchange Sidings '6V62' operated by Colas passes Denchworth with Schenker cast-off 60076 in charge. 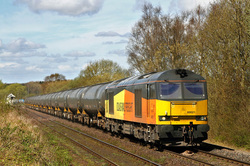 Colas 60021 looking pretty workstained passes Elsham with '6E32' the 08:40 from Preston Docks going to Lindsey with discharged Tanks.The Elsham Level Crossing Box is just visible in the background.Note the slain deer between the tracks just in front of the 60.Apart from being dead it didn't look as if it had suffered much in the way of injuries,unlike its partner which was 10 ft further away under 60021.That one was a bit of a mess! 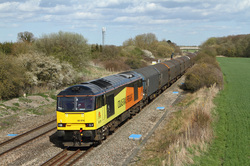 After suffering a bit of a disaster cloud-wise on this working a few days ago on the B&H today was rather more successful! Here is '6V62' which today was running on its normal route passing Shrivenham with gleaming Colas-Tug 60076 in charge.
This train comes from Tilbury-Riverside(departing 11:28) and goes to Llanwern-sidings just through the Severn-Tunnel in Welsh-Wales. 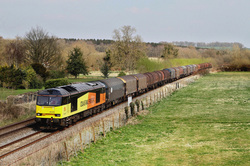 I was not very impressed when after standing in the very warm sunshine for over an hour a very slow moving cloud coincided exactly with a 5 minute period when this working and another with a pair of 59's passed by.Naturally within 30 seconds it was back out into full blig for a further 45 minutes.Grrrrrrrrrrrrrr......Any way here is a fairly comprehensively worked on version of 60076 passing Brimslade nr Wootton-Rivers on the B&H.The train is the diverted '6V62' empty-steel from Tilbury-Riverside (10:44 off) going to Llanwern Sidings.Success rate for picturing this train in proper sunshine is now running at about 20% and currently getting worse! 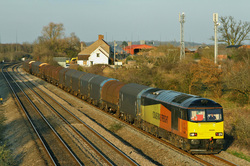 With the sun rapidly approaching the horizon this yellowy shot of '6V62' was obtained at Undy shortly after this Colas empty steel train from Tilbury-Riverside to Llanwern had emerged from out of the welsh portal of the Severn Tunnel.60085 today handled this train,that is three trips this week for this working so business must be looking up! 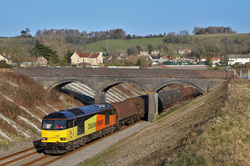 The '6V62' from Tilbury-Riverside (10:56 off) to Llanwern ran again today (Friday) just two days after the last one.This is probably instead of the usual Saturday slot.Here it is with 60085 in Chipping Sodbury cutting shortly after exiting the long tunnel there.Although the time was 16:30 the sun is now sufficiently high in the sky for this location to hang on that vital extra hour or so making these late afternoon freight workings through here now possible to picture in decent light. 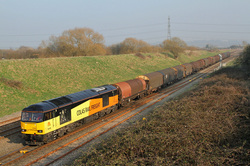 60085,one of the small but slowly increasing in strength Colas fleet of Class-60's dodges the lengthening shadows at Pilning with '6V62' the 10:56 from Tilbury-Riverside (Colas) returning the empty steel carriers to Llanwern. 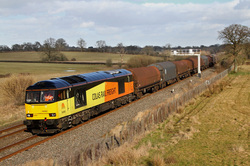 Colas's '6V62' the 10:56 from Tilbury-Riverside heading for Llanwern Exchange Sidings consisting of empty steel coil carriers hauled by a still pretty smart 60085 passes Badminton going west.By some miracle a short burst of sunlight lit the scene out of a seemingly solid grey sky.A kind of payback I suppose for all the time the opposite usually happens when you get humped by the smallest of floaters! 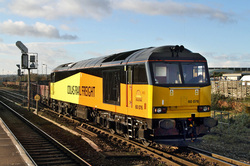 The third Class-60 obtained by Colas from DBS to return to active service was 60076 and is here seen at Westbury busily shunt-releasing 70809 which had arrived just 15 minutes or so earlier.This loco 60076 plus 60085 had earlier arrived after working an engineering train in from Ruscombe east of Reading. 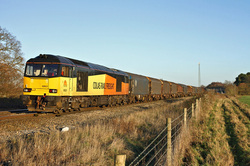 It might have been a struggle getting to this location here at Uffington but at least with clear skies a reasonable result was pretty much guaranteed.Here is Colas-60021 with the new Saturday-favourite target working '6V62' from Tilbury-Riverside (11:20 off) returning empty steel carriers to Llanwern in South-Wales.Earlier in the year reliability/crewing and pathing made this a very 'hit or miss' working to picture.Now it seems to have settled down.Good job as well as sunset is not that far away at this time of year even though its passing time is just 15:00 in the afternoon. 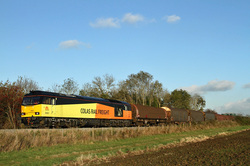 Knowing '6V62' with 60021 was due to stop at the western end of the Challow loop to allow an HST to overtake a chase from Circourt Bridge to Challow was undertaken.After a hurried exchange with the 'Murphy' workers on Challow-Bridge who tried to tell us the footpath going west was closed (which it wasn't) a half mile run up the fields and through hedges produced this picture.  It's 60021 with '6V62' getting on the move again out of Challow loop going to Llanwern from Tilbury.As can be seen the sky was now virtually cloud free.Pity it didn't clear about 3 hours earlier! 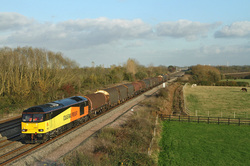 Colas's second Class-60 to be placed into service passes Denchworth with '6V62' from Tilbury heading for Llanwern on empty steel carriers.Not wanting to look a gift-horse in the mouth an additional 'pull-back' shot was certainly required.At least it saves me having to come here again for the wider shot. 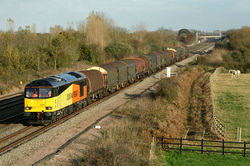 Until about 30 minutes before this working was due any thoughs of a sunny shot were largely fantasy given the seemingly endless clouds over Didcot.However travelling westwards showed there was some hope so a visit to Circourt Bridge nr Denchworth was decided upon.Well sometimes miracles do happen and this working '6V62' the 11:22 from Tilbury-Riverside going to Llanwern actually appeared right on cue.The icing on the cake was the loco was the 'other' Colas-Tug 60021 which was still looking fairly presentable.Suddenly the day didn't seem so bad! 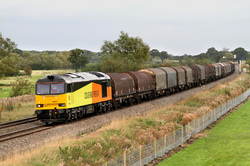 No sun for this shot but included purely because it was Colas's second resurrected Class-60's first duty in the south of the Country. Here is 60021 hauling the now regular '6V62' from Tilbury to Llanwern passing Shrivenham.A slight telephoto shot is necessary here as the first OHLE mast foundation-post is now in position just out of shot to the left.Amazingly with about 20 feet of it still above ground.Presumably the German-Windhoff-Machine didn't have enough grunt to hammer it in any further,so it was left until later!!!!!!! 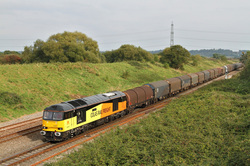 After 'Plan-A' going to Chipping Sodbury Failed! Plan-B at Shrivenham came up with a successful picture.Inspired by that, Plan-C was put into action and the chase was on back to Chipping Sodbury (Assuming it stopped in Hullavington Loop as booked).Naturally it didn't so with no time available to get there Plan-D was to beat it to Pilning a mere 50 miles from Shrivenham.Well that plan worked and to top it off it was fairly sunny there as well! So here is 60087 with '6V62' speeding non-stop past Pilning heading for Llanwern from Tilbury. Colas Tug's and 56's on Wednesdays and Saturdays is all very nice but they certainly cause changes of plan all the time! 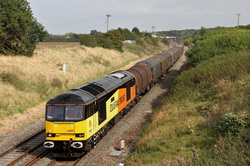 The somewhat elusive (In the sun anyway) 60087 was again nailed today at Stepping Stone Lane just west of Shrivenham.On a pretty cloudy and dull day a lucky break produced a fairly bright patch of blue and sunshine.Here is '6V62' the 11:20 from Tilbury-Riverside heading for Llanwern Exchange Sidings with the sole Colas Class-60 to date to operate on the Network.Original plan was Chipping Sodbury but that was an obvious non-starter.Sometimes Mark Few's Headless Chicken Mode does actually pay off! 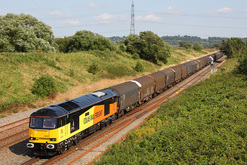 This I suppose is the main shot of '6V62' at Pilning grabbed a few seconds after the one shown below.It certainly shows up to good effect the superb condition of the still immaculate 60087 c/w its new name 'CLIC Sargent' This working from Tilbury-Riverside going to Llanwern comprises of a long train of SNCF-SWB bogie 'IHA-s' albeit empty on this return leg to South-Wales.No doubt once this machine has settled down after its long lay-off and recent rebuild it will be on this duty many times.At least the pressure is off now a decent shot of it ex-works is in the bag! 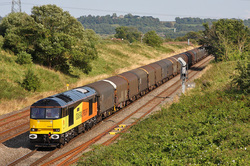 Having stood here 2 weeks ago in full sun waiting for this locomotive to appear on the same working only to find it had failed at Hullavington and the failed shot at Bourton just over an hour before I finally bagged 60087 'CLIC Sargent' on '6V62' the 11:22 from Tilbury-Riverside going to Llanwern here at Pilning.No doubt I will see it many times in the future but the first shot is always the most satisfying.