Derby Lightweight DMU-sets built in 1958/61 and lasting until 1993 in mainline service.About two dozen sets remain in preservation scattered around the country. 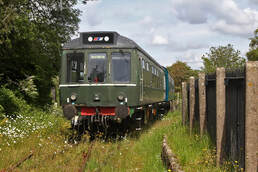 Class-108 Derby Lightweight M51909 sits amongst the buttercups and daisies in the sidings at Cranmore on the East Somerset Railway.The sun was shining and as I was passing a quick visit was partaken in just to see 'whats-what' was going on there.Its partner just visible M56271 has actually been nicely repainted into BR-Blue since my last visit but sadly not in a position for a picture to be taken.Despite the look of this DMU it is actually in full working order and runs very regularly. 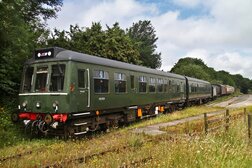 It may look a little careworm but this 1st Generation DMU Class-108 Derby Lightweight M51909/M56271 is actually in full working order and available for use if required.Here it is parked in the old long closed Bitumen Sidings at Cranmore that is now used for occasional stock storage and receiving stock being delivered here or leaving by road transport. 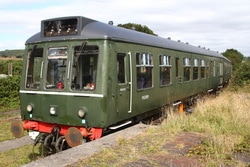 Despite looking decidedly careworn and tatty this old Class-108 Derby-
Lightweight DMU-twin is actually in full working order.Numbered                 M51909 and M56271 (L231) it was parked at the cattle-dock in the
​    bitumen sidings here at Cranmore on the East-Somerset Railway.With its
drop-windows left open to the elements and the partially dismantled route
indicator box and dull paintwork it certainly needs a bit of TLC! 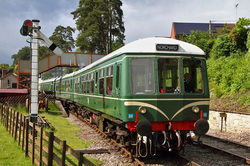 Derby built Class-108 DMU M51566/59387/E50619 gets away from Parkend with the 16:25 to Norchard-High Level.This being the final working of the day and luckily in a spot of nice sun as well.This is my first visit to this preserved line here at the Dean Forest Railway.There seems plenty of scope for a few  quite nice shots at various locations along this line...As the majority of main-lines are slowly getting ruined by fencing,vegetation and unnecessary electrification etc places like this are beginning to seem quite attractive! 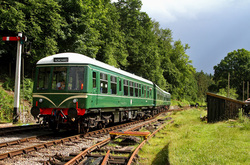 Derby built Class-108 DMU  E50619/59387/M51566 is seen arriving at Parkend with the 15:50 from Norchard-High Level.This Unit was doing the Norchard to Parkend Shuttles whilst Trains from Lydney only went as far as Norchard-Low Level. 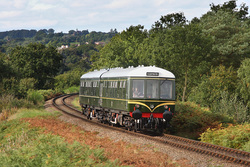 A few minutes behind the 'Western' was the local service from Bewdley going to Kidderminster (11:56 off).The resident Class-108 currently working as a 'power-twin' with 50933 leading and 52064 behind.It has to be said the smell of the exhaust of this pair was distinctly unhealthy and at times the exhaust smoke was very bad.Also it had very bad wheel flats! 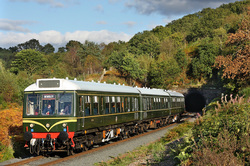 At Last! A decent picture of the Class-108 51941/59250/52064 in pretty much perfect light.Here seen exiting Foley Park Tunnel into the open fields that preceed the arrival at its destination Bewdley.
An excellent example of 1st generation DMU preservation. 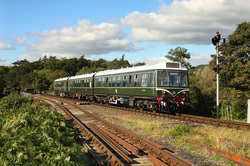 Up until this shot the resident Class-108 had eluded me as everytime it passed the sun was hiding in the clouds.Finally it passed on the 14:48 from Kidderminster to Bewdley.The DMU-Class 108 comprised of 51941/52064 with trailer 59250 sandwiched in between.What a superb period piece this is,such a pity they are not really appreciated.The staff here at the SVR are to be congratulated for keeping this unit so well up together. This location is the neck of the derelict yard at Bewdley-South where a long lifted line to Stourport used to diverge.