Various types in use here.Mostly underground but occasionally seen on the surface at various locations. 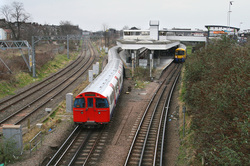 Underground meets Overground here at Willesden-Junction and actually uses the same tracks as well.Tube-Unit 3546 is seen arriving at the station here in Willesden whilst Overground 378217 pauses to pick up a few passengers. 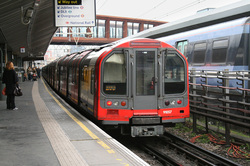 Tube-Stock No 91057 stands at Stratford Station on the Central-Line.This dedicated 'tube' platform is right in the middle of all the mainline one's there. 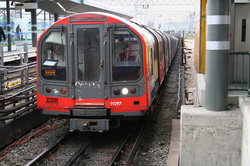 Jubilee-Line 91297 comes up to the surface for some air on the approach to Stratford Mainline Station on the Central-Line heading East. 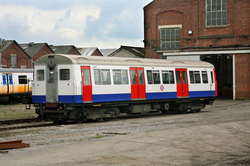 Its hard to believe but this rather smart looking London-Transport Tube Driving-Trailer number 5057 is actually here at Eastleigh-Works for breaking up into spares and (or) scrap.New Tube-Stock is now being delivered regularly meaning the older units have to go and this place accepts several sets a week delivered by road for scrap recovery.Viewed through the spiky fencing on the road past the Works. 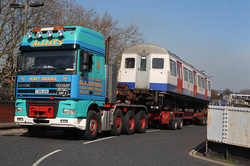 Two minutes behind the Transporter carrying Tube-Stock number 5068 was another Transporter this time with Coach 6068 on also going to the Works for parts recovery and oblivion. The 2 man crew negotiated this tight double right-angle bridge in barely a few minutes.One man was walking behind operating a remote control keypad that was steering the rear truck of this multi-wheeled trailer. Very expertly done! Location is Campbell Road Railway Bridge at Eastleigh. 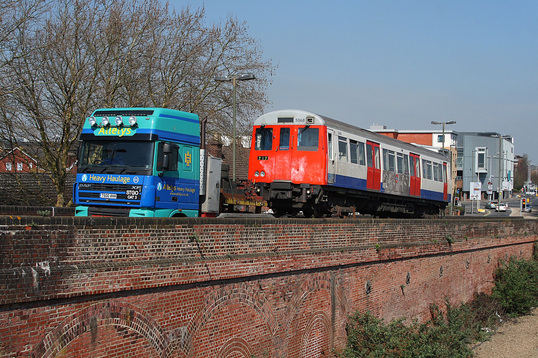 Whilst waiting around at Campbell Road nr Eastleigh-Works this Allelys Transporter arrived heading for the Works.The load being a London-Transport Tube-Train Driving Trailer.Its number was 5068 and apparantly is going into the shops here to be stripped out and scrapped.At least it final journey was in the sunshine after a life of living in the dark. RIP.