Early 25kVa EMU type now extinct on the National network.Originally worked on the WCML but ended their career on the Fenchurch St to Shoeburyness Route. 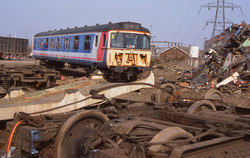 These 'AM10' units were used originally on the WCML but gravitated to the 'London Tilbury& Southend Rly' between London-Fenchurch Street and Shoeburyness.All were oos by 2002 and most were disposed of by Booth's at Rotherham.However this one 310089 ended up at Simms-Metals at Splott in Cardiff.It is not yet shorn of its bogies the bodyshell still looks remarkably intact.That situation of coarse would not remain for very long,almost certainly reduced to tiny pieces within a few days.