These Network Turbostars work for several TOC's ranging from London-Overground to Chiltern-Railways.Constructed fron 2010 onwards,there are about 50  sets in service as of 2013. 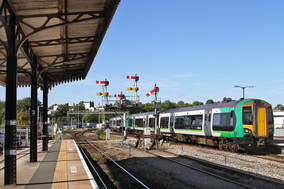 Just 11 minutes after its arrival from Great Malvern (15:21 off) this working to Whitlocks End continues on its way north at Worcester Shrub Hill.Midland 3-car 172211 being the stock. Note all the lower-quadrant signals amazingly still retain their finials on the post-tops! 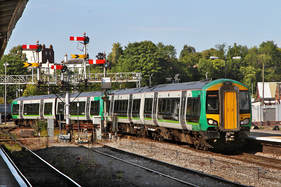 172211 threads its way across the semaphore controlled junction at the northern end of Worcester Shrub Hill Station with '2S62' the 15:21 from Great Malvern going to Whitlocks End.The set reverses here to continue its journey towards Birmingham. 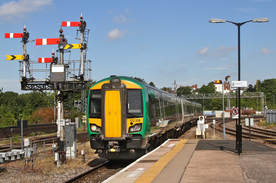 '2V18' the 10:19 from Whitlocks End runs into its service termination destination Worcester-Shrub Hill past the iconic semaphore bracket signal gantry that dominates the station here.'Midland' 172338 was doing the service.This is yet another 'TOC' that has been shafted by the system and ceases to exist from the end of 2017.Oh-well another tasteless livery (West Midland Trains) to look forward too I suppose ! 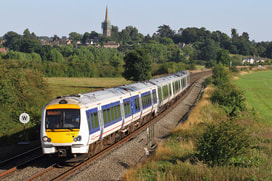 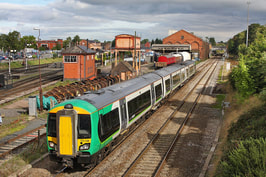 With a lull in the proceeding on the SVR a chance was taken to picture  172338 here working '5S34' from Kidderminster to Kidderminster via the 'run round sidings just 400 yards away.Upon return to the station it would form '2S34' from here going to Whitlocks-End' in Birmingham at 11:26. 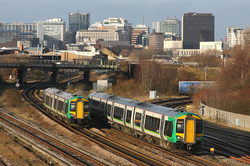 A pair of London-Midland's newish Class-172/3 Units pass at Bordesley.172343 doing the 11:56 from Kidderminster going to Dorridge whilst 172213 going the other way was on the 11:28 from Dorridge going only as far as Stourbridge-Junction.Once again Birmingham City-Centre forms the backdrop. 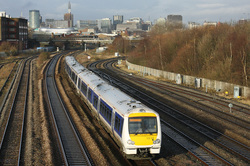 Chiltern-Railways 172102 passes Bordesley-Junction in deepest Birmingham with the 09:26 from Kidderminster going to London-Marylebone.As I do not venture up this way very often this shot with its backdrop of the famous  City-Centre Skyline was required.Oh yes and you need a good set of steps as this bridge is over 7ft high to the parapet!