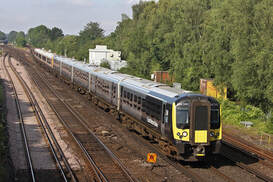 444040 has been reliveried into 'South Western Railway' livery now for nearly 2 years.This Mk-1 version done in vinyl has been superceeded by a 'cheapo' repaint version as seen on Class-442's and 158/159's.To date only one other Class-444 has gotten the new colours (I think).  So here is 444040 paired with 444032 still in SWT colours operating '1T26' the 07:55 from Portsmouth Harbour to Waterloo.Viewed at Worting Junction nr Basingstoke. 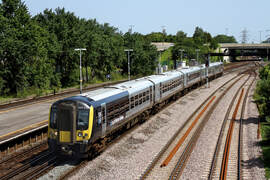 444040,the first '444' to get the new SWT livery that incidentally has been subsequently modified (simplified) passes through Millbrook in Southampton working '2B35' the 12:39 from Waterloo going down to Poole.It does now carry a 'cheapo' vinyl nameplate 'The D-day Story'. 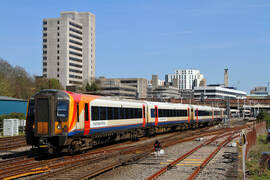 EMU-444020 runs away from Southampton-central with '1W67' thr 13:05 from London-Waterloo goingdown to Weymouth.
No apologies for picturing these quite bland EMU's particularly in such excellent lighting conditions we do not really experience in this country very often! 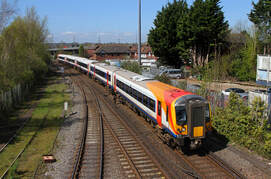 EMU-444045 runs non-stop through Redbridge with '1W58' the 11:20 from Weymouth going up to London-Waterloo.Note this particular Unit still wears the 'South-West Trains' branding whilst the majority now wear 'cheapo' South-Western Railway stickers! 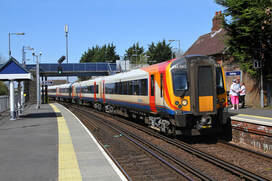 'South-West Trains' stickered 444042 glides through Redbridge Station non-stop with '1W16' the 11:03 away from Weymouth going up to Waterloo.The passengers on this platform were waiting for the local Romsey to Salisbury Shuttle service that arrived within 5 minutes of this service passing.All very slick! 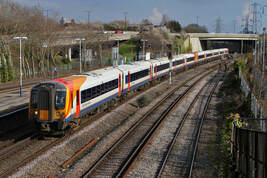 Class-444 pairing of 030 & 043 work through Millbrook bound for Weymouth with '1W27' the 13:35 from London-Waterloo.The lead Unit now bearing a 'quickie' branding sticker for 'South Western Railway'.Apparantly the previous operator SWT has thrown a wobbly and insisted that their old branding is removed from the fleet ASAP,hence the 'cheapo' rebranding with plastic stickers. 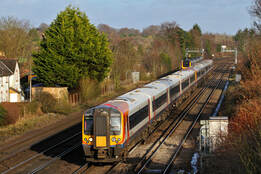 '1W27' comprising of 444026 & 444039 runs past Worting west of Basingstoke with its train from London-Waterloo going to the end of the line at Weymouth.No sign of any rebranding from SW-Trains to South Western Railways on the half a dozen or so units of various classes seen passing here.By now at 14:30 the shadows were getting quite difficult and with no freight due within the next 90 minutesplus it was freezing cold a halt was called as hot coffee and home seemed the much better option! 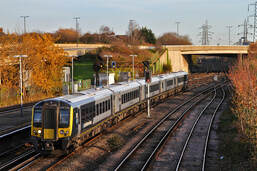 The first reliveried EMU in the new franchisee's fleet for 'South Western Railway' was 444040.Here it is pictured passing through Millbrook nr Southampton amid lengthening shadows working '1W67' the 13:05 from Waterloo heading for Weymouth.Not too sure about this colour-scheme,the dark-ends are just a little bit too much me-thinks???????? 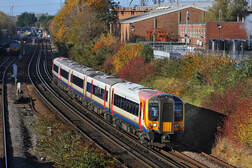 SWT liveried 444014 passes the vivid autumnal colours adjacent the Freightliner-Maritime Mtce Depot.It is on the 11:50 from Poole heading for London-Waterloo as '2B44'. 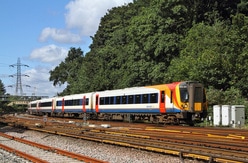 Desiro-444011 swings round the curve on the approach to Southampton-
Central on '1W56' the 10:20 from Weymouth up to the capital at Waterloo. 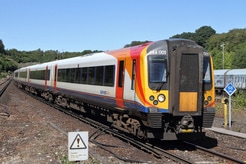 444001,the numerical first of many DEMU's of this type that infest this             stretch of line out of Waterloo to Weymouth speeds through Micheldever
north of Winchester. It was operating 1W27' the 13:35 from Waterloo
going to the end of the line at Weymouth.Note the sidings in the
background are used fpr storage of oos WIA articulated car carriers.
altogether there were three sets of five stored there,all pretty well
grafitti'd up and looking pretty careworn. 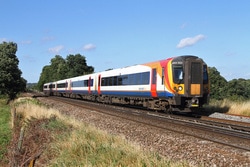 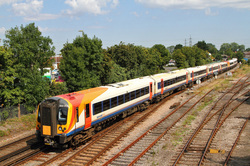 This is actually an ECS working '5Z10' from Basingstoke going down to Bournemouth. EMU's-444013/444002 making up the 10-car consist.Here seen passing Totton-Yard which until recently was the home of the 'Rail-Vac' and a selection of barrier-wagons.Currently the rails are getting dull again and the sidings are looking rather empty? 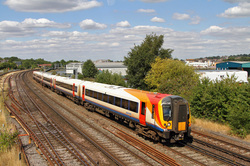 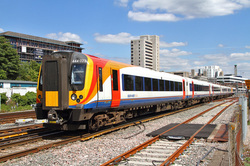 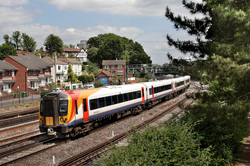 444042 gets away from Southampton-Central with the 12:39 stopper service from London-Waterloo going all the way to Poole as '2B35'. 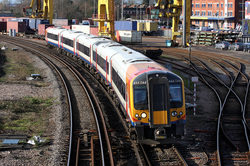 The almost palindromic but not quite 444044 leans into the curve past Millbrook-FLT in Southampton with the 12:03 from Weymouth '1W18' heading for London-Waterloo. These Siemens built 5-car sets (45 in total) are the most reliable trains in the country with a reliability record of over 89000-km per technical delay.Pretty impressive for a metal-tube with seats in! 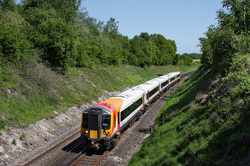 '1T25',the 10:09 Waterloo to Portsmouth via Eastleigh passes Popham nr Micheldover. 444001, the initial member of the Class-444 Desiro fleet numbering 45 examples was working the train.These trains were recently awarded  the 'Golden-Spanner 2010' by a National Railway Magazine for setting a new reliability record of 89000 km-per-techichal delay.Very impressive! 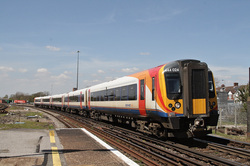 444024 glides almost silently through Millbrook with '1W58',the 11:20 from Weymouth going to London-Waterloo.These Units are quite difficult to photograph due to the predominant white livery .This has a habit of washing out completely if exposure is slightly off! 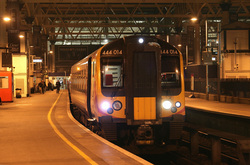 With its lights blazing 444014 prepares to depart Waterloo with the 19:09 to Portsmouth Harbour. 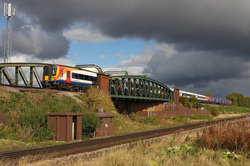 Led by 450024 with 440018 on the rear the 11:03 from Weymouth flies over the Battledown-Flyover heading for Waterloo.
The purpose of our visit here today was a quadruple header engineering working using GBrF-73's from Tonbridge to Eastleigh. Naturally it was running late due to locomotive problems and before it arrived here the heavens opened giving me a good soaking and then the cloud cover ruined the expected picture.
To see 'what might have been' click HERE. 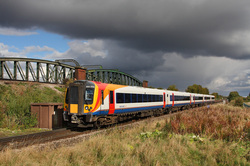 The 12:05 from Waterloo going to Weymouth brightens up a dramatic scene at Battledown nr Worting-Junction.444024 in the extreemly bright SWT livery being the subject. 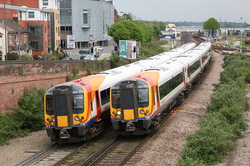 Two Class 444's 5-cars pass at speed through Eastleigh. 444005 was going north heading for London-Waterloo whilst 444033 was going to Poole.Its about time Network-Rail sorted out the rapant Buddleia-Bushes here or pretty soon it will become a Forest! 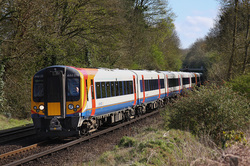 Although somewhat backlit the picture was still just about worth having! Here Desiro 444016 heads towards the Capital slowing at St-Cross ready for its booked stop at Winchester.'1W24' is the 15:03 off Weymouth.These service trains to Weymouth are set to be very very busy later in the summer when the Olympic events planned for that area get under way. 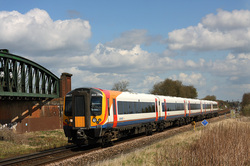 The 12:05 Waterloo to Weymouth speeds past Worting-Junction,444009 doing the business.A new 'Sustrans' cyclepath now runs from the mainroad about 1/2 a mile away all down the field past this location.Good thing is you do not get wet feet anymore in unclement weather,bad thing is the endless inevitable question 'Is there a Steam-Train coming? Grrrrrrrrrrr. 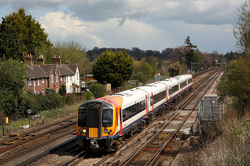 The 11:35 from Waterloo to Weymouth rattles the windows in the cottages next to Worting-Junction.5-car DEMU 444027,a Siemans-built Desiro performing the duty.These SWT white liveried 444's are a nightmare to picture due to the brightness of the main bodyshell.Often resulting in a washed out subject.Probably best pictured in the pouring rain or at night! 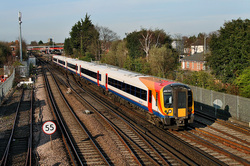 Table-28 service departing from London-Waterloo at 14:39 passes St Deny's
going to Weymouth.These bright-white 3rd-rail Units are difficult to photograph as the high contrast of the body often washes out leaving virtually no detail whatsoever. 444017 was operating this train today. 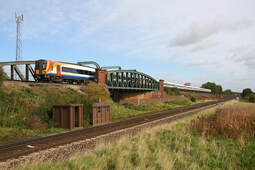 444 032 brings up the rear of a 10-car formation heading towards London over the Worting Flyover. A good development has been the painting out of all the ugly graffiti that once covered the brickwork here as well as those two old gangers huts in the foreground.Then what happens? Yet another of those over engineered radio masts gets sited right next to the structure!!!! 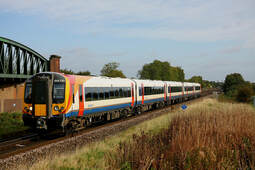 444 041 speeds past Worting with the 09:05 off Waterloo stopping service going all the way to Weymouth.