These Single Unit 'Bubblecars' are still maintaining a foothold on the network with Chiltern-Railways plus many in preservation. 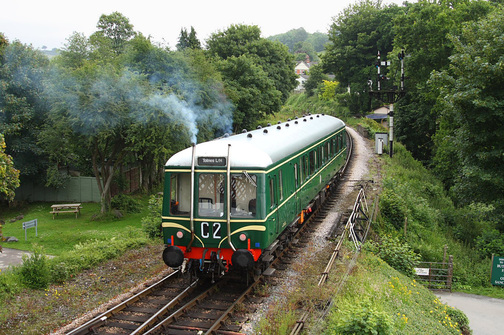 W55000 again, this time approaching Buckfastleigh.A nice preserved line this with very good facilities and well thought out access to the stabled locomotives and stock around the site...................... 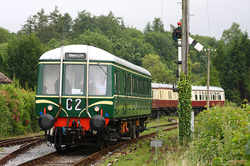 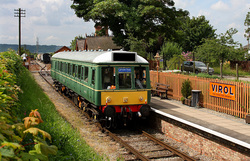 1960 built W55033 'Bubblecar' stands in the superbly crafted rebuilt Chinnor  Station platform about to depart with a service to Thame-Junction,a distance of three and a half miles.The C&PRRly is located in deepest Buckinghamshire.
Click HERE to investigate the C&PRRly further. 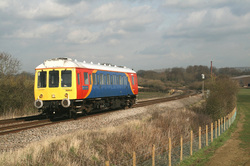 Class 121 'Bubble' 960012 named 'John Cameron' passes Witham-Friary heading for Yeovil during a route-learning duty from Salisbury.This is to gain route knowledge for the crews using 159's on the Waterloo-Exeter services in case of diversions etc.This machine has now passed into preservation and is now on the Mid-Hants Rly. Now restored in Green as W55028. 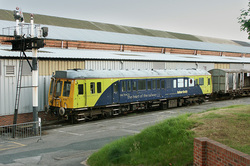 Class 121 formally W55025 but now renumberd as 960011 stands in the Railtrack Depot in Leeman Road York.This 'Bubblecar' had been adapted as a video track-recorder and is seen in the then current Railtrack livery of Lime-Green and Blue. It is still in existence in 2012 but has been stored for some considerable time.A few years later it was named as 'Pandora'. 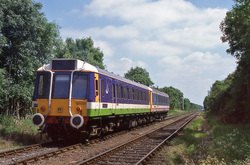 Knowing I probably would not be coming back to this line again a 'Going Away Shot' was deemed necessary as well.So this time its 121027 'Bletchley-TMD' on the rear with 121031 leading away from Woburn Sands going towards Bedford from Bletchley.121027 wearing the colours of  'Silverlink' who run this service whilst 121031 had 'NSE' livery.In 2014 both Units are still around having lasted here until 2002 .After that they were used (Or not used!) as the SevernTunnel Emergency Vehicles (960302/960303) being parked for years on end at Severn Tunnel Junction in a Palisade Compound. Both now at the barry Steam Railway where the plan is to make one good 'Bubble' out of the pair. 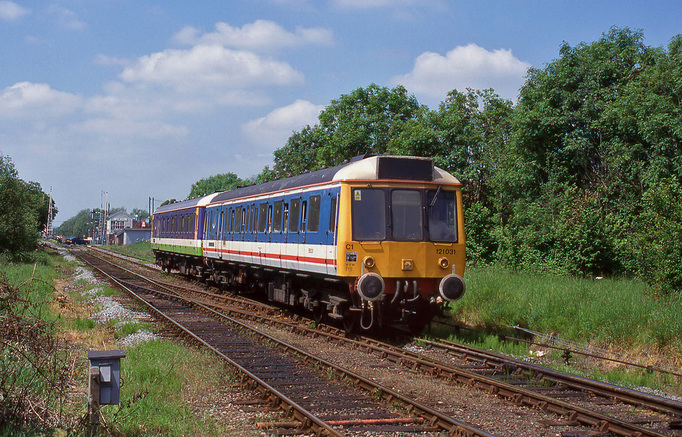 Way back just before the turn of the century a trip was made to the then very rundown and picturesque 'Marston-Vale' Line running from Bletchley over to Bedford.We were after the recent introduction of Fragonset 'TnT' 31's but also saw these Class-121 DMU's as well.Here is 121031 named 'Leslie Crabbe' in tandem with 121027 'Bletchley-TMD' seen departing Woburn Sands with a service from Bletchley to Bedford.This whole line was all very 50's with semaphore signalling,bullhead track on wooden sleepers and sleepy old stations.Sadly the whole line was modernised a few years later and now its just another Railtrack featureless prison!