Same Company (First) just didn't know what to call itself for a few years!.Is the largest operator of HST's in the country. 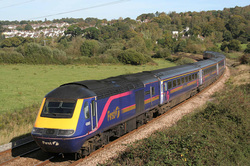 One half of the original production prototype 253001,43003 now named 'Isambard Kingdom Brunel' in the 2nd version of 'Barbie' livery runs away from Aller-Junction west of Newton-Abbot with a Plymouth bound Express. 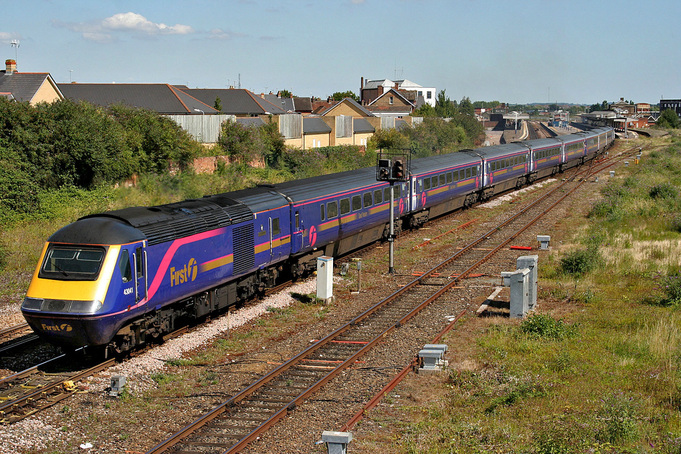 A full 'Barbie' FGW-set departs from Taunton heading west on a hot summer saturday afternoon.The actually working alludes me but of interest is the leading Powercar 43041 which less than three years later on 10th July 2010 suffered a major collision with a fallen lineside tree near Lavington that substantually destroyed the cab area.It eventually returned to service after a prolonged visit to Brush at Loughborough. To see the damage inflicted by that collision click HERE 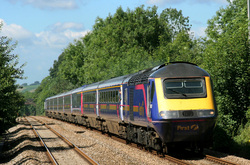 Barbie Mk-2 liveried 43063 powers over the top of Bruton-Bank with a Paddington bound Express.Seen in the avenue of bushes on the approach to Bruton Station.Note the 'Squiggly-Lines' current-coloured Buffet in the Set! 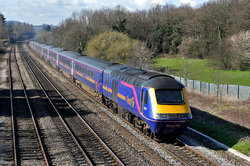 'First' operated 43010 in 'barbie' attire runs slowly past Hatherley Road footbridge on the approach to Cheltenham-Spa Station.This working was an 'extra' from Paddington to Cheltenham (I think it was '1Z33' the 09:03 off Paddington) bringing passengers from the Capital to the Cheltenham-Gold Cup Horse Race Meeting being held over several days that particular week. 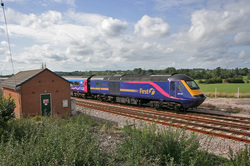 43137 'Newton Abbot 150' wearing the short-lived 'Barbie' style livery runs over Fairwood-Junction nr Westbury with '1A85' the 12:56 from Plymouth going to Paddington.Of interest is the coach behind 43137.This was liveried in the FGW style similar to the Class-180s on the 'First-Trans Pennine Express' around Manchester.'First' HST-P/C's 43004 and 43009 were also in that style when MTU modified.A pity it was not proceeded with and the plain blue styling we have been afflicted with for the last 10 years was adopted instead.
However even that is far better than the sludge-green livery that is the latest attempt at a corporate image statement. 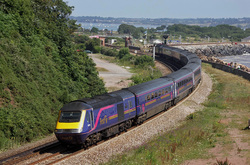 43179 'Pride of Laira' swings past Langstone-Rock during the short period when it carried 'barbie' colours heading for Plymouth with a service from Paddington.I actually preferred the original incarnation with the white front-end but even this all-blue version was way superior to the plain FGW blue 'squiggly lines' effort that followed and 10 years later still rules the rails on the newly renamed GWR-Franchise.