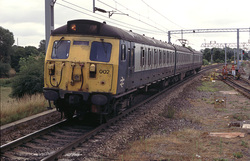 25kVa EMU-304002 pulls away from Norton-Bridge with a Manchester to Birmingham stopping service.This particular unit was the last one in service and rans the final farewell workings just over 6 months later in March 1996.