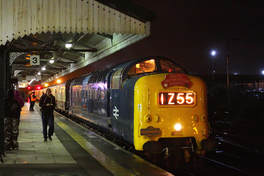 This is the returning Railtour operated by Pathfinder Tours from Burton on Trent to Swanage.The return train '1Z55' departed nominally at 15:08 right-time but by the time the Deltic D9009 arrived at Wareham was over 40 minutes late.It was still that late when it stopped here at Westbury Station for a crew change.Photography here was quite difficult with all the scrabbling idiots getting in the way waving 'wide-angle mobile phones about at arms length with no respect for people with tripods-etc set up!.This idea I quickly abandoned and made do with 'hand-held' dodging the numpties using 6400-iso and  25th/sec with my EOS 35mm-F2 lens wide open. Limited success really but this was the best that could be done under                                                                               the wet scrum-like circumstances. 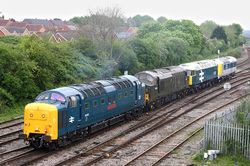 Here is the convoy of locomotives going to Swanage for use in next weekends Diesel Gala there.It was running as '0Z56' from Kidderminster (SVR) to Swanage. Haulage being provided by the NRM's 55002 towing D6700,47292 and the prototype HST Power-Car 41001.Although the working was booked to halt at Westbury for about 60 minutes it motored straight through thus preventing a second shot south of Warminster--A pity. 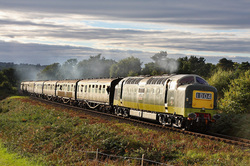 After the passing of D6700 at 14:15 the cloud cover was by now approaching 95% so there was little incentive to move to another location as the results would have been predicably indifferent so it was decided to stick it out here and take our chances.Well nowt appeared worthy of inclusion until over 3 hours later when a brief flash of low sun produced this glinty type shot of D9009 on the 16:06 Bridgenorth to Kidderminster service.As it was now past 17:30 with no hope of any lighting improvement that was that.A somewhat different outcome to last years sundrenched event but you can't win 'em all!
..05 october 2013.. 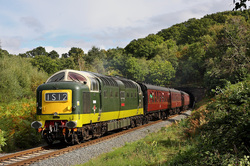 The mighty 2-tone green Deltic D9009 'Alycidon' exits Foley Park Tunnel with the 12:59 from Kidderminster going to Bridgenorth.At last an 'on the nose' shot.I was beginning to think any chance of a sunshot here was slipping away! 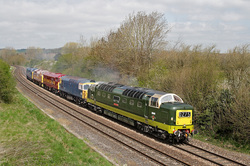 Not quite the shot it should have been.As usual the vagaries of '0Z++' type workings dictated that this one was running substantially ahead of its booked time therefore my chosen location to picture it was still rather head-on for the sun when it arrived.Actually I was lucky to get any sunshine anyway as the cloud cover was about 85%. So here is '0Z75' with D9009 dragging 33108/31466/37521 and 55019 past Sherrington in the Wylye-Valley coming from Lydney (Pick up of 31466) and going down to Swanage for next weeks upcoming Diesel-Gala.At least it ran several days earlier than last years effort whick due to failures was cancelled altogether leaving the Gala at Swanage badly down of Traction. 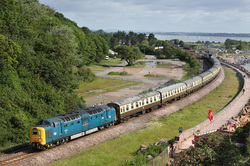 A 2nd shot of the iconic Deltic 55022 passing Langstone-Rock at Dawlish had to be had.'1Z55' looking superb as it rounds the curve here on the famous 'Sea-wall' section of the WR mainline going to Penzance. 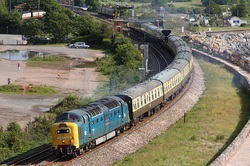 The nicely work-stained Deltic 55022 hums round Langstone-Rock with 'The Mazey Day Cornishman' railtour organised by  Pathfinder-Tours.This one departed from Birmingham-International at 05:18 and was running about 15 minutes early here at Dawlish when it passed at 09:27.A good load on this train,a total of 13 carriages.Way more than you see these days on the usual fare that passes this way. 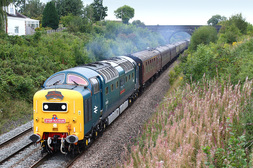 As usual when a decent piece of traction appears down my way the sun refuses to co-operate.Original plan was to follow it down country for a couple more shots but all this was negated by the shite-lite.Anyway here is D9000 aka 55022 speeding down the Frome Avoider bang on time running hard on both engines with '1Z75' from Crewe going to Weymouth.What a superb piece of sixties railway engineering! With the passage of time even BR-Blue looks really good!
..03 september 2011.. 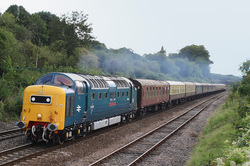 The 16:47 from Weston-Super-Mare' returning to Peterborough running as '1Z06' eventually appeared at Bathampton some 20 minutes or so down on time.No problem with the Deltic 55022,just a late departure from WSM. Here seen powering by the Loop at Bathampton under full power from both engines.Nice touch was the lack of any sort of gimmicky headboard!
..20 august 2011.. 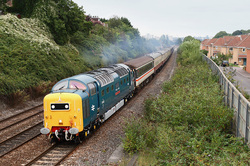 I knew the light would be dire for the passing of this 'Icon' but it had to be done.Real Celebrity Power does not come this way too often! Here is 55022 'Royal Scots Grey' gathering speed as it passes the site of the once extensive Carriage-Sidings at Malago-Vale west of Bristol-TM.The working '1Z05' was a staff outing organised by the GBRF-Company coming from Peterborough and destined for Weston-Super-Mare. Wow! what a sight!
..20 august 2011.. 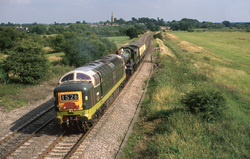 An interesting stock movement comprising D9009 'Alycidon' leading 5051 'Earl Bathurst' up through Kings Sutton south of Banbury.The working was '5Z55' from Didcot going to Barrow Hill.An unexpected surprise this as I saw it earlier at Culham just north of Didcot but assumed it was long gone by the time we arrived here!