These 2-car units work for East-Midlands,Scotrail,Anglia and Northern.They are never seen in the south of the Country  even though with a class total of 114 train-sets is quite large. 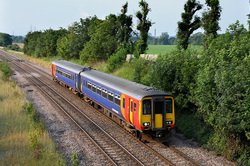 With the promise of newly rebuilt 60019 on test allocated on the Toton to Whitemoor Infrastructure working we duly parked ourselves at Kegworth to await developments.As usual it failed to appear in its proper slot and when it did was just a single-GM,oh yes the sun went in as well!---so a bit of a dead loss really.However I managed a consolation shot of a rarely (for me) pictured East-Midlands Class156 instead. Here is 156406 on '2L72' the 16:34 from Lincoln going to Leicester.In the background somewhat obscured by the trees is the massive Ratcliffe-on-Sour PS. 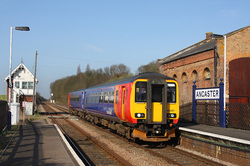 After a refrshing nights stay in Grantham Premier-Inn a short drive took us to Ancaster ready for the classic shot at the station of the Boston-Steel.Whilst we were waiting 156411 in East-Midlands Colours arrived with the 06:55 from Leicester going to Skegness.This station is totally untouched apart from modern lamp standards.Amazing! all wooden fences and even free parking.A real step back in time. 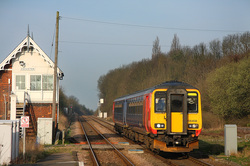 First train of the day to stop here at Ancaster is the 06:33 from Leicester going to Skegness.156408 providing the transportation.What a superb looking piece of old railway infrastructure the Signal-box here is! 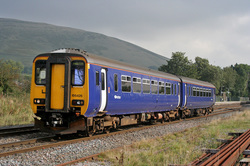 Wearing a rather basic 'Northern' Blue livery 156426 gets away from Edale in the Hope Valley/Peak District with '2S25' the 10:14 from Sheffield going to Manchester-Piccadilly.