This class is a regeared version on the 08. 26 were built in total,some originally as 09's and some converted from 08 later.Several still at work on the national network with many preserved. 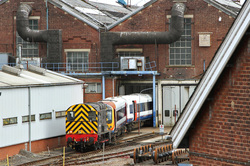 Here is one of the re-geared series of '08' shunters that became an '09'.This particular one 09009 is seen pushing back an EMU 444021 into the Works here at Eastleigh.Built in Darlington in 1959 this 56 year old veteran is still doing the job it was built for! 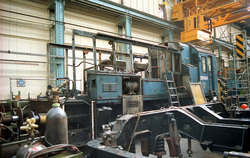 Back in 1992 overhauls and heavy repairs were still done on 08/09 shunters at Mainworks as a matter of coarse.Here is 09004,one of the re-geared versions considered then as a valuable asset.Note the degree of the dismantling. Indication of the expectation of plenty of life left in the engine after return to service.Here it is seen in the depths of Eastleigh Works surrounded by all the kit necessery to undertake a major repair of this level. It survived in BR service until April- 1999 and was eventually preserved.It is now resident on the 'Swindon&Cricklade Rly' in North-Wiltshire.