Small class of 0-6-0 DM introduced originally to replace the USA steam tanks on Southampton Docks.None in service now of the 14 built but 7 still extant either preserved or in Industrial service. 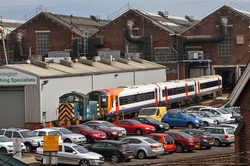 Eastleigh Works 'Pet' 0-6-0 07007 which was originally built to replace USA steam tank engines at work on Southampton Docks back in the early 60's stands parked with 444015 outside the Works in what looks basically now like the Car Park! 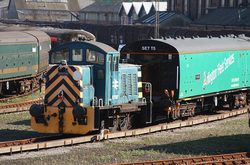 0-6-0DM  07007 stands in the main yard inside Eastleigh-Works.This loco though 'preserved' leads an active life as the works shunter here at the now very busy again workshops. 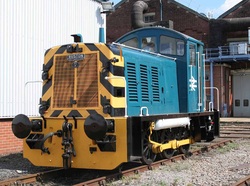 07007 or D2991 in old money stands newly restored at Eastleigh-Works.Numbers yet to be applied by the owners 'Knights-Rail-Services.