Known as 'Thumpers' or 'Hampshire' Units,these 2 or 3-car Diesel Multiple Units worked on Southern Metals on routes not covered by 3rd-rail electrification.Introduced in 1957,they lasted until 2004.Altogether 34 sets were built and many survive in preservation. 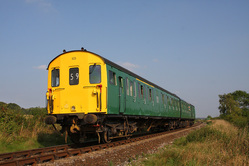 DEMU 'Hampshire Unit' 1125 heads west at Bishops Sutton with the 16:22 from Ropley to Arlesford.This time the 'More Yellow' end was leading.This unit comprises 60670/60824 and is significant to the MH-Rly in that it actually worked trains on the final day of service before it was formally closed by BR. 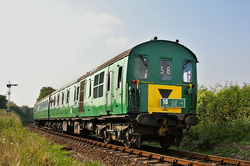 DEMU 'Hampshire-Unit' 1125 thumps past Bishops Sutton with the 15:44 from Arlesford going only as far as Ropley.Again after spending most of the day riding up and down the line,drinking tea or beer it was time to do a bit of linesiding particularly as the sun finally decided to make an appearance in a largely clear sky. 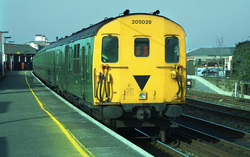 'Thumper' 205029 was given a coat of SR Green towards the end of its life.It is seen here in Platform-6 at Salisbury having just arrived with a stopping service from Basingstoke.Regretfully this unit was involved in the Cowden-'head-on' collision in October 1994,about 18 months later and this motor-coach was destroyed.