A new class of 3800HP Bo-Bo locomotive for the UK constructed by Vossloh in Spain from 2013.19 are now in service (End of 2015) with a further 13 on order.Currently working for DRS/Abellio-ScotRail and Chiltern Rly's 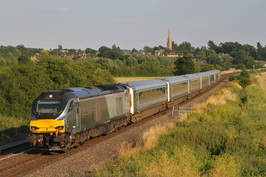 68010 'Oxford Flyer' with its matching set of six coaches plus DVT-82301 runs up through Kings Sutton in the rapidly yellowing evening light with '1K54' the 18:15 from Marylebone to Kidderminster.Hats off to Chiltern-railways for running 'proper' trains on this route giving customers a decent level of comfort and sufficient seating to not be too overcrowded most of the time! 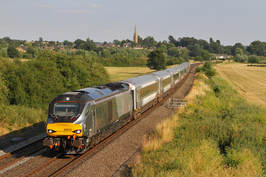 This working here at Kings Sutton is actually an ECS '5U50' from Bicester North going up to Banbury Depot-Reception.Note the coaching stock has a slightly different livery than the previous couple of LCHS's that had already passed this evening and also is an extra coach longer.Loco here is 68012 with 82305-DVT on the back. 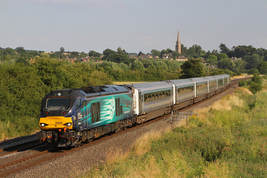 Highlight of the evening here at Kings Sutton is probably the sight of this Blue-DRS 68008 'Avenger' working '1K50' the 17:15 from London-Marylebone to Kidderminster.DVT 82304 being on the capital-end. 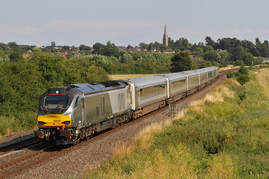 First of tonight's procession of Class-68 hauled workings out of Marylebone through Kings Sutton is '1C45' the 16:15 going to Kidderminster.Silver Chiltern-Railways liveried 68011 doing the business.DVT 82303 being on the London end. 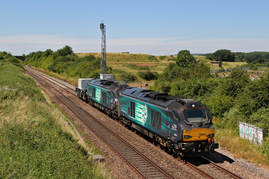 Todays '6M63' the 11:58 from Bridgewater to Crewe-Coal Sdg's was in the hands of 68004 'Rapid' & 68001 'Evolution'.Here seen passing the former government owned but now disused Oil Stogae Depot at Flax Bourton. 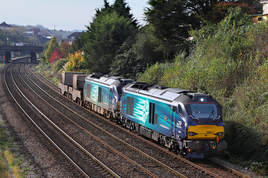 This working was the main incentive to make the trip to Bristol this morning given there was a reasonable change of some bright conditions.   Sadly it seems the days of heritage traction on this working now seems to be a thing of the past with Class-68's now seemingly being on it continuously these days.So here is 68017 'Hornet' with 68016 'Fearless' with just a pair of 'Flask' carriers working as '6M63' the 11:58 from Bridgewater F.D going up to Crewe Coal Sidings.This shot now being even more back-lit than usual here at Parson Street in the western suburbs of Bristol given the change of the clocks back to GMT the previous weekend.
..1 november 2017.. 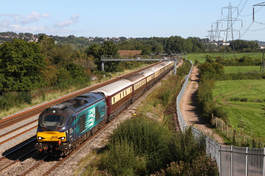 Today a 'Northern-Belle' ran from Paddington to Llandrindod.It was an 07:09 departure from Paddington as '1Z39'.Motive Power today was supplied by a pair of the DRS operated Vossloh UK-Lights.
​68016 'Fearless' led with classmate 68024 'Centaur' on the rear.Seen passing Duffryn on the South-Wales mainline nr Newport. 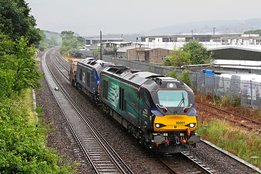 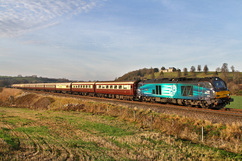 Today a 'Northern-Belle' operated between Cardiff-Central and Swindon as         '1Z12'.DRS today provided a pair of their Blue Class-68's instead of the           now seemingly out-of-favour dedicated Class-47's.68016 'Fearless' was
leading as the train passed over Newton Meadows on the approach to Bath-     Spa.Classmate 68023 'Achilles' being on the rear for operational purposes.
Of note this is my first shot in sunshine of a 'Blue' Class-68 although they
have been in service now for over two years,mainly in the Midlands and the
North apart from the Chiltern-six. 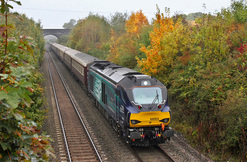 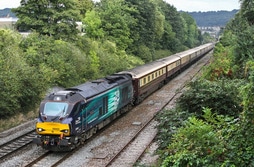 After '1Z52' the 'Northern Belle' has dropped off its passengers at
Bath Spa here it is having just departed there for the final leg to its
destination of Bristol passing Oldfield Park.68002 'Intrepid' now
being the lead locomotive.It had departed Cleethorpes at 07:07 this
morning taking over 5 hours to get here. 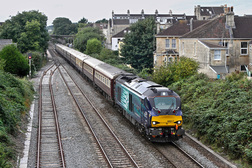 Well it was quite sunny when I left home an hour before this
was due and as Bath is only 15 miles from my home I though
I had a bit of a chance of some brightness.However the cloud
front beat me to it by about 10 minutes hence this dull effort.
Anyway seeing as it is still a rare event to see a 'Northern Belle'
nr Bath with Class-68's on I have presented the shot anyway.
This is 68017 'Hornet' running through Oldfield Park heading for
its Bath Spa stop.Most passengers disembarked here although as
'1Z52' the 07:07 from Cleethorpes,its advised final destination is
actually Bristol-TM. Note the three headlights.I took about 5 shots
as it approached and this was the only one with all three lit.This is
due to the strobe effect of the LED lights coinciding with the
camera shutter or not as the case may be. 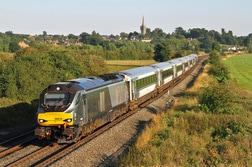 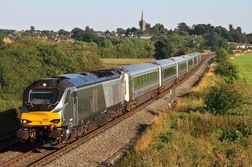 68010 hauls its set of Chiltern Railways 'power-door' modified Mk-3's up
past St Peter & St Paul's Church at Kings Sutton.This working '1K50' is
the 17:15 away from Marylebone going to Kidderminster. This one actually
managed to get there unlike the previous service which was caped at
Leamington Spa. 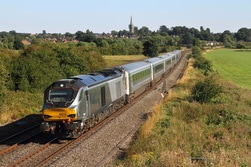 This is my first shot of one of these new Class-68's in sunshine! So here is      Chiltern Railways liveried 68015 heading north at Kings Sutton on the            16:15 from Marylebone supposedly going to Kidderminster but due to a          fatality north of Leamington Spa was terminated there.Its report number        being '1K45'. sadly also due to that same fatality the later Class-68 service      '1K50' to Kidderminster was also cancelled completely! 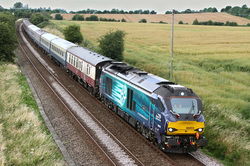 One of the elusive (In the South of England anyway) Class-68's operated by DRS worked a Railtour yesterday from Taunton to Carlisle and back.This is the ECS returning to Eastleigh T&RSMD from Fairwater yard in Taunton (14:38 off).It worked as '5Z72' with 68003 'Astute' working the 13 coach train.This loco fairly flew up the Upton Scudamore Incline with seemingly very little effort. Well it does have 3800bhp available! Pictured in yet more gloom at Arn Hill nr Warminster. 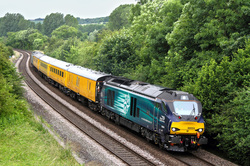 68004 and 68020 swing through the reverse curves at Sherrington in the Wylye-Valley with its NMT-substitute train returning to Salisbury after going to Westbury as '1Q23'.This was my seventh location today chasing this 'first ever' DRS-Class 68 hauled Test-Train in the South of England and thanks to the good old british summer I only saw the sun once.That was at Salisbury when it wasn't needed unbelievably. Oh yes at Wilton as well but we got there a minute after it has passed.Annoyingly that was almost certainly in full light! 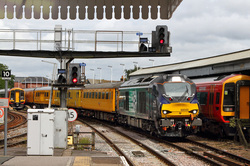 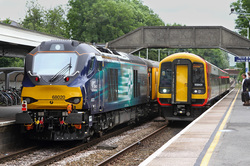 Breaking entirely new ground today was a pair of DRS Class -68's operating a Network Rail Test Train '1Q23' down the SR route to Exeter and return.Here is the rear loco 68020 (68004 was leading) waiting for the road on the single line from this station-Gillingham to Salisbury. 159101 was working '1L29' the 11:20 from Waterloo going to Exeter St Davids. 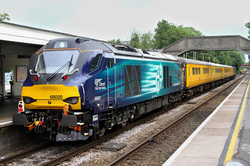 The almost brand new and still immaculate 68020 'Reliance' reposes on the rear o '1Q23' from Exeter back to Salisbury.68004 was leading.The train is awaiting an Exeter St Davids bound service from London Waterloo to clear the single line section here at Gillingham so it can carry on up to Salisbury. 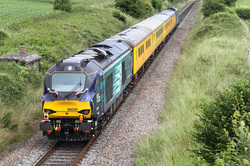 No mistaking the old long disused 'Southern' gangers hut here at Stoford west of Yeovil on the SR route to the west via Salisbury.What is remarkable is the novel new traction operating this NR-Test Train '1Q23' from OOC to Exeter and return.Due to the unavailability of the NMT this pair of DRS-Class 68's were pressed into service instead.It may or may not happen again so it was definitely worth the effort to record its passing.Here 68020 'Reliance' was on the rear of the rapidly disappearing working headed by 68004 'Rapid'. 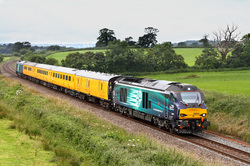 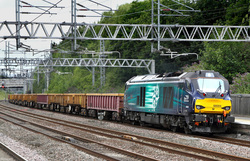 This is my first sighting of one of the new Class-68's now owned and operated by DRS working a freight-train..68004 'Rapid' powers through Tamworth-Low Level on '6U76'. This regular working departs Crewe-Basford Hall at 08:59 going to Mountsorrell to collect ballast. 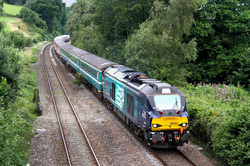 At last! my first sighting of one of the new DRS Class-68's albeit in a brief patch of dullness.This particular one being 68004 'Rapid' and it is seen at Ponthir with '5Z66' the ECS from Crewe-HS going to Pengham Sidings for overnight stabling in readiness for the next day's Railtour to Carlisle in connection with the Kingmoor Depot Open Day there.