A class of locomotive built with high hopes between 1993 and 1996.46 constructed in all but very few in operation at any one time.Indeed some have never actually been used in service.One has even been exported to Bulgaria.A fine use for british taxpayers money! As of November 2012 only 15 are actually operational---a terrible state of affairs! 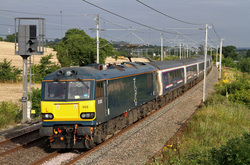 Here is the reason I left home at 04:00 (Stupid-o-Clock) over 100 miles away from here at Blisworth.The '1M16' 20:44 from Inverness to Euston Caledonian-Sleeper.Today hauled by 92033 in the new 'Caley' style livery.I needn't have left so early anyway because this train was running nearly an hour behind schedule. However that was just as well actually because we were able to picture it in pretty much full early morning light (07:51) here as it passed Blisworth. 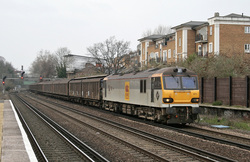 These hugely expensive and hugely under used locomotive assets do occassionally work some trains.Here is 92011'Handel' with '6O67' the 14:15 from Daventry going to Dollands Moor passing Kensington-Olympia in the centre of London.Of the 46 engines built 20 years ago now barely half a dozen see regular use at any one time.Disgustingly D B Schenker were allowed to export three to Bulgaria.Others owned by the French have virtually never worked.A strange situation all round? 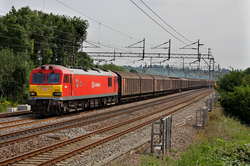 '6B41' the Water-Train beats a path north through Chelmscote.Coming from Wembley and going to Daventry-DIRFT'.One of the under used assets of the UK freight scene Schenker-Red 92016 doing the duty. 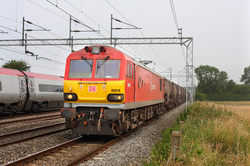 Schenker-Red 92016 heads south at Cathiron with the Mossend to Wembley '6M76' conveying mainly China-Clay tanks.Interestingly on the rear was 5 EWS Mk-2 coaches going to the Capital for use on Olympic-overflow trains to be pressed into service if required. 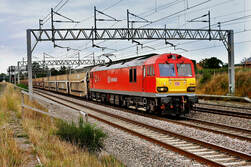 92042 passes Shallowford nr Norton-Bridge on the WCML with '6L48' from Garston going to Dagenham.These engines are quite elusive with only 2 regular paths each day on this line.