This version is equipped with higher Horse-Power (750) than the 800 series.Also larger diesel fuel tanks for the longer distances down to Penzance from Paddington these units will be travelling on a regular basis. 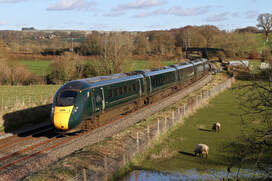 A single GWR 5-car 802008 today formed '1C84' the 14:04 from Paddington to Penzance.For sure there are quite a few unhappy passengers having to endure standing as just 5 coaches.This is certainly insufficient for a service of this importance.Viewed passing Great Cheverell nr Lavington on the B&H. 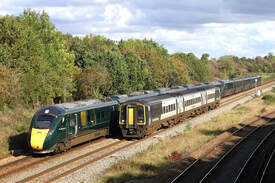 A meeting of a couple of the more recent livery styles now seen around the Westbury area. 802011 'Capt Robert Falcon Scott' brings up the rear of '1A87' the 12:55 from Plymouth going to Paddington whilsr a seriously grubby 159013 passes the other way going to Yeovil-Pen Mill from Waterloo as '1V35'.Viewed at Fairwood Junction nr westbury. 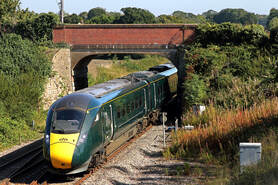 ​ 802102 pokes it big pointy nose out from under the road bridge at Woodborough operating '1C81' the 12:33 from Paddington to Taunton.The original plan was to picture '6C58' from here but the long shadows off the very tall trees here at this location scuppered that idea.This shot being a minor consolation prize! 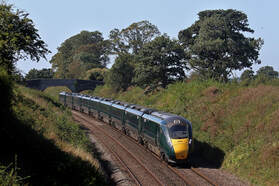 'IET' 802111 sweeps round the curves on the approach from the west to Great Cheverell on the B&H.These 9-car units now monopolize the Paddington to the West Country services.This one was operating '1A85' the 10:00 from Penzance to Paddington. 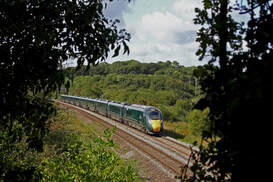 This is the first time I have pictured '1A79' the 06:47 from Penzance to Paddington since the demise of the HST's on this duty at the end of may just over 3 months ago.Nowadays it is a 9-cat IEP,this one being 802110. Nuff said! 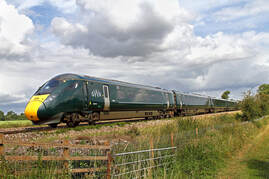 5-car  802012 along with an unseen 802011 speed away from Fairwood-Junction nr Westbury working '1C82' the 13:03 from Paddington to Penzance.Sadly these 'things' are so mundane I usually look the other way but today I made an exception just to remind viewers what a boring situation passenger services now to Plymouth and beyond have become! 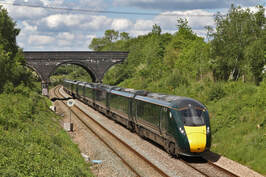 ​ Here is a double dose of Japo-Plastic 802012/802019 running down the Frome Avoider with '1C84' the 14:03 from Paddington to Penzance.This service held out to the very last day of HST operation to the west but is now boring,bland and as of monday this week barely worth a glance! 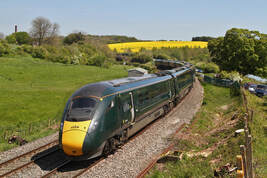 GWR 9-car Plastic-Pig 802102 leans into the curve at Crofton with '1C81' the 12:33 from Paddington going only as far as Taunton.Note the Crofton Pumping Station chimney standing proud in the distance. 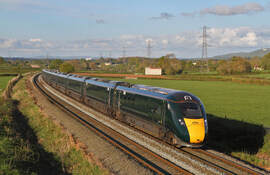 9-car Class 800-IET 802102 rolls towards journeys end at Frome with '1J91' the evening 'stopper' from Paddington that departed there at 17:07.
When compared with the recently introduced LNER versions with their quite impressive livery styling you realise just what an depressing sight
this GWR-Green presents as a public image.I suppose it reflects the GWR company--------dull and unimaginative. 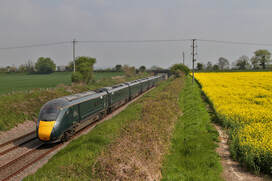 ​ Quite honestly I think the field of Oilseed Rape here in the fields at Bratton on the B&H to be of more interest than this pair of Hitachi-Plastics! Just for the record they were 802003 & 802013 working '1C78' the 11:03 out of Paddington going down to Plymouth. 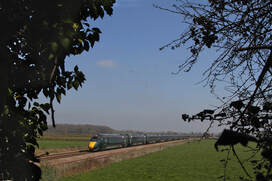 Here is a seemingly brand new Class 802108 rolling fairly slowly down through Berkley Marsh nr Frome.The working '1C76' the 10:03 from Paddington to Penzance was already late by nearly 30 minutes and would be delayed even further (another hour) whilst it diverted via Yeovil to Exeter due to the line closure at Stoke Cannon because of a fatal on the road crossing there. 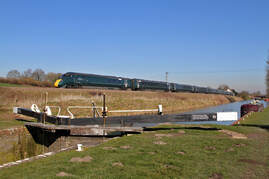 802102,one of the 9-car sets specifically designed to run on the Paddington to Penzance long distance route is seen passing Lock-60 at Crofton with the 11:21 from Taunton to Paddington '1A80' service. 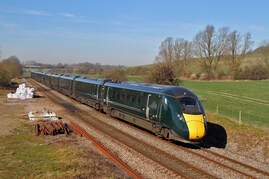 This is a '802' pairing 802012 &802020 making up the 09:20 from Taunton to Paddington 'fill-in' service whilst the line west of Taunton is closed.10 carriages of almost silent soulless japanese GWR plastic. Seen nr Crofton on the B&H. 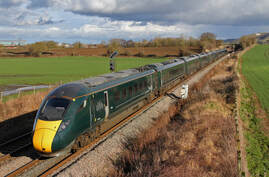 GWR's IET-pairing 802006/802005 gets away from Westbury at
Fairwood with '1C84' the 12:57 from Paddington going only as far as Truro.Presumably the line between there and Penzance being closed for some kind of engineering requirement. 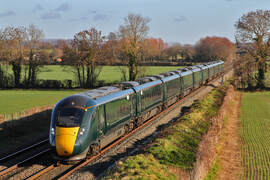 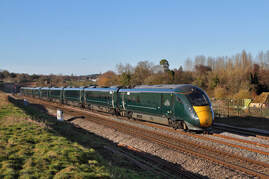 802018/802019 pass Hungerford Loop with a working designated as '1Z81' from Newton Abbot to Paddington.It ran up from Penzance (07:41 off) as '1A81' as far as NTA.There was a fatality at Starcross around that time so that may have had something to do with it? 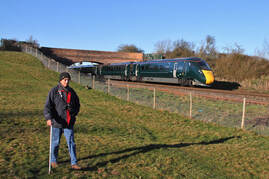 Well known photographer Tony Callaghan strides across the Common at Hungerford studiously ignoring  the speeding Hitachi Unit 802021 as it zips by working '1A77' the 05:41 from Penzance to Paddington.