Richard Bransons contributions to speeding up the WCML was the introduction of these tilting EMU's.Regretfully they have totally replaced all regular scheduled locomotive hauled (or push-pull) workings on this route all the way from Euston to Glasgow and all points in between. 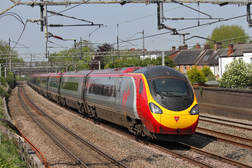 Here is 390154 in the soon to be disappear original Virgin-West Coast  livery scheme.Pictured at Atherstone speeding north with '1S63' the 12:09 from Euston going up to Glasgow-Central. 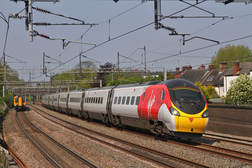 With 350114 on '1U33' the 11:33 from Euston to Crewe-stopper slowing for its Atherstone Station halt Pendolino 390043 in the latest 'Flowing Silk' revised livery for Virgin-West Coast speedss outhwards with '1A31' the 11:55 from Manchester-Piccadilly to Euston. 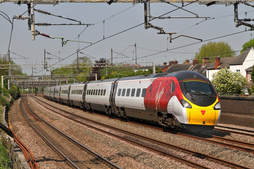 The Virgin West Coast Fleet of Pendolino's are currently undergoing a re-liverying programme into the new 'Flowing Silk' styling seen here at Atherstone as 390020 speeds southwards with '1A30' the 11:32 from Liverpool Lime Street going to Euston. 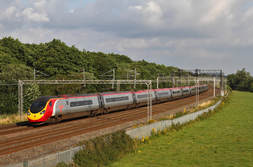 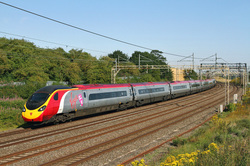 Pendolino 390131'City of Liverpool' heads northwards at Old Linslade.It was an 08:20 departure from Euston going to Manchester-Picacadilly.The  report number for this working was '1H12'..Note the vinyl logo 'Proud Partner of Business in the Community' applied at the same jaunty angle as the Virgin script.It refers to the link between BITC and the City of Liverpool. 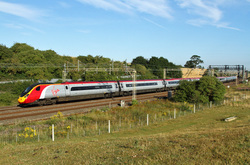 9-car Pendolino 390047 sweeps though the deserted countryside at Old Linslade on '1R11' the 06:05 from Liverpool-Lime St to the Capital. 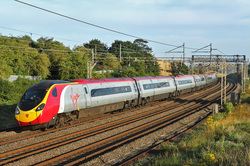 The 05:05 from Manchester-Piccadilly to London-Euston '1R02' leans into the curves at Old Linslade on its journey south.10-Car Pendolino 390136 was doing to job.I know these things are not rated by the average lineside photographer but the size of the set number is really un-necessarily small.Still I suppose it means that if you cannot read the number from the picture it shows the shot is fuzzed and not worth having! 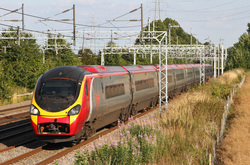 Open Mouthed 9-car Pendolino 390045 heads northwards past Easenhall with '1H39' the 17:20 from Euston going to Manchester-Piccadilly.This is still a 9-car unit.If like so many others it had been increased in length from 9 to 10 carriages its running number would have changed from 390045 to 390145. 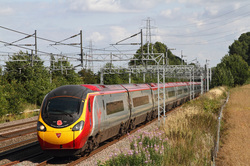 Pendolino 390103 which carries a Commemoration for the Fallen in WW1 1914-1918 speeds northwards past Easenhall nr Brinklow on '1S78' the 15:30 from London-Euston going all the way to Glasgow. 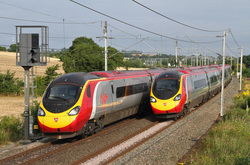 This perfectly positioned passing shot was extreemly lucky!With a combined passing speed of something approaching 200mph it was a rare piece of good fortune. Pendolino 390157 is the one approaching with '1R10' the 06:10 Manchester-Piccadilly to Euston whilst 390126 is heading north on '1F11' the 07:07 from Euston destined for Liverpool-Lime St.   Nice one! 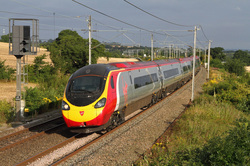 Pendolino 10-car 390129 leans round the curve at Blisworth heading south with '1R08' the 05:55 from Manchester-Piccadilly to London-Euston. 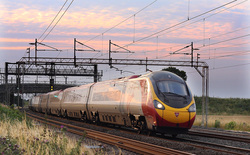 Final shot of the day as sunset was approaching is this Pendolino 390040 coming at me out of the setting sun at Soulbury nr Bletchley travelling at over 100mph.Its destination is obviously Euston.Where it came from is anybody's guess! 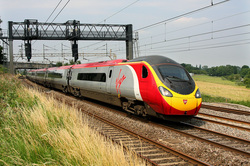 390050,one of the many Pendolino's that infest this stretch of line speeds southwards past Chelmscote south of Bletchley on the WCML.Working unknown and who really cares anyway! 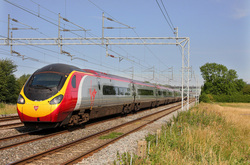 Numerically numero-uno 390001 Pendolino speeds south through Cathiron heading for Euston.No clue as to the service,these things are so fast and close together indentification of the actual service is practically impossible. 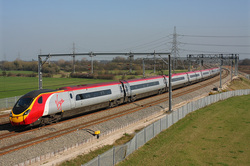 No session on the WCML these days would be complete without at least one shot of a Pendolino.Here is 390035 leaning through the high speed curves at Litchfield heading north.Service is ?--you tell me!