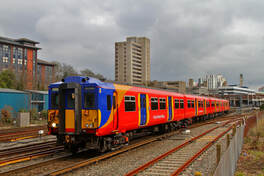 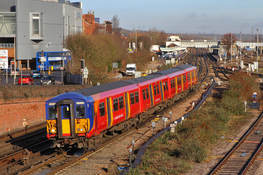 'South Western Railway' branded  4-car EMU 455716 runs ECS through Eastleigh as '5B39' the 10:01 from Wimbledon Park Depot going to Bournemouth T.R.S.M.D for regular planned maintenence.Of interest is that these 455/7's sometime ago had an extra carriage added that originated as TSO's from Class-508's.That addition can be seen here as the 2nd carriage in the set.The slightly different roof profile being the give-away to its origins! 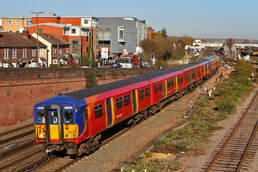 Here is a pair of London-Waterloo suburban-EMU's 455738 and 456006 running down from Wimbledon Park Depot (10:01 off) to Bournemouth T&R.S.M.D for some planned maintenence.Reporting number being '5B39'.These moves happen regularly but it is still quite nice to see an EMU through here is this vivid-red livery normally assoc with the London area only! 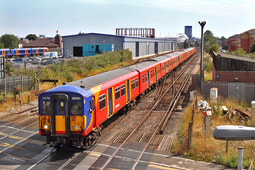 The only time these Class-455 EMU's pass through Southampton is when they are travelling to or from Bournemouth T&R.SMD for Mtce.Here is a triple dose of Class-455's led by 455713 returning to Wimbledon Park Depot Sidings as '5Y51' the 14:32 off Bournemouth. 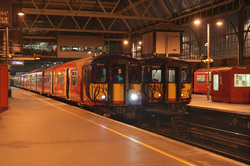 A pair of SWT-Red liveried suburban-units stand in Waterloo awaiting their next duties.455718 and 455709 being their identities. 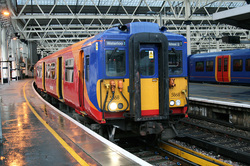 455868 stands in a rather damp Waterloo awaiting its next duty.Judging by the destination board its going to be to Richmond.Interestingly these units only display the final four digits of their number on the cab-ends. 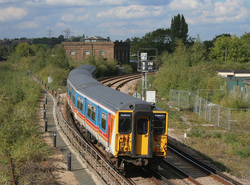 Running into Guildford from Waterloo via Epson is this 4-car EMU 455867.