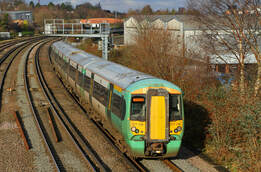 'Southern' EMU 377136 passes Mount Pleasant in Southampton with '1W69' the 12:33 from Brighton to Southampton-Central. 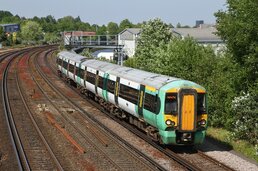 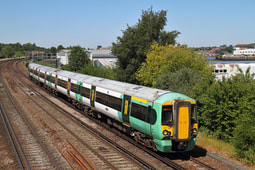 These Bombardier-Derby built 'Electrostars' are the most common Units in use with the 'Southern' TOC.Southampton is the furthest west they can be seen being mainly confined to routes out of London on commuter duties.This 4-car set 377428 is heading for Southamton-Central with '1N71' the 13:33 from Brighton using the West-Coastway Route.Viewed at Mount Pleasant in Southampton. 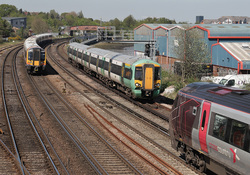 One thing you are never short of around Southampton is plenty of 'Unit' action.Captured in one shot are SWT-444017,Southern's-377439 and  an Arriva-XC Voyager 220026.All pretty mundane stuff.It was 15:15 in the afternoon so you can work out the duties yourself if you are that inclined.
Go  HERE for that.
The scene is again Mount-Pleasant in Southampton. 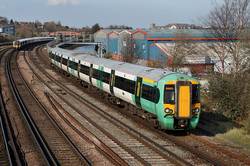 A Southern Electostar 4-car formation 377412 eases round the curve with a working from Portsmouth going only as far as Southampton.This is the limit for Southern operation and as far west as they come.Seen passing Mount Pleasant in Southampton.