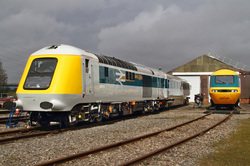 The pre-production prototype HST Power-Car 41001 from Set-252001 whose final design was changed is several ways including the loss of the buffers,added side windows and a more streamlined front-end stands next to the production-prototype 43002 shortly after its unveiling at St Philips Marsh in Bristol.41001 has now been restored to full working condition by 'Project Miller' whose final objective is to see this loco returning to the mainline some time in the near future. 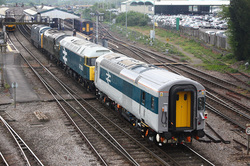 This is the view as '0Z56' rolls non-stop through Westbury hauled by 55002.As can be seen the 'Project-Miller' 41001/43000 now looks pretty smart.Over the last few years major work has been put into this machine to return it to mainline standards including a replacement power-unit,complete rewiring and considerable bodywork renovation.Several years work still remain before it can move under its own power!
To further explore this ongoing restoration click ﻿HERE﻿ 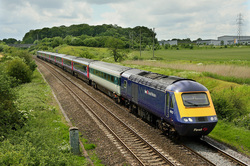 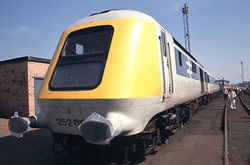 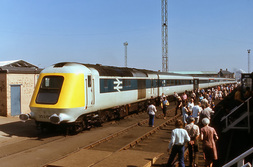