The current EMU in use on the WCML on local stopper services out of Euston to the Midlands.Some are dual-voltage for cross-London services.(See seperate Gallery for those) 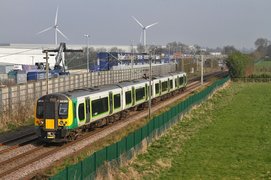 Midland-350249 glides northwards past Daventry-DIRFT at Barby Nortoft with '1W17' the 14:49 from Euston going to Birmingham-New Street. 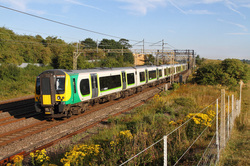 A morning 12-car 'rush-hour' lash-up of 350258/231 and 126 speeds past Old Linslade on '1Y84' the 05:52 from Birmingham-New Street to Euston.Note the nice old fashioned post-n-wire fencing along this stretch of the WCML.Completely servicable and far more pleasing to the eye than the awful palisade fences that now stretch for miles and miles all over the country. 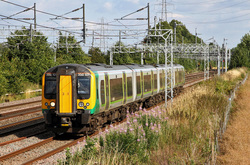 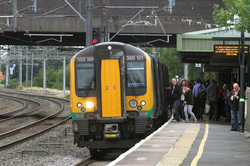 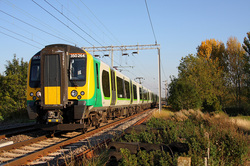 London Midland 350264 speeds north on the 16:55 from Northampton going to Birmingham-New Street. Location is still Church Brampton but about 1000yds further south from location seen below. 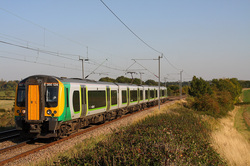 Apart from freight the only other booked traffic on the Northampton loop are these local 'Unit' workings.All Pendolino's take the other route north to avoid the slower traffic. Here is London-Midland 350124 heading north at Church-Brampton on the 14:46 from Euston going to Rugby.