Just a bit of  Information about Myself and my Background-etc 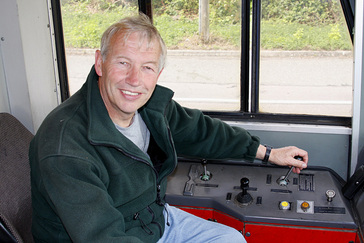 Me in the Cab of Everybodys Favourite LoadHaul- 60059 a few years ago!
I have always had an interest in railways all my Life. My Father worked as a GWR Goods Guard and when he moved to Warminster Station to work I spent many hours on the Station whilst he did his shifts.Since I was born in 1948 that is now a rather long time ago.Memories of Halls,Manors,Castles,Counties and even Britannia's going through that station are still quite vivid though.

I spent many hours bunking Engine-Sheds in the early 60's including the fabled Kings-Cross Top Shed,home of the A4's and the Flying Scotsman plus all the major depots in the south of England and Scotland.Just number crunching in those days! with some 35mm from the mid 60's.

Like most teenagers I lost interest in the late sixties when reaching the age of 17 or so.Eventually restarting to take pictures again in the mid-70's.

Everything took a back seat in the late 70's when like everybody else Marriage happened and DIY and Overtime were the main considerations.After a 15 years of that thoughts turned again to interest in Railways.

I finally got 'serious' again around 1990 when it seems that LCHS was disappearing fast and classes such as
'50s' and '33s' were losing booked work rather quickly and many earlier classes had already gone!

Started off again in 1990 using initially a 'video8' camcorder.I kept this up sparodically until a few years ago when I realised
trying to do video and still pictures at the same time was just too much effort.I have many hours of good material from the 90's etc but enough was enough.I concentrate now on Pictures.My equipment from the early days (1975) has always been Japanese 35mm SLR's. Pentax Spotmatic/Olympus OM1/2 and finally a pair of Canon-EOS(film).Really early stuff was on Cameras such as Halina35x/Brownie127 and Kowa with an occasional Yashica TLR(6x6) picture.

Digital finally took a hold in about 2004 with the purchase of a Minota Dimage 7i, then a Minolta A200.
When it was realised that Digital was the way to go and 'Slide-Film' would soon be a thing of the past (Which it virtually was by 2011) the decision was made to fully convert and cease using the analog-kit.

Camera's used since the  complete digital changeover in 2006 have been all Canon EOS.
Starting with a 350D, now sold,followed by a 400D and after that a 40D which is still retained as a back-up.Main camera used now is a 7D.

The Slides scanned for use on the site were done until recently on a Minolta-Dimage Scan Dual 2.I have just obtained an Epson Perfection V500 PHOTO (Jan 2013).Mainly because it has ICE technology to mask all the dust and blemishes.Not a top of the range unit but after this price-point things start to get rather over expensive so that one had to do.

All processing is done using Canon DPP for RAW processing then finally passing pictures through Adobe-Photoshop-7 (CS2 since Jan-2013) and Neat Image (Where necessary).

I worked to Post-Office Telephones from the age of 16 (1965) and stayed with them (As British Telecom) until I finally retired in Sept-2009. a total of 44 years.That's enough time to be with any Company.As with most employers these days the last few years were terrible with unreasonable employer demands to the workforce almost daily.Also I knew it was time to leave when the bastards put a tracker in my Van! Glad to get out when I did.All I know is most of my former workmates walk around these days with very very long faces and to a man hate the job now!! Whatever happened to the Apprenticeship---then up through the ranks Career advancement that we older people enjoyed in the 60's-70's-80's?  Today you start at the bottom and stay there (And like it!) whilst the fat cats at the top get fatter! No wonder this Country has gone to the Immigrants---- I mean the Dogs!!!!!!!!!!!