A modern class who's UK career sadly cut short by the headlong drive by EWS to equip itself with 66's.Many still working but in France and Spain.One example is preserved so far. 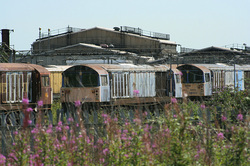 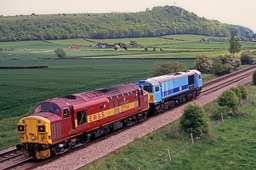 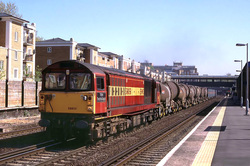 Final member of the class 58050 and last locomotive built at Doncaster (Hence claimed by the NRM for posterity when it finally finishes in  active use.) draws through Kensington-Olympia in Central-London with an Eastleigh to Wembley Enterprise service. 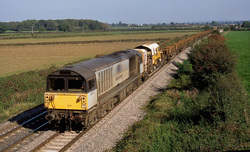 Mainline Freight's 58031 runs down through Berkley-Marsh nr Frome with a CWR-Set.Ridiculously this entire class of 50 locomotives was removed from service within 3 years.Victims of the mass influx of GM-66's from North-America.However many went to work  in Europe including this example.It went to Spain numbered 'L45' and even gained a UK style cast nameplate 'Caballero Ferroviario'.Again  it has become surplus and is currently stored in Southern Spain at Monforte Del Cid nr Alicante.We await future developments? 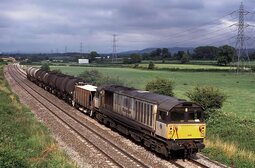 On this particular day '6V62' the 10:44 from Fawley Refinery to Tavistock Junction had an unexpected addition in the form of a fully loaded SeaCow ballast wagon along with the regular Bitumen and Fuel Oil.Here it is viewed passing Berkley Marsh nnr Frome being hauled by one of the now long gone Class-58's  58045 in Mainline Grey. Strangely 'Taunton Trains/6V62 listed this as 58033 but as my records for this period were quite meticulous that is incorrect! 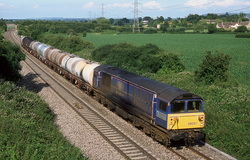 Mainline-Blue 58021 with its big-plate name 'Hither Green Depot' passes Clink nr Frome with the 'Tavvy-Tanks' from Fawley going to Tavistock-Junction in Plymouth as '6V62'.Within a couple of years this entire class was culled by EWS and many including this example went to France on Contract-Hire duty.This example returned and shortly afterwards again was transferred to France.That duty finished a few years ago but the loco remains there stored in case of possible reuse. 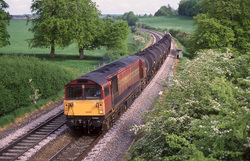 The well known '6V62' from Fawley down to the South-West used to transport bitumen as well as fuel oil.Here is that dual product working passing Sherrington in the Wylye-Valley with 58049 in charge.Around this time Eastleigh had become the southern stronghold for many members of this class.In 2014 however this loco now lies stored (abandoned?) in France after working there from 2009 for Infrastructure work for a while.It did work in France from 2005 to 2007 but returned home after that duty. 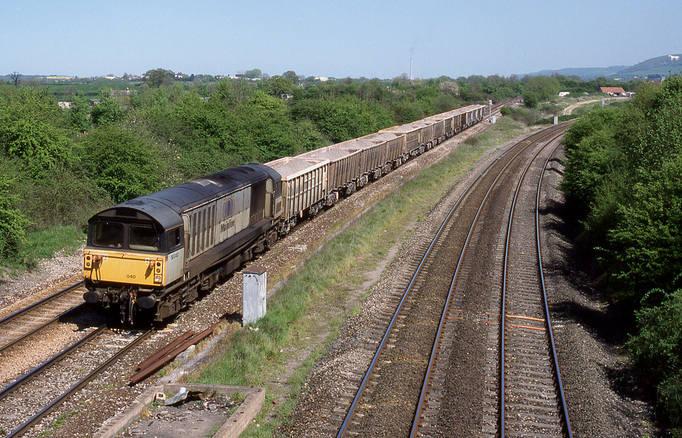 'Bone' 58040 heads its loaded train of stone coming from Merehead via Westbury to Riverside-Yard at Exeter.From there the contents of these workings was trucked up the A303 to be used to construct the Honiton Bypass.For quite a while these workings were double-headed 37's then for a while pairs of 58's.The final few weeks of the contract solo 58's handled the traffic.Location is Fairwood-Junction just West of Westbury.Within 3 years all UK based 58's were withdrawn and this example 58040 today lies stored in France after being used on an Infrastructure contract over there.
The future for this and all the other members of this class is (As of  Feb-2014) a bit of a mystery ? 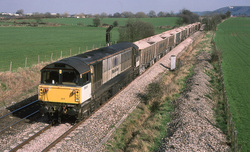 58017 'Eastleigh Depot' passes Fairwood with a loaded stone working bound for Exeter-Riverside Yard .These workings were in connection with the construction of the Honiton Bypass.This engine has the dubious distinction of becoming the first '58' to be officially withdrawn from service just a couple of weeks after this shot was taken.After languishing at Eastleigh since then it was finally cut up for scrap there in December 2013----14 years later! 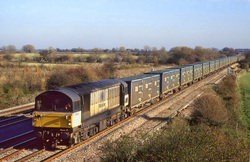 The view from the bridge on Circourt Road at Denceworth looking eastwards produced this shot of 58040 'Cottam Power Station' in its dull colourless 'Mainline Grey' livery.It was hauling '4C13' the 11:21 empty 'Binliner' from Calvert heading for Bath and Bristol to exchange its empty containers boxes for more that have been filled in those cities with mainly domestic rubbish.Unfortunately both those places now incinerate the rubbish so the need for this working has now ceased. 58040 migrated to France in 2004 and returned in 2006.A further french contract saw it exported again in 2009 and it has remained there ever since.It has now been in store at Alizy-Depot in Rouen for some considerable time.Its future uncertain.With the
current national shortage of good reliable reasonably modern traction this
situation is nothing short of a scandal.However Schenker couldn't give a                                                                          toss! 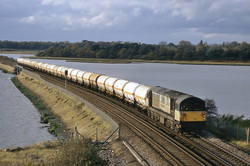 '6V13' the 13:20 from Furzebook going to Hallen Marsh in Avonmouth withs it  load of Liquid-Petroleum-Gas runs slowly across Holes Bay on the approach to  Poole.Grey 58040 was in charge.Today in 2015 58043 lies stored and derelict  in France at Alizay Depot in Rouen after several years use on rail construction  projects.Its ultimate fate is up to now unknown but apparantly it has been quite  heavily looted by the french copper-fairies so it does not look too promising??? 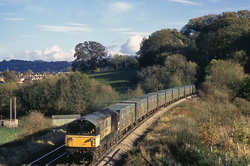 58043 in 'Mainlne-Grey' exits Twerton Tunnel west of Bath with (I think)  '4C13' the 11:22 from Calvert to Westerleigh-BinTerminal in North-Bristol  which included a stop at Bath's Oldfield Park to drop off empty containers and  pick up some full ones loaded with domestic rubbish.Of coarse now Class-58's  are history as is this working due to the Bristol and district Councils going over   to incineration of waste as apposed to putting into landfill at Calvert. 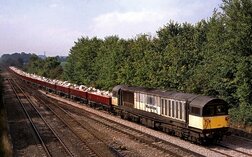 After the well known flow of 'Rocks' from Merehead to the West Somerset Railway ended a short contract took place (2 weeks) taking similar large stones to Southampton Docks for movement to the Isle of Wight for use is sea defence work there. Here is 58029 coming over Fairwood Junction with one of these workings from Merehead to Southampton-Docks.This particular loco was exported to Spain in 2004 and has remained there ever since,although it has been stored since 2011.The entire class is of course extinct on the mainline in the UK which was a pity.Good old EWS! 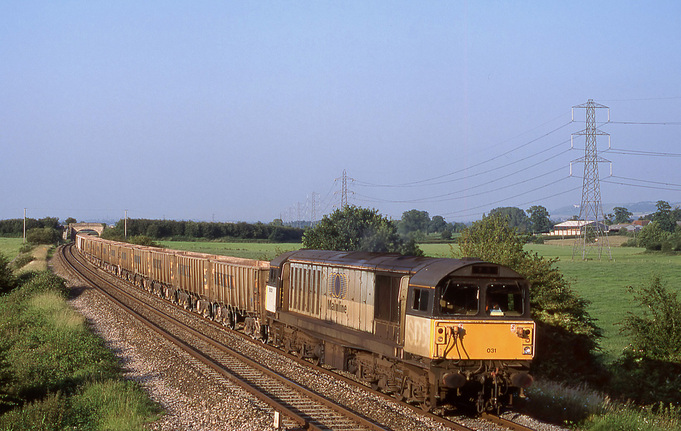 A british built class that has had mixed fortunes since this shot was taken.At this time the entire total of the class (50 locomotives) were still listed in capital stock but due to EWS's narrow-minded fixation with GM-66's all were withdrawn by 1992, just 3 years later.Many worked again but abroad in Holland, France and Spain.Indeed 24 are still in France,albeit currently stored and a further 10 in Spain.This particular engine seen here at Berkley-Marsh nr Frome on a Westbury to Whatley empty stone boxes tripper ended up going to Spain as 'L45' for GIF.It has recently been sold to Transfesa but its current status or fate is unknown.
..03 july 1998.. 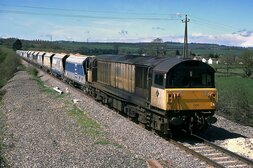 Filthy grey Mainline liveried 58006 c/w its 'finger' written name 'The Norm' rumble slowly up the branch from Merehead Quarry to the mainline at East Somerset Junction.Time was about 13:45 in the afternoon but the working is unknown to me! Just a short set of hoppers so could be Eastleigh or Wootton Bassett--You tell me! Location is Wanstrow,my favourite location for taking my lunch break and picturing a couple of stones which at this time included the 'Minehead-Rocks'! 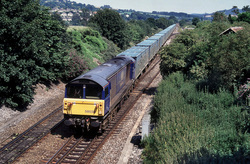 For a period in the late 90's  Class-58 locomotives were the preferred traction on the Bristol/Bath/Calvert Binliner Circuit. Here is 58038 passing Bathampton Junction with the empties ready for loading at Bath and Bristol Bin depots.Note containers were blue then,when Freightliner won the contract a different set of green ones were used.This engine has had an interesting history since the shot was taken. In May 2005 it went to the Netherlands to work for ACTS around Rotterdam and then after that contract ended in 2008 moved on the France where it worked for a few years.It is now however in store there with an uncertain future. 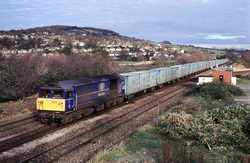 The final-built of its class 58050 sporting the then current company colours on 'Mainline-Freight' hustles past Bathampton-Junction with the empty 'Binliner' from Calvert going to Bath and Bristol's refuse collection points for loading.Today this engine has been claimed for the National-Collection so is nominally preserved but at this time is languishing stored in a french siding somewhere awaiting repatriation after a contract infrastructure job there a few years ago (circa 2011) was completed. 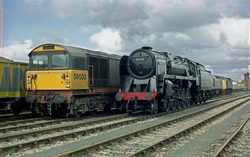 When this shot was taken 58003 represented the latest in freight haulage technology for the UK.It was barely 2 years old but within 14 years it was withdrawn from service. The 9F actually only lasted 8 years before going the same way in 1967.Ironically 58003 is now no more being cut -up in 2010 whilst 92203 'Black Prince' is still in regular use on the G&W-Rly at Toddington.Both Classes were victims of managements lack of vision.A typical UK disease.   The picture taken at Westbury during the Open-day there for GWR-150.
..05 may 1985..