Now a defunct livery as the owning company 'Jarvis' have gone into receivership. 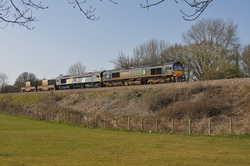 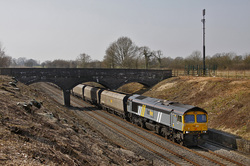 Short lived 'Fastline' Liveried 66304 passes Alderton on the 'Top-Road' with '6M90' a saturday-only working from Avonmouth going to Ratcliffe-Power Station c/w matching coal hoppers.Regretfully this quite appealing loco colour scheme was rather short-lived with the demise of the owning parent company of Fastline---Jarvis.The locomotive however continues to work but is now part of the DRS-fleet and currently carries the 'Compass' styling of that concern. 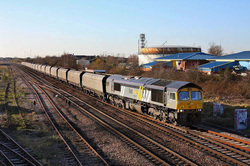 Before Jarvis-Rail went to the wall taking  the seemingly bouyant Fastline-Freight with it 66304 in the tasteful Fastline colours is pictured at Highworth-Junction in Swindon with '6M90' a SO service delivering loaded coal from Avonmouth to Ratcliffe-PS. A superb sunny winters day something that in 2012 has been a very rare event indeed!. 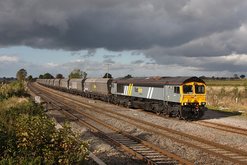 New Fastline 66303 passes Elford Loop with a Ratcliffe-PS to Daw-Mill  empty coal working '4G81'.The future seemed bright at this time for Fastline-Freight,new coal flows,new GM's and a regular intermodal from Birch-Coppice.However things turned sour and the Parent Company Jarvis folded in March 2010.All wagons and locomotives were sold or returned to the lease companies.
..16 october 2008.. 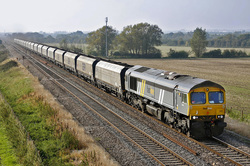 Wearing 'Fastline' colours 66305 passes Bourton east of Swindon with the SO '6M90' from Avonmouth to Ratcliffe-PS.Note the use of GBRf bogie coal hoppers! Unfortunately this working didn't last too long as by March-2010 the owning Company 'Jarvis-PLC' had been forced into liquidation so Fastline died by default as well.This loco along with all GM-66's owned by Fastline (6 in total) passed to DRS and in 2016 are still working with that Company. 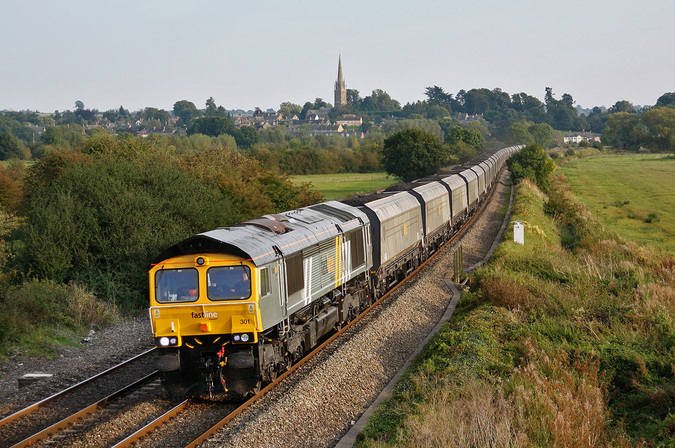 This was (I believe) the first run from Avomouth operated by the then fledgeling freight-company 'Fastline-Freight.At this time they were serious about making in-roads into the bulk haulage market having bought five new GM's (66301 to 66305).This working views a new 66301 hauling 'Fastline' branded coal hoppers is seen passing Kings-Sutton with '6M90' with loaded coal from Avonmouth going to Ratcliffe-on-Soar-PS. Unfortunately the owning company 'Jarvis-PLC' went into liquidation in March 2010 and the freight-arm (Fastline) was wound up.This loco is now rebranded and working for DRS. A pity as the grey livery was particularly nice.