Long gone on the National-Network but still a few preserved including one that does some mainline workings. 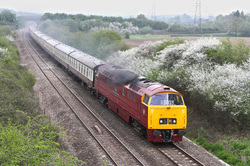 Today a Railtour ran from Paddington (07:37 off) to Okehampton via Plymouth (Reverse).It was named the 'Western Challenger' and ran as '1Z52' and was powered by D1015 'Western Champion'.The loco was wearing D1010 'Western Campaigner' identity on one side and D1058 'Western Nobleman' on the other.The side depicted here passing Frome in rather dire lighting was the 'Nobleman' side.Amazingly in the interest of authenticity it even had a typical splurge of heavy soot deposits all over the roof. Very Nice! 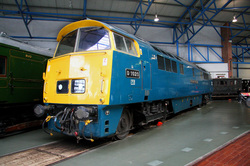 Still wearing its final livery style of BR-Blue c/w full yellow ends 'Western Fusilier' D1023 stands in the NRM for all to see.Up to 2009 it did the rounds of various preserved railways actively hauling workings.However since 2010 when serious transmission repairs were required and completed it has remained in the Museum on static display. 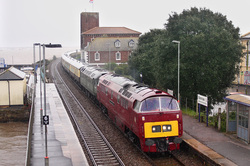 At last the reason for enduring the awful conditions here at Starcross.It was the returning Kingswear to Tyseley 'Western Devonion' Railtour '1Z52'.The howling wind -n-rain was even more intense when this roared around the corner past the old Atmospheric Pumping Station.Big Hydraulic D1015 with its green ETH-unit 47773 pass Starcross returning to the Midlands after a day at the seaside in Devon. 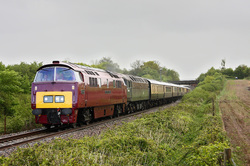 No quite the shot I was hoping to get because as usual the weather failed to behave itself when needed! Here is D1015 with 47773 or D1755 in old money along for ETH purposes approaching Cogload Flyover with '1Z15' from Tyseley going the Kingswear.A pretty poor picture but the sound of the Western on full power was still pretty impressive at least! 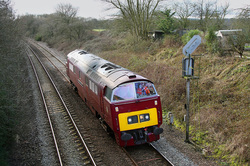 This working '0Z52' is returning D1015 from Bishops-Lydeard to Tyseley in Birmingham after it had delivered D821 from Kidderminster (SVR) to the WSR the previous day.Here it is on once familier ground for this engine at Blatchbridge nr Frome.It spent the final years of its active life hauling stone out of the Mendip Quarries.
Click HERE for my picture of it 38 years ago at Westbury Diesel Depot in 1976! It was a bit of a wreck then! 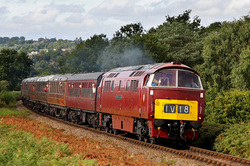 First working to appear here at Foley-Park in reasonable light was the 10:30 from Bridgenorth going to Kidderminster.This was hauled by D1062 'Western Courier',a long time resident of this line.Coaching stock being mainly ex-LNER teak bodied but with a seemingly strange profiled BR Mk-1 immediately behind the engine.(This is actually 'E3083' an experimantal 1st class open coach built in 1957 at Doncaster,hence inclusion in the LNER-Teak set)..The headcode '1V18' I am pretty sure used to be used on a working coming up from the Southern Region going to Bristol or Cardiff via Salisbury 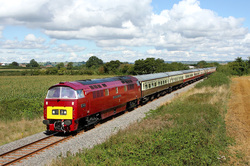 This was to be my final picture today of '1Z52'--'The Western Wessexman' Railtour run by Pathfinder-Tours.Thankfully that organisation was not let down by DBS on this occasion.It is photographed as Cockhill a mile or so south of Castle-Cary on the single line to Weymouth.This is a rare place with no serious vegetation (yet) to ruin an unobstructed view of pretty much the whole of the train set. Of coarse the loco in charge is a resplendant D1015.Its condition a far cry from how it looked in the months prior to its withdrawal as seen here at Westbury way back in 1976.
To see it then click HERE. 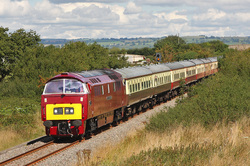 Chances of catching this fabulous machine in action are pretty few and far in between so a further chase from Frome was made,this time to just south of Castle-Cary to Cockhill on the single line from there towards Yeovil.Sure enough minutes after our arrival the drone of the twin Maybach's could be heard.Once again the sun god was on our side as '1Z52' droned by.I actually saw this loco being constructed at Swindon in 1963 50 years ago as a spotty teenager and I have to say I doubt if it has looked any better since the day of its introduction.
..07 september 2013.. 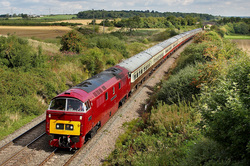 After D1015 had passed Bradford-on-Avon I leapt on my trusty Suzuki GSF600K4 and rode quickly to Frome at Clink to obtain another shot as it continued its journey to Weymouth.Bradford-on-Avon is notorious for slow moving traffic bottlenecks so use of my motorcycle neatly sidestepped that problem! So here is D1015 again on '1Z52' making good progress past Clink nr Frome.The sun god was looking down upon us again here as despite appearances the full brightness only arrived seconds prior to the vital moment! 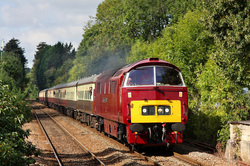 The superbly restored 'Western Champion' D1015 hums through Bradford-on-Avon at full throttle with '1Z52' from Leicester (05:53 off) going to Weymouth.Needless to say it was running bang on time.Welcome back!  Most of the steam-nerds that watched new-build icon 'Tornado' speed through in the opposite direction barely 10 minutes earlier had all disappeared back from where they has come from.Any true railway enthusiasts would certainly have waited to catch a glimpse of this mega 50 year old class-act of a machine! 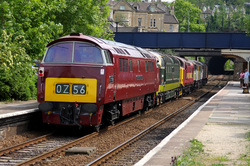 A 'Going-Away-Shot' here at Bradford-on-Avon was certainly called for with this little lot.Note the GWR bench on the down platform.Reading back to front D1062/55009/37503/56301 and 57601 made up this convoy on its way to Swanage for the Gala there.Going as '0Z56' from Kidderminster.Just wish I could go there over the weekend but I have a prior arrangement,(Going to Venice on a Cruise-Ship).Life can be hard sometimes!
..05 may 2011.. 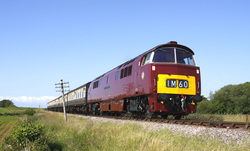 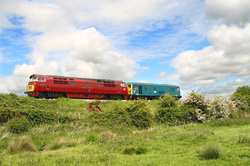 D1015 was used to drag 73006 from Kidderminster to Eastleigh so they could both participate in the Eastleigh-Works open-day arranged for the coming weekend.Here the small convoy '0Z73' is seen climbing away from Westbury heading south at the start of the Upton-Scudamore Incline.In the foreground can be seen an interesting relic of bygone steam-days.The bufferstop just visible in the ever encroaching bushes was the headshunt for the large steam shed that existed here until 1964 --45 years ago. I well remember loco's reversing off shed to this point prior to going up on to the mainline...
..22 may 2009.. 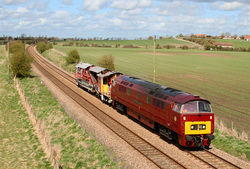 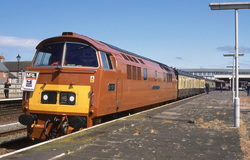 The once regular yearly Staff-Outing for Foster-Yeoman ran to North-Wales in 2003.D1013 'Western Champion' was used instead of the usual pair of 59's.The train '1Z31' ran from Castle-Cary via the Welsh-Marches to its destination Llandudno-Junction.From there various bus tours took the passengers to their selected destinations.I was on the train and actually alighted at Rhyl for a day by the seaside.Here is D1015 at Rhyl shortly before it moved off for Llandudno-Junc.The day was memorable because the skies were completely clear all day and a good day was had by everybody! 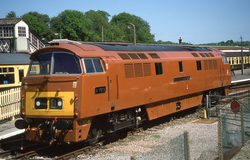 Looking immaculate D1015 'Western Champion' stands at Yeovil-Junction on display at the small Railway-Centre there during an Open-day held there.Behind it was a set of Mk-1 coaches that this loco was to haul next day on a Railtour to Llandudno-Junction in North-Wales.I actually travelled on that one.This scene with no spiky fencing,orange jackets or crowds on the platforms could almost have been in the early 60's when this engine was built and given this unique 'Golden-Ochre' livery.Click HERE to see it in action on the mentioned Tour next day.

D821 and D1013 stand together outside the Factory at Old Oak Common.Both locomotive displaying liveries they once carried when in mainstream service albeit many years apart. 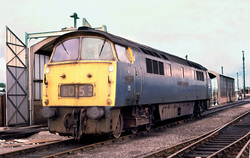 Crewe built D1053 'Western Patriarch' stands in Westbury Diesel Depot awaiting its next duty.By this time a fair number of the class had been allocated here to handle stone traffic.The weekends would see as many as 10 members of the class parked up as the Quarries were not operational at weekends.Although it was only 13 years old when this shot was taken it was taken out of service within 3 months in December 1976.Hydraulics were deemed 'non-standard' and so had to go! What a decadent waste! 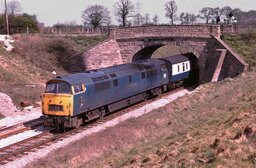 Still doing the odd Class-1 service the D1000's were in the twilight of their career when this rather 'iffy' shot was taken of 1053 'Western Patriarch' emerging at full speed from under the Clink Road Junction roadbridge to speed up the Frome avoiding line.Note the 'D' has been painted out on the cast alloy numberplate as per all diesels after steam was eliminated back in 1968.Since there was no more steam the 'D' was deemed unneccessary! 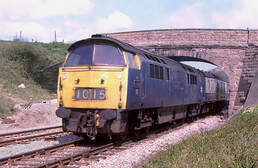 D1015 was still in front line service at this time.Here it is speeding under the long gone original Clink Road Bridge in Frome heading for Plymouth (Probably).At this time the road here was a little used country lane unlike now when it is the main exit from the Town out to the bypass.Also in those days I was right opposite the Clink Road Signal Box.No animated shouting or hi-viz aggression in those days.Just a friendly wave and information about 'whats' next! 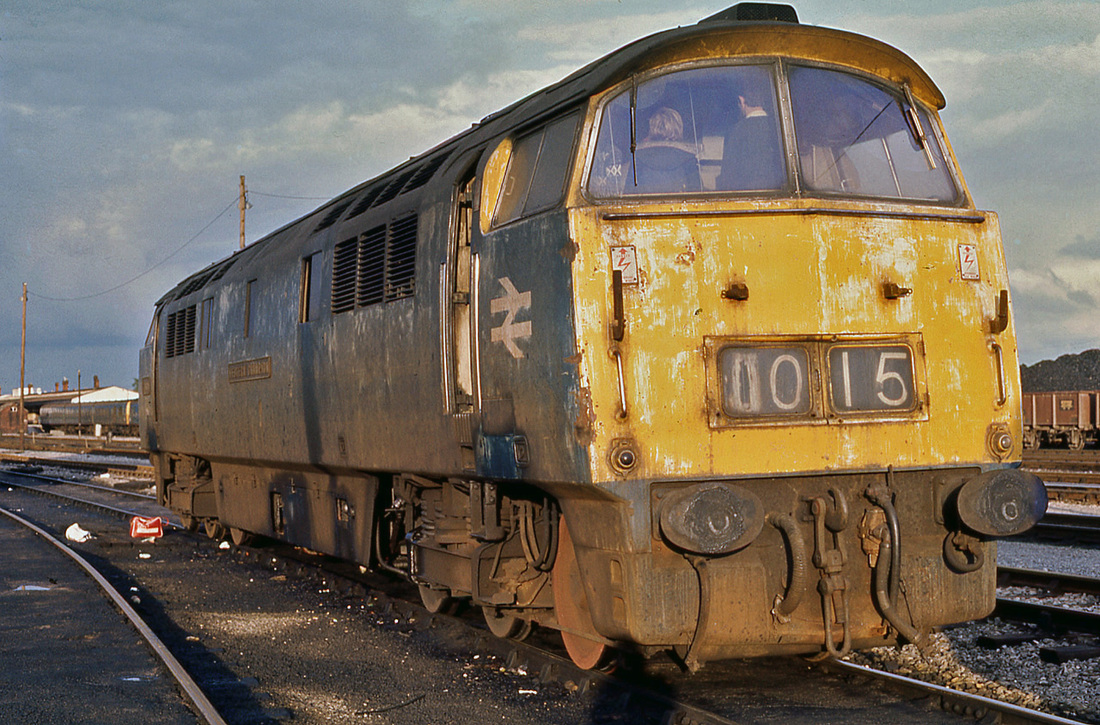 For all you people out there frothing about the return of D1015 'Western Champion' This is the reality of how battered it looked in its final years hauling stone out of the Mendip Quarries.Seen on Westbury Depot on a quiet Sunday afternoon.Note the local kids getting a guided tour of the cab from the sole on duty staffman there with nowt else better to do as the depot was dormant on Sundays!-------------Spring 1976-----------

D1034 'Western Dragoon' stands on Westbury Depot along with a couple of classmates on a Sunday.At this time there was no work whatsoever at weekends so this place was chock full of engines.The 'Westerns' were in the final years of service and had gravitated to freight work as Class-50's had taken over their duties on the mainline.1034 had just a year to go before going to Swindon and the cutters torch. 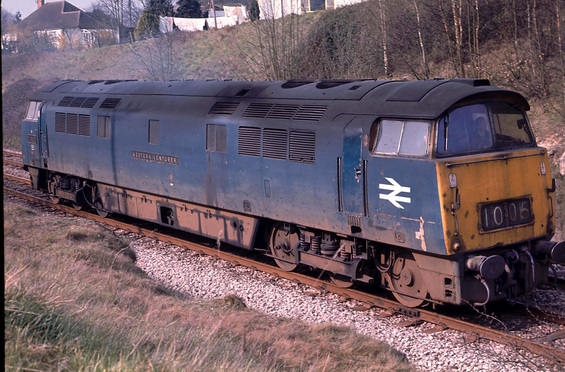 D1005 'Western Venturer' is seen backing slowly 'wrong-line' up the Frome Avoider at Styles Hill on a rescue mission for a failed 50029 on a Paddington to Plymouth working.All very interesting with detonators going off as it approached the stricken 50.I do have other slides of this incident and when I can find them I will present them here. The master shot of the 52/50 double header as it moved off was published in an early 'Traction Magazine' but those dumbo's never returned the slide claiming it was lost in the post-----------------------yea-right!
It eventually went for scrap the following year and had the honour of being the '52' with the most miles on the clock..1.392 million. Try that in a Ford Focus if you can!
..Spring 1975.. 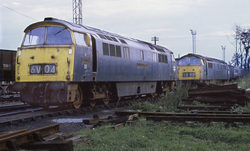 D1066 'Western Prefect' stands amongst the crap and rubbish at Westbury Depot on a day of rest (Sunday).Its last working being '6V04',probably an empty stone up from the Eastleigh area somewhere. 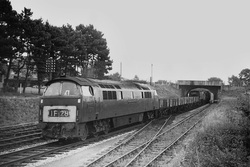 One of the activities during 1968 was the slow but steady clearance of the many steam locomotives stored at the closed Salisbury Depot.This place was used as a gathering point for engines prior to despatch to South-Wales for scrapping.Here is one of those workings.D1068 'Western Reliance' hauls 34057 'Biggen Hill' and a rebuilt Bullied and a Standard Class-5 slowly through Warminster looking every bit like a funeral procession.None of these engines made preservation because they never went to Barry-Island.The Western lasted just 9 more years and was gone by 1977.