This class of unit dedicated to the London-Marylebone to Aylesbury Line operated by Chiltern-Railways.
Built from 1998.A total of 19 sets in 3 or 4 car configuration. 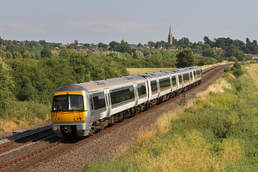 Turbostar 4-car 168003 runs up through Kings Sutton with '1G43' the 15:40 from Marylebone to Birmingham Snow Hill for Chiltern-Railways. 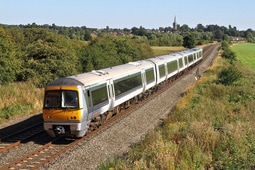 The 'Networker' type Class-168 DMU's are operated exclusively by
Chiltern Railways working out of Marylebone in London.Here is 168003
running up through Kings Sutton on '1G43' the 15:40 from Marylebone
heading for Birmingham Snow Hill.There are 32 units in 3 sub-classes.
The /3 variant of which there are 13 are actually converted Class-170's. 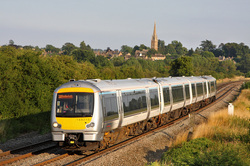 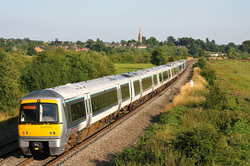 '1G60' from Marylebone (17:47 off) to Birmingham Snow Hill goes past Kings Sutton.Turbo 168002 is seen wearing the latest version of Chiltern-Railways colours. 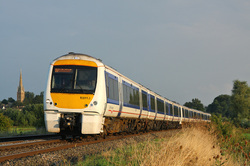 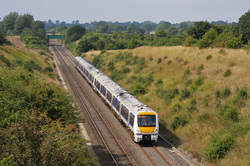 168109/168113 was this strengthened pair heading for London Marylebone.The working was '1H42' the 13:13 from Birmingham New Street going to the Capital.This quite high vantage point is a farm bridge near Ardley,a few miles south of Anyho Junction. 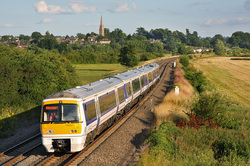 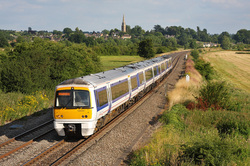 168005 heads for Birmingham Moor Street with '1R50' the 17:18 away from Marylebone.Seen with Kings Sutton Church in the background. 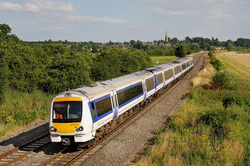 Leading the evening commuter rush out of London is '1R48' the 16:47 from Marylebone going to Birmingham Moor Street passes Kings Sutton.168216 being the lead unit of this strengthened service. 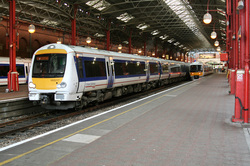