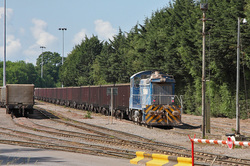 Here is the infamous SW1001 Bo-Bo GM Switcher Number-44 'Western Yeoman II' standing in the yard at Torr Works-Merehead. In truth you can blame the entire current freight locomotive scene in the UK on this one engine.Yes it was that good!  Also of interest in this shot is the set of MBA wagons behind it.Until about a week or so ago these were the ones used on the Didcot-PS to Calvert flyash trains being hauled by 'DCR' Class-56's. 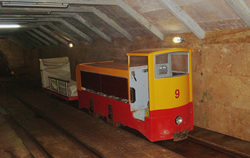 During  an Adriatic Cruise this week took a trip to the Postojna Caves near Koper in Slovenia.These small battery locomotives such as this one (No-9) haul trains carrying over 100 passengers or more on trips into the mountain through narrow tunnels and caverns to visit the fantastic cave network there.The underground rail system is about 3 miles long and the actual caves stretch for over 15 miles.Makes Cheddar Caves look like a pothole in a road!
..09 may 2011.. 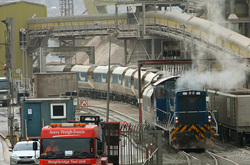 Hard to believe that this intensive looking industrial scene is deep in the heart of the Somerset Countryside. It is the Quarry at Whatley photographed off the road bridge that crosses the line between the Loaders and the Departure Sidings.The American Import SW1001 bo-bo shunter number 120  is seen drawing a full set of bogie hoppers away from the quarry towards the road overbridge.Note the steam issuing from the radiator area of the shunter,this is where it has just passed under the 'dust-dampening' water jets designed to keep the dust loss off the wagons to a minimum. 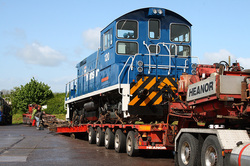 Bo-Bo American built Switcher numbered as Hanson-120 sits on a trailer at Nunney Catch Cafe just a couple of miles from its home base at Whatley-Quarry.It was on its way back after extensive repair and rebuilding after suffering severe damage after a brake failure accident at the Stone terminal there.Sent to Eastleigh where the work was completed,however on the way back the trailer failed(It had started to bend in the middle!) and locomotive had to be transferred to another one to complete the journey here in the Cafe Carpark.All good fun and expertly done by the Heanor crew!